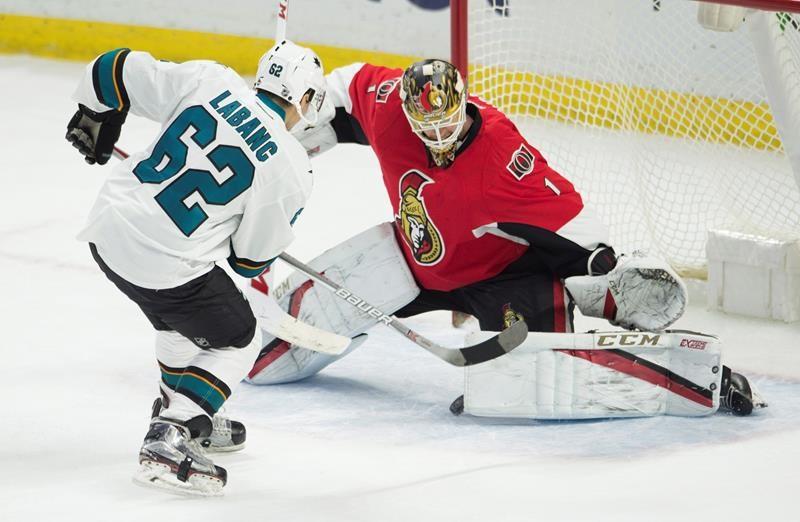 The San Jose Sharks kept their road win streak going with a 4-3 win over the Ottawa Senators in a shootout at Canadian Tire Centre on Wednesday night.

Joe Pavelski’s 10th goal of the season opened the scoring early in the opening frame. Pavelski picked up the puck from Logan Couture and buried it into the back of the net from the doorstep.

The Sharks’ defense suffered a minor let down when the Senators tied the contest 1-1 at 7:01. Ryan Dzingel grabbed the puck from behind the net and sent a wrist shot to Bobby Ryan at the right circle, who beat Martin Jones five-hole for his fourth goal of the season.

The score was tied 1-1 even though the Senators ran up a 11-10 shots advantage through 20 minutes of play.

Brent Burns slipped past the defense, made a smart move in front of the net and buried a five-hole goal past Mike Condon to give the Sharks a 2-1 lead at 11:30 of the second frame.

But the Sharks’ lead was short-lived, as Mark Stone dished a centering pass to Kyle Turris, who hammered home a one-timer to tie the contest 2-2 with 2:33 left in the second.

Marc Edouard-Vlasic took some liberties with Erik Karlsson on the power play. Turris came racing off the bench to start a fight in the final minute of the second. Consequently, Turris received two minor penalties for fighting and instigating, along with a 10-minute penalty for misconduct.

The Sharks put up a good fight, but the score was tied at 2-2 through 40 minutes of play. The Senators gathered 13 shots in the second for a total of 24 as opposed to San Jose’s 16.

Logan Couture had to be escorted to the dressing room after being cross-checked by Mike Huffman. Couture didn’t return to the game. He’ll be evaluated by the team’s doctors on Thursday.

Patrick Marleau netted an unassisted, power-play goal, but the Senators challenged the play for offside. The replay review showed the play was offside prior to the goal. Therefore, the Sharks’ go-ahead goal didn’t count.

Joe Thornton went to the box for high-sticking Dion Phaneuf at 15:16. Erik Karlsson centered the puck to set up Phaneuf, who used a snap shot to beat Jones to put the Senators ahead 3-2 at 16:14.

Burns’ shot attempt was blocked by Derick Brassard, but Chris Tierney barreled in to clean up the rebound to score the game-tying goal at 17:32.

After a 2-2 deadlock in regulation and overtime, the game ended up going to a shootout for the second consecutive night. Neither player scored in the first three rounds of the shootout, but Kevin Labanc came through in the fourth round to hoist the Sharks to a 4-3 win over the Senators.

Jones finished with 28 saves in a San Jose victory. Condon made 26 saves in a losing effort for Ottawa.

Up Next
The Sharks return to action Friday when they face the Montreal Canadiens at 7:30 p.m. EST on CSN California ad 98.5 KFOX.