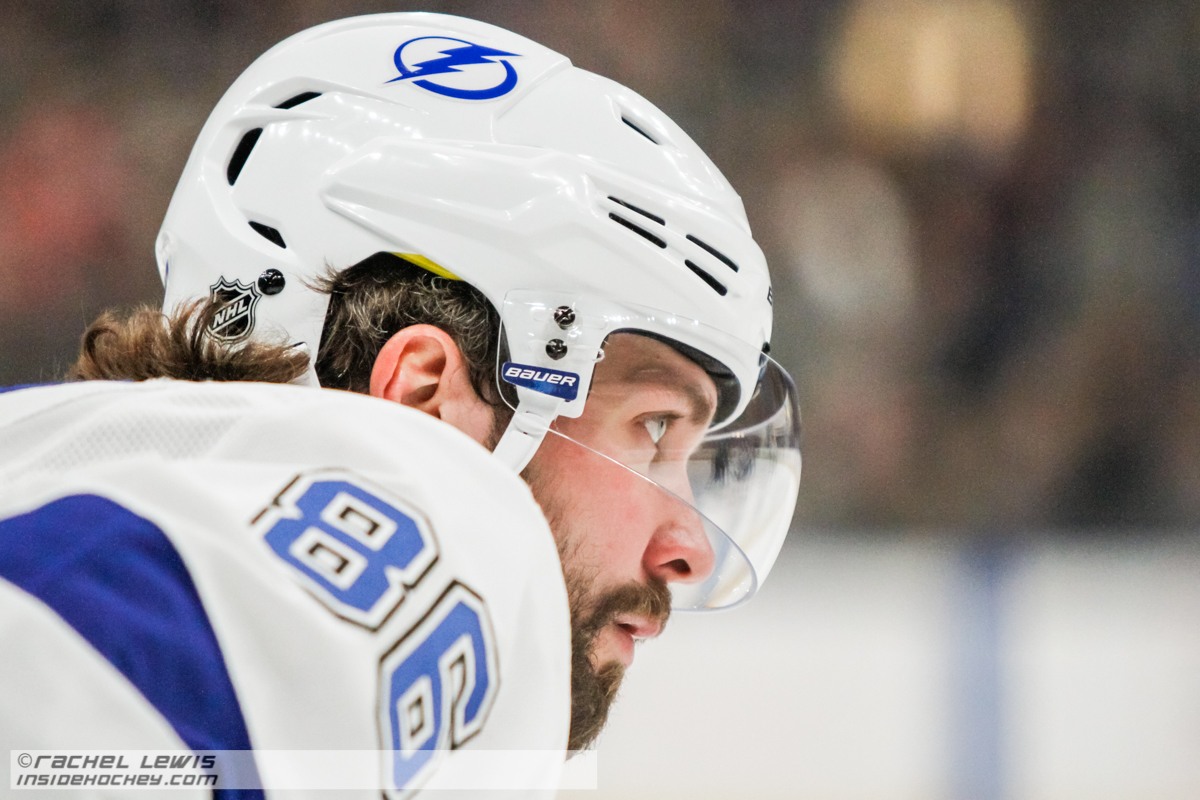 TAMPA – With the vaunted Nikita Kucherov quarterbacking the offense much in the same way Tom Brady quarterbacks the Tampa Bay Buccaneers’ offense, the Tampa Bay Lightning used three assists from Kucherov en route to a 4-2 win over the New York Islanders on Tuesday evening to even the NHL’s semifinals at 1-1.

“We looked fast and we were executing passes and took what there and had some unreal plays by No. 86 (Kucherov) to set up Pointer’s (Brayden Point) goal and Palat’s goal,” said defenseman Victor Hedman. “It was a total team effort and more the way we are used to playing.”

Kucherov set up his teammates with scores in each period. He found Brayden Point with a first period goal, Ondrej Palat on the fly in the second, and Victor Hedman for a power play goal at 9:17 in the third period.

Hedman scored his first goal of the playoffs on a Lightning power play unit that came into the game with a 42.1 percent conversion rate (16-of-38). Going into the game, Tampa Bay’s defenseman were yet to score in the playoffs, so Hedman and Jan Rutta were up for the task.

Kucherov threw Hedman a cross ice pass that he took inside the left circle and fired in through Islanders goalie Semyon Varlamov at 9:17 to capitalize a huge night for the Bolts after the loss in Game 1.

Rutta broke the game open in the third period when he fired a slap shot from the deep right corner of the blue line which gave him his first career playoff goal at 2:15. He launched high and over Varlamov’s right shoulder as the goalie had no time to react. The puck hit between the goal post and crossbar and fell in for a 3-1 Bolts’ lead.

“A nice setup – low to high – and it didn’t hit any pads or sticks,” Rutta said. “I am really happy with that one.”

Kucherov showed his ice-dancing ability in the second as he shook two Islanders in changing directions in the left face-off circle. He then found Ondrej Palat breaking towards the goal. Kucherov shoveled the puck to Palat who deposited a wrister over the top of Varlamov’s outstretched right glove for a 2-1 lead at 13:15.

“He is an elite player – one of the best in the league – and he is so good at finding open ice and so calm with the puck making plays,” commented Hedman. “Palat’s goal is a good example. Not many players who can turn up, turn back down and thread the needle.”

Goalie Andrei Vasilevskiy was solid as he stopped 24 of 26 shots and had a couple of mystifying blocker saves when the game was in doubt. Vasilevskiy still has never lost two straight playoff games as the Lightning moved to 4-0 in postseason games following a loss and 11-0 in the past two seasons.

Point got Tampa Bay on the board first at 8:58 when he was at the right side of the crease and took a back-hand pass from Kucherov. The puck hit Varlamov in the chest and jumped up and clipped the top of the inside of the goal post. This was Kucherov’s first of his three assists of the night.

When Point hit the penalty box though at 13:10 in the first, New York capitalized with a power play goal from Brock Nelson at 13:30 to tie the contest at 1-1.  Josh Bailey passed into the middle where the puck skirted off of Ryan McDonough’s stick and onto Nelson’s waiting blade. It was Nelson’s seventh goal of the playoffs.

From the beginning, Tampa Bay was on a mission to send a statement with their play and otherwise.

It didn’t take long for the ice to be filled with fisticuffs throughout the first period. Center Pat Maroon was involved early and often as he and Scott Mayfield were entangled at 3:15 in the first which manifested itself for later.

Later, Maroon and Matt Martin were given five minutes for fighting at 13:45.

This came on the heels of Point being shoved in the back by New York’s Adam Pelech while Point was on the fly toward the net. Point crashed into Varlamov and the officials gave Point two minutes for goaltender interference. Varlamov left with an apparent injury although he came back to start the second period.

“We all saw the call,” said Cooper. “It was a tough decision for the ref to make, especially when they tell you he put his hands up to hit the goalie and he clearly didn’t do that. It’s a game of high rate of speed and the refs are in a bind when it comes to that.”

Matthew Barzal scored a late goal for the Islanders, his fifth of the playoffs.