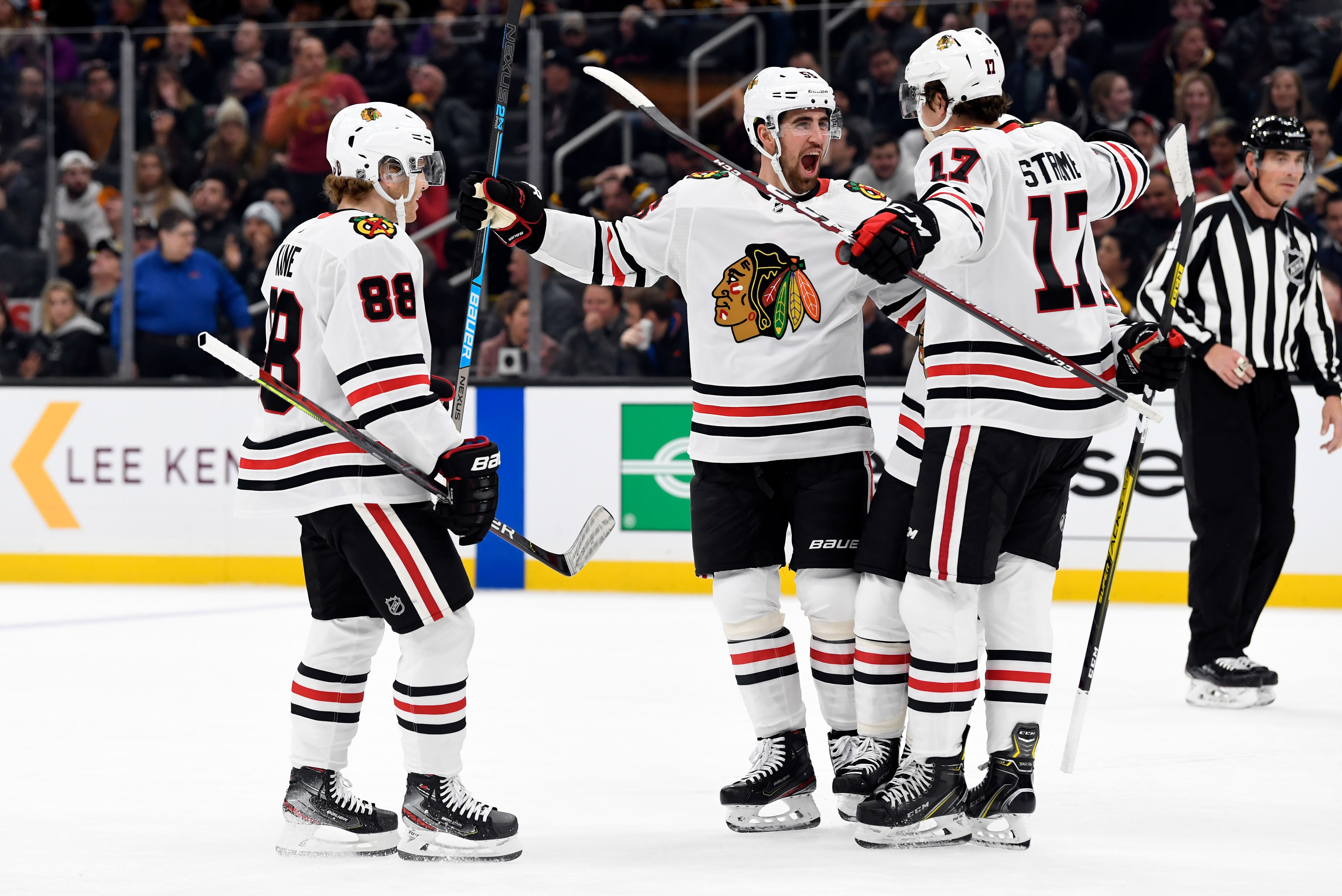 Dec 5th 2019; Chicago Blackhawks center Dylan Strome (17) celebrates with his teammates after scoring against the Boston Bruins during a NHL game at the TD Garden. (Credit: Brian Fluharty)

The Tampa Bay Lightning were seemingly in control of Thursday night’s matchup with the Chicago Blackhawks as they took a 2-0 lead to the locker room at the end of the second period. They had outshot Chicago, 27-17 to that point, but had failed to convert four power play opportunities.

The missed chances would cost them in a major way in the third period as the Blackhawks opened fire on backup goalie Curtis McIlheney with five third period goals in a 5-2 surpassing of the Tampa Bay Lightning in Amalie Arena.

Chicago collected five goals, with four coming in a 7:07 stretch in the third period. Winger Dominik Kubalik recorded a hat trick with his third goal coming at even strength at the 17:29 mark of the third period.

“It was something special,” said Kubalik, who has consistently been able to contribute multi-goal games this season. “Just trying to do the same thing and be around the net because lots of goals are laying there and I have been lucky.”

Kubalik had earlier connected on the Blackhawks’ lone power play goal of the evening when he scored at 11:43 on assists from Duncan Keith and Alex Debrincat. It was Chicago’s fourth game in a row with a power play marker as the Blackhawks had a season-high of three power play goals in Tuesday night’s 6-5 loss to St. Louis.

Kubalik leads all NHL rookies with 29 goals and have seven goals and three assists in his last seven games.

“We have done well since we got together,” said Kubalik of his move to the power play line.  “The first couple of power plays were good and they just didn’t go in. We just stayed with it and kept shooting.”

Tampa Bay took a 1-0 lead at the 15:31 mark of the second period when center Brayden Point scored his 23rd goal of the season on assists from Victor Hedman and Nikita Kucherov. Point collected the puck and literally circled the left face off circle in the Chicago zone. He fired the puck past Blackhawks goalie Corey Crawford on the weak side.

“It’s frustrating, but they are all frustrating when you lose,” said Point. “You can look at the good things that come from games. We have to go to practice tomorrow and see what we did wrong to fix and move on.”

The Lightning scored immediately in the third period to take a 2-0 lead as Nikita Kucherov connected on his 31st goal of the season. Kucherov literally golfed a pass from Point into the net by collecting the puck at the bottom of the right circle.

The Lightning lost their fourth consecutive game after winning 22 of 25 in moving to the 40-win plateau. Tampa Bay is currently sitting at second in the Eastern Conference, with 85 points and are seven points off the conference and Atlantic Division leading Boston Bruins.

“It’s obviously a tough one to swallow,” said defenseman Victor Hedman. “We did a lot of good things for 42 minutes. We take a couple of penalties and they score right after one and then on the power play. At the end of the day, you can’t give up five goals in one period.”

The power play was a major issue for the Lightning as they were 0-for-5 on the evening while missing on all 11 shots with the extra man advantage. The team is 2-of-19 over the last seven games.

“We didn’t have that much success,” Point noted. “Tonight, new unit, new guys different spots. We had to throw pucks at the net. Tough to digest tonight with new guys in new spots.”