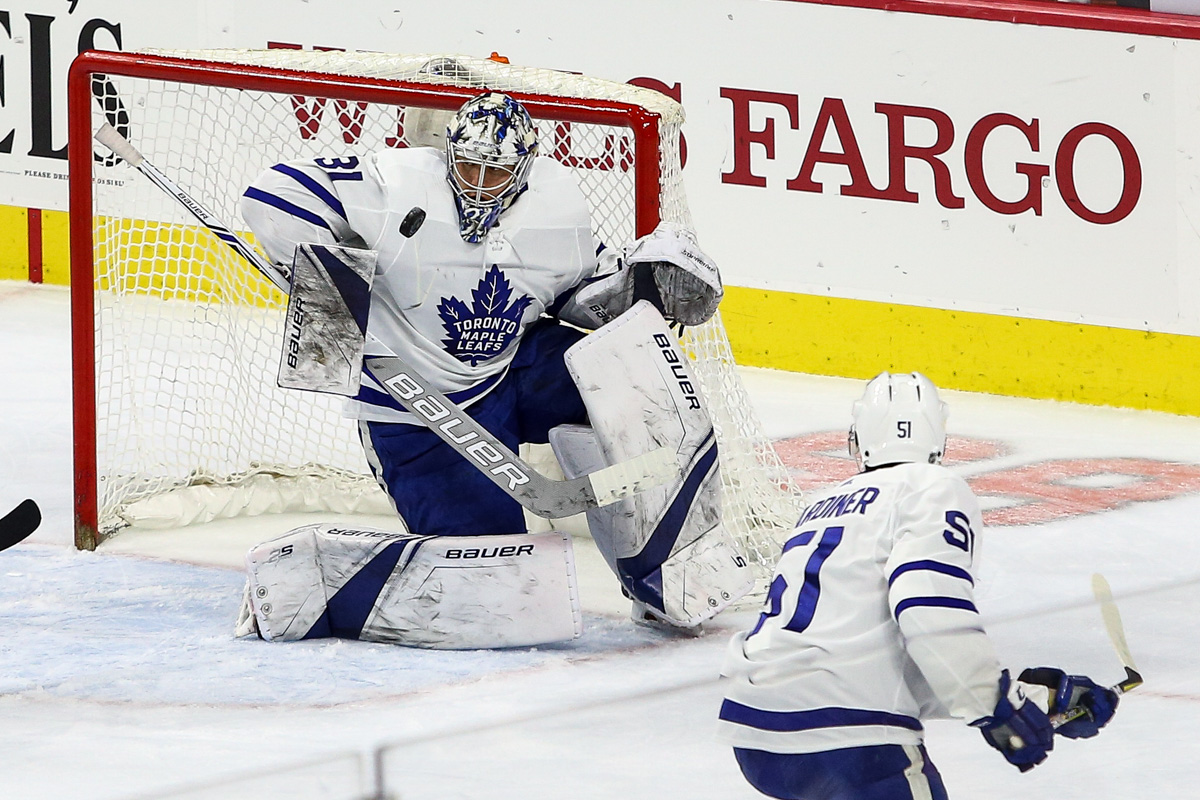 The Toronto Maple Leafs play all three California teams in four days, and they don’t even get to take a bus from LA to Anaheim to ease the road trip. They have to fly to San Jose in between playing the Kings and Ducks. Perhaps that’s why they decided to get out to a swift start against the Kings at Staples on Tuesday night. They need to hustle to get a reasonable number of the possible six points available between now and Friday.

Before the game was seven minutes old, the visitors had taken a two-goal lead. They scored both on the power play.

Obviously, that means that the Kings didn’t help themselves. They took two penalties in the first five minutes. They didn’t take a single shot for nearly half the first period. They were down 11-0 in the shots department when Kyle Clifford put them on the board.

And the Leafs put on the pressure. They kept the puck moving while the Kings stood still on the Toronto power play. When the opposite happened, and the Toronto team took a penalty, the Leafs stayed active in their own zone. They thus killed the Kings’ only chance of the first frame.

By the end of period one, the game had evened up somewhat. The Kings were down 2-1 and behind by 16-8 in shots. Doesn’t sound bad, but consider that this put the Leafs on pace for 48 shots.

The Kings’ goal was a pure, dumb mistake, by Kasperi Kapanen, who put a puck up through center in his own zone for no reason at all. (I’m sure that does a lot for him with Coach Babcock.)  The puck came to Phaneuf, who slapped it back at the net—why not? And Adrian Kempe tipped it past Freddie Andersen in front of the net. Clifford reached as it rolled across the goal line but didn’t get a touch on it.

For Toronto, the bad news: They were victimized by the LA fourth line, who before this moment had a total of four points all year in 46 games played between them.

So here’s the likely message from Babcock at the break: “Look fellows, we got out to an easy lead. The Kings are hoping to beat themselves tonight. Don’t let the opposite happen!”

The second period was a minute fifteen seconds old when the Kings allowed another goal. Or should that read, “When Toronto scored another goal?” Either way, the Kings were—again—standing around in their own end when the puck came off the wall, was skated across the high slot, and fired at the net. It was tipped by Morgan Rielly. Kempe of the Kings may have tipped it and caused the puck to elevate past Peter Budaj.

The problem, really, was that there was nobody in the vicinity of Rielly. He skated across the zone undefended, and winged a shot with nobody close to getting a stick on it.

It happened again with less than five gone in the second. That goal was by Andreas Johnsson, and it marked the moment when Budaj was yanked. Not his fault. Four guys from the Kings were in a straight-across line out behind the last guy in the Toronto colors, as seen from a net-out point of view. One defenseman, Fantenberg, was responsible for three Leafs players who were moving toward the net, unguarded. The puck went from Dermott and Johnsson, and into the cage.

I’m sure that blame wasn’t the message when Budaj was pulled having allowed four goals on 19 shots, and Cal Peterson went in. Budaj might—might—have been responsible for one of the goals against him, the one Kempe tipped. Might. If I were he, I would have been glad that they pulled me. Why stand in with no defense and see your GAA and save percentage soar to to the rafters?

This was Peterson’s NHL debut. He shortly had his baptism by fire. Iafallo of the Kings took a completely nonsense double-minor for high sticking on a clear-in play that rimmed around the boards behind the Kings’ net and came to the half-wall. The Leafs attacked immediately, collapsing to the net and putting the puck into the pads of the kid goalie. He made a save with a leg, his first in the league.

He did himself one better shortly after, when the puck came to the front of the net to Tyler Ennis, and Peterson was moving to his right, catching the shot on the way in as he did a mini-splits.

And then it all went wrong. He batted a puck out to the slot with his paddle and had it put right behind him after Marleau passed it to Kadri coming into the crease area. If you ask, “Where was the defense?” you just haven’t been listening.

So the second period was not halfway over and it was 5-1 for Toronto. The frame went on with no further scoring, and no particular offense by the LA team. They launched 8 shots in the period, same as in the first. The Leafs tapered their total from 16 in the first to 13 in the second, a total of 29. Through two periods. That’s a game’s worth.

Still on pace for mid-40s numbers, Toronto played a conservative third. Why not? They have to be ready to go against San Jose on Thursday night, and the Sharks were at this very minute in a 3-3 tie with Nashville with two periods gone in NorCal. No sweat for them—they get to sleep in their own beds, after eventually winning 5-4 in regulation time.

Getting back to the Kings, they allowed three power play goals on six chances. Coming into the game, they had been pretty good on the PK: 11th in the league, one ahead of the Toronto team they were playing on this night, who came in 12th. But the power plays were a big difference statistically coming in. The Leafs were 6th in the NHL. The Kings? Sat 27th. Toronto had 12 power play goals for. At the end of the night they had 15. The Kings had 34 goals for—total, including all situations. The Leafs were tied for second in the league on the strength of their performance in goals-for.

The scoring ceased after the game became 5-1. The shots ended up 35-23. That means the Leafs took just six shots in period three. The Kings managed seven. Mostly, the Leafs loafed the puck. They didn’t necessarily rest their best guys, either. Sure, Tavares played five minutes and Tylerm Ennis six, to take just one example of a first- versus a fourth-liner, but many of the Leafs’ forwards played in the five-minute range. Nobody played all that hard, is what it appeared.

The Sharks await the Leafs, as was said. The Kings, having finished a season-high seven-game homestand with three losses after winning three of the first four. They now go to Chicago, Nashville, and St. Louis on Friday, Saturday, and Monday of next week.

They sit at the bottom of the league. Toronto is near the top. By  the end of the week, the Leafs cold be there alone.

Kings Coach Desjardins said, “The young guys are kind of thinking the old guys are going to carry them, and they can’t. That’s not fair, and the old guys, they’re better than that.”

Translation: Just like the last guy, who said he was “befumbled” about what to do, I have no answers. Time for the players to step up.

John Tavares got three points on a goal and two assists to stretch his season’s total to 22 in 18 games.