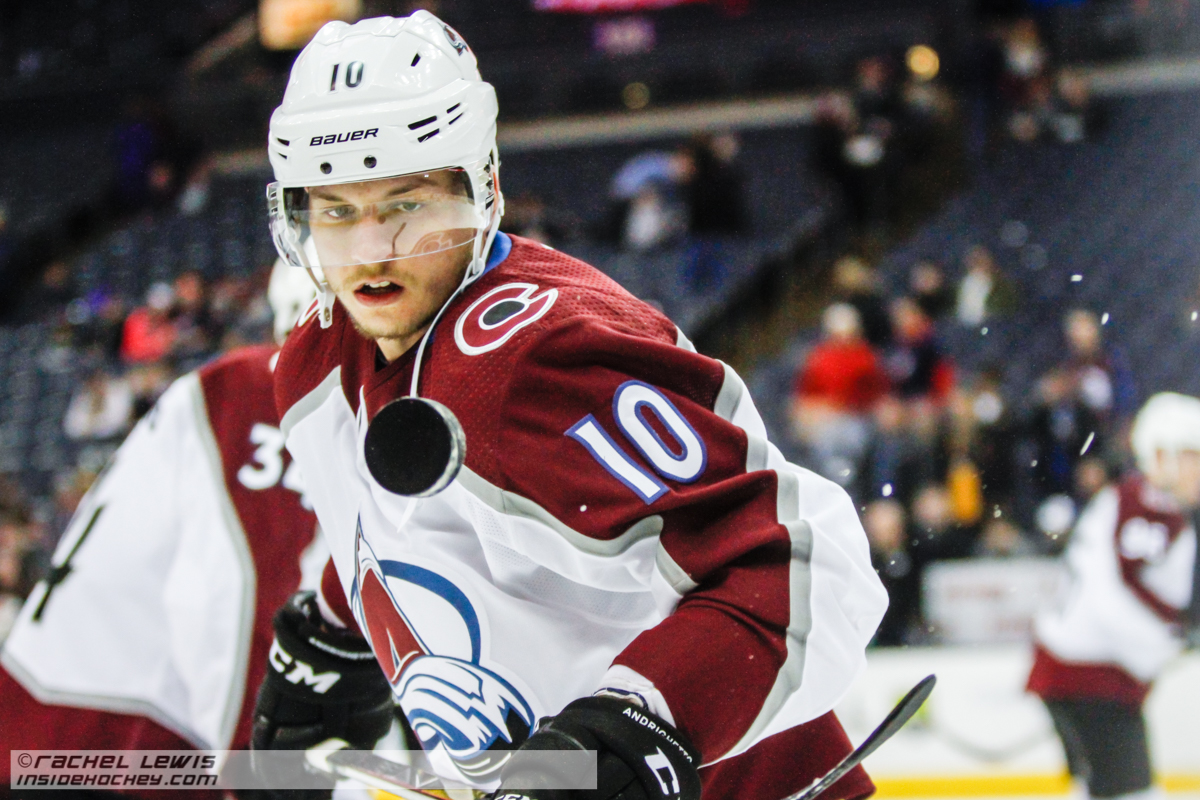 Sven Andrighetto (COL - 10) juggles the puck with his stick during warmups.

In the ongoing saga of who wants and who does not want to get into the NHL playoffs from the Western Conference, the Avs blew a point and squeaked a point on Sunday (Anaheim beat them in OT), then headed up the freeway to faceoff with the Kings. Freeway. Faceoff. Hello?

So they came out with Bernier in net, looking good early, then getting burned twice in the first 15 minutes or so. Both were unfortunate goals, for different reasons. On the first, the LA forward fired a puck off the end boards. Bernier started out for it, then realized it was on a funny angle. He turned backwards and jumped awkwardly out of the way. It bounced under his legs and was slammed into the net by Torrey Mitchell.

Never pass up a shot attempt. What a simple lesson, and so often said about the LA team

The middle of the period was occupied by a fight of the sort you see so often nowadays. Dion Phaneuf hit Mikko Rantanen at the boards, and Nikita Zadorov challenged him to a punch-up. They did that for a while at center, until both were doing nothing but holding on tight, and they stopped it. Both went to the penalty box checking their hands. Probably a show.

Anyway, the Kings were shortly to score another goal. Colorado was on the power play, and Dustin Brown picked up an innocent looking puck at the Kings’ blueline. He lugged it up ice, used a defenseman for a screen, firing it between the legs, and caught Bernier on the far side. The puck sailed over the glove and right into the top corner. Beautiful placement, unless you’re Bernier.

The period ended with the Kings shorthanded again. Mr. Phaneuf didn’t take his good boy pill, apparently, and he shoved Nathan MacKinnon into the end boards, snapping his head back. Got only two minutes for his trouble, so maybe it wasn’t as bad as it looked from a distance.

The Avs messed around with the puck through the nearly-a-minute they had before the period ended, mostly passing at the perimeter. They did get a puck in that Quick had to do a full and glorious splits to save, then another one as the buzzer was about to sound. It went right on him, with a guy in front for a second go.

Still nothing, and the visitors had to be thinking they were in trouble, because the Kings weren’t even outshooting them. It was 7-5 for Colorado.

Period two saw the Avs come on. They mostly controlled the play, and they got one goal out of the deal. That one was on the power play, which at first looked like it was proceeding quite poorly. They messed around with the puck at the right point, almost seeing it go out of the zone at one point. Then the puck went down low on the right side. Quick went down early, and Kerfoot held the puck and dragged a shot, putting it over top of the overcommitted Kings keeper. The puck was on end when it got to Kerfoot, so his wait was not necessarily strategic, but it worked.

The Kings shortly had a power play of their own. The notable event? Phaneuf took a slapshot that pounded into the chest of Zadorov in front of the net. Nothing to do with the earlier fight, naturally. Zadorov slumped over as he headed to the bench.

Bernier did not look altogether steady. The puck zinged over to Michael Amadio and he took a shot. Bernier made the save under a leg, but clearly did not know where the puck was when he kicked the leg out. The puck went out front, too.

Trevor Lewis might have made it 3-1 when he flicked a shot to the net with Kempe standing in front, but that didn’t go, either.

Mid-period, the Rieder-Carter-Toffoli line took over for a long shift. This then gave way to Colorado. Kerfoot put the puck back to Sven Andrighetto for a shot. He saw it gathered back to Quick. Then the puck came out to JT Compher in the slot. He redirected it by tipping the blade of his stick at the puck. It went over the net. He had Quick beaten on that one.

The shots in the second were 11-10 for LA. The total to that point was 17-16 for Colorado, and aside from their dominance in territorial play (if not in shots), they were excellent on the backcheck. Two Kings chances were broken up by a backchecking Avs player, right in front of Bernier.

Some have said that the reason the Avalanche won’t make the playoffs (aside from the obvious—they have one of the toughest schedules to wrap up the season in the entire Conference) is that they have no balance. They have a first line, and that’s about it.

Well, the second line of Andrighetto with Jost and Kerfoot don’t look too bad, in NASCAR-speak. And nobody on this team ever seems to give up on a puck. They could have sat around feeling sorry for themselves after the first. The hockey gods didn’t seem to have it in the cards for them on this night. But this is too important. They have to win. A point would be nice, but not enough. That explains the second period. How about the third?

Kyle Clifford got an insurance goal, making it 3-1 when he grabbed a puck that had knocked off the goalie. But before that, he, Lewis, and Kempe had flown down the ice, passing it back and forth. The shot went in from Kempe. It rebounded high; Clifford picked it out of the air, and he wrapped it around from right to left, stuffing it past Bernier’s skate.

Funny enough, Colorado had an almost exactly similar chance right after, as Martinez let the puck come off the end boards behind the LA net uncontested. Carl Soderberg slammed it at the net at the left post. It was stopped.

A few other chances to change the score included Kempe getting one in close and flicking it at Berneir, who made the save, and Kopitar and Mitchell going down together two-on-two. Mitchell ended up flying into the crossbar. After that, Carter streaked into the Avs zone on the left side, and took a long shot. Bernier may have gotten a piece, and it went wide.

A couple of big hits also highlighted the period, including Folin  on Nieto and Comeau on Clifford. The Kings prevailed despite about two minutes of empty-net time that could have allowed a Colorado goal. The LA team now needs to gain one point on Colorado in any fashion (the Kings gain one or more, Colorado loses one or more) to make the playoffs. If they don’t do that . . . . You can guess what will happen over the summer.

Here are the coaches’ summaries of the night.

Stevens of the Kings: “Colorado is a really tough opponent and you see what guys are willing to do this time of year when they’re emotionally invested in a game. A great game by our goaltender, you got Dion [Phaneuf] who set the tone early, standing up for his teammates, you got Cliffy [Kyle Clifford] scoring a big goal, and you got [Christian] Folin and [Tobias] Rieder jumping in front of pucks early. Those are the types of things you need from your hockey team. I thought everyone was willing to dig in when the game mattered. We all know the enormity of this game for both teams. We knew it was going to take a second and third effort on a lot of plays to get it done. It was good to see the guys emotionally invested the way they were.”

Bednar of the Avs: “Well, we made a couple mistakes real early on. We missed some checks coming out of the offensive zone. They had a 2-on-1 and then a breakaway there early. We survived those and then they got a couple strange goals there. But, I thought as the first period went on, we got better and better. We had a really good second period. We limited their chances and limited their shots. We need to try to get something going offensively. We had a couple good looks, but [Jonathan] Quick was up to the task. That’s about it. We need to find a way to score a goal or two and hopefully try to keep one or two of those out of the net.”

Sheng Peng of HockeyBuzz stopped by. Dave Pagnota of The Fourth Period was next to me in the press box. Good to see both.

Several Kings players have reached personal bests this year, including Drew Doughty (0-1=1), who extended his career-high with his 49th assist. He also tied his career-high in points with 59 (set in 2009-10). Also Anze Kopitar (0-1=1), who registered his 56th assist of the season, extending his career-high in assists and points (91). He currently ranks sixth in the league in points and tied for 10th in assists. Finally note that Trevor Lewis (0-1=1) tallied his 26th point of the season (14-12=26), surpassing his career-high of 25 set during the 2014-15 season. It also marks his12th assist, tying his total from last year. (Kings press notes get credit for these facts.)