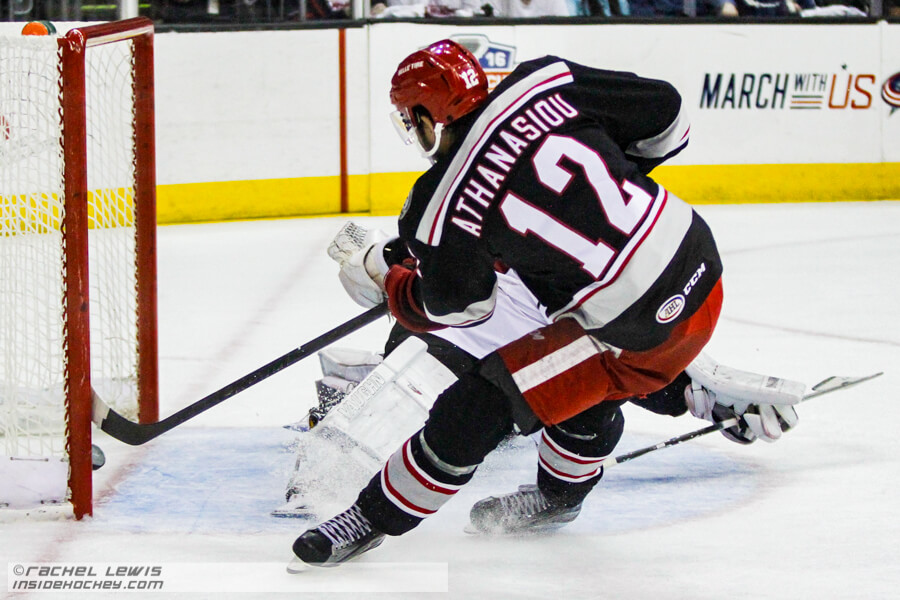 Hope  gave way to disappointment for  both  SoCal hockey teams on Thursday night. The Kings, playing at home, lost to Minnesota 4-3 in OT after leading the game 3-1. The  Ducks dropped a  5-2 contest to Vegas in Nevada after rallying from an early deficit to tie their game at 2-2.

Each game showcased some hopeful signs before ending as it did. The Ducks were happy to see one of their youngsters, Max Comtois, score both goals in his 40th career game. The largest part of the Ducks’ strategy  this year is to have their young players, including Comtois, Troy Terry, and Sam Steel, playing together on this night, start to assert themselves as being the next generation, taking over from former stars Corey  Perry, who left prior to last year, and Ryan Getzlaf, now in his 16thyear with the team.

The Kings saw new addition Andreas Athanasiou start the season with a goal. He was recently signed after playing briefly for  Edmonton at  the end of last season after breaking in and having five good years with the Red Wings. His  goal came off the rush on a pass from Jeff Carter. It was not Carter’s only contribution. He also poked home a goal with a few seconds on the clock in the second period after a faceoff win by team Captain Anze Kopitar. Carter, it has been noted, appears faster this season than he’s ever looked before. Sporting longish hair and looking lean in the face, he devoted himself to having a resurgence after off-season hip surgery. In fact, he is one of the players that took maximum advantage of the long layoff (the Kings last played March 11th) by having his operation right after the league shut down. He has thus had 10 months to get better, and it shows.

Athanasiou’s goal came after Carter streaked down the right side and put a puck off goaltender CamTalbot’s pad. Athanasiou was fast enough to pace Carter and quick with the stick to shove home the rebound.

The Kings, playing in front of an empty Staples Center, started out with a familiar line—Kopitar, Dustin Brown, and Iafallo. They also ran Carter out with Athanasiou and Blake Lizotte, also noted for his speed. Notable in their lineup were players taking over the numbers left by departed former teammates, including #22 (Trevor Lewis—now Athanasiou)  and #13 (Kyle Clifford—now Gabe Vilardi).

Scorers for LA aside from Athanasiou were Carter (as noted) and Dustin Brown, who notched the 300th of his career. Kopitar recorded about 23 ½ minutes of ice time.

The Kings did their own damage by taking six penalties on the night to four for Minnesota. Los Angeles did not yield a power play  goal, but they scored one, the marker by Brown.

How does the performance bode for the Kings? Kopitar and the coach both said afterwards that getting a point was good, but that they were disappointed that the team let the Wild come back to win. McLelland said it was “exciting to get back to playing” but that the game was one of ups  and downs. He did credit his team for scoring “ugly, battle-type goals,” but he said it was unlikely that they could put in four on a given night. Three, yes, that he said they could do,  so the team will look to tighten up play for their Saturday night reprisal game against the Wild. Fans hope that doesn’t mean they  will go back to the choking style that has characterized team play over the past few seasons.

And the Ducks? They see Vegas again on Saturday. Goaltender John Gibson, a gamer who expects the majority  of the starts this year, needs to be better from the get-go if the team is to have a chance to win. He allowed two goals in just over two minutes to start Thursday’s game.

If he’s not better, gaining no points when four could have been had will be the kind of season’s beginning that the Ducks have overcome in the past but might find it harder to bounce back from in a shortened season.

The Kings, meanwhile, look to carry the momentum they  had when they  ended last year with seven straight wins. Hopefully one OT loss doesn’t start to run the cars off the track.

Mark Alt played in his 19thcareer game for LA, recording  about  11 minutes. He is 29, with most of his eight years of pro hockey having been played in the AHL.  He has previous NHL stops in Philadelphia and Colorado.

The team will likely have Sean Walker and Kurtis MacDermid back from Covid protocol on Saturday  as well as goaltender Cal Petersen. Backing up Quick was Troy Grosenick, who is 31 and has three NHL games on his record, the  other two being back in 2014-15 with San Jose.

Brian Kennedy is a credentialed NHL media member and member of the PHWA (Professional Hockey Writers Association). For precautionary reasons, he is reporting this season from his home in Southern California. Follow him on twitter @growinguphockey.