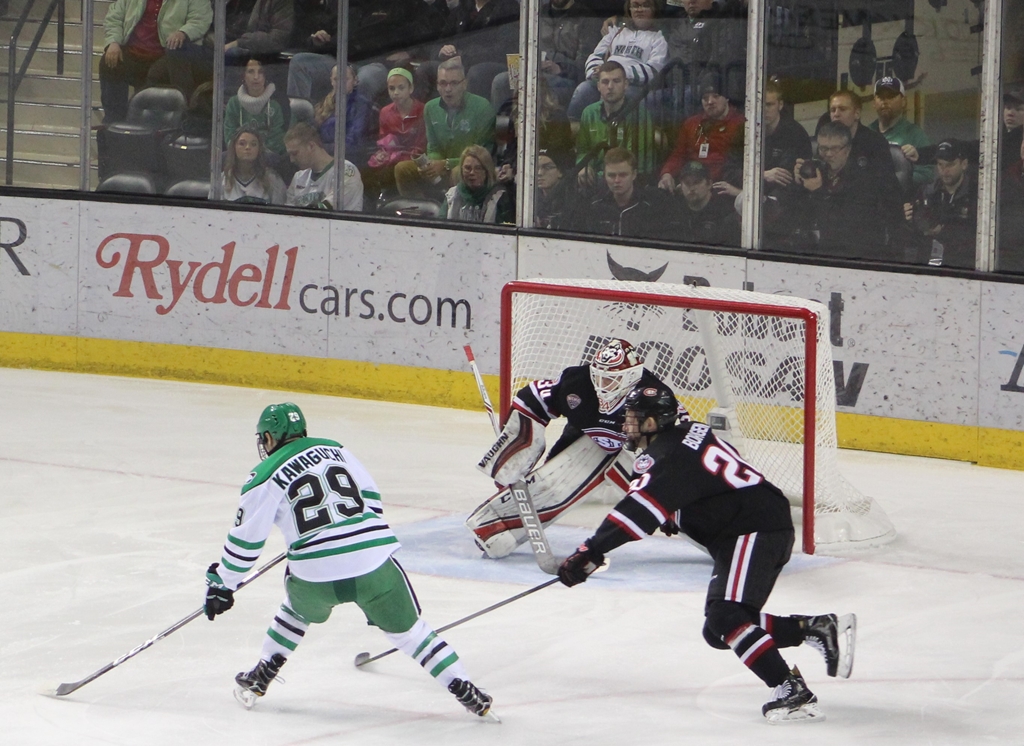 University of North Dakota senior forward Jordan Kawaguchi is a special player. He’s electrifying and brings the fans out of their seats. On Wednesday night, the Abbotsford, B.C native reminded us why he was a Hobey Baker Hat Trick finalist during the 2019-20 season.

With the game tied 3-3 at the end of regulation, we’d go to 3-on-3 overtime. On the opening faceoff, sophomore forward Shane Pinto would win the draw. The puck ended up on Kawaguchi’s stick. He entered the o-zone. With a quick wrist a shot from the left faceoff circle, the game was over in eight seconds. Dager!

“From day one, he’s been an impact player for us,” head coach Brad Berry said. “He loves when the puck’s on his tape in those situations. You love to see him have individual success which gives us some teams success. He’s an unbelievable leader.”

Only 8 ticks in, Kawaguchi scores his second OT goal of the #NCHCPod for @UNDmhockey

At the 7:54 mark of the second period, Kawaguchi would join the 100-point club assisting on Shane Pinto’s 4th goal of the season. In his 116th game in a UND uniform, Kawaguchi would push his point total to (33g-68a–101pts). While playing in the Omaha Pod, Kawaguchi is the only player to record a point in every game. In eight games, he’s scored (3g-8a–11pts), he’s also scored two game-winning goals and a power play goal. Tonight’s game-winning goal in overtime was Kawaguchi’s fifth of his career.

#KawaHobey has FIVE career OT goals, he's been in on all five game-winners (2G, 3A) this season (leads NCAA) and he has a point in all eight games this season. https://t.co/xgC1iegl8b

The game was an exciting affair. UND would race to a 3-1 lead before the Huskies clawed their way back tying the game with goals from Nick Perbix and Veeti Miettinen.

While no one is making any excuses, UND is shorthanded. They’re playing with only 17 healthy players. There are no healthy scratches. That could wear on a team, but the Fighting Hawks haven’t used that as an excuse. With an injury to Ethan Frisch and the two d-men at the World Junior Championship, UND only has five healthy defensemen. The Hawks have managed their off time wisely.

“We played Sunday night, and then we took Monday completely off, Kawaguchi said. “We’re in finals week right now and our guys are going through exams. Tuesday, we had a team practice for 20 or 30 minutes just to get on the ice, and get our feeling back, and (today) we had a morning skate, which was optional.

“I thought our guys did a good job of gutting out a game with an undermanned squad,” Berry said. “I thought we had a good start. We had some good juice, good energy, and got the lead. We gave up an unfortunate goal last minute in the second period when we had a two-goal lead. I think it gave them a little momentum. The big thing was making sure that we got the five-minute kill in the third period, and then we got rolling from there. We’ll take the two out of three (points), and we’ll move on to Saturday.”

? Pinto poppin' on the power play@UNDmhockey takes the lead midway through the 2nd