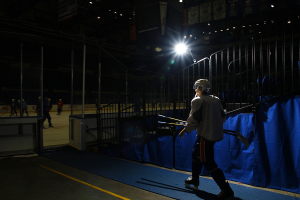 After an amazing 2014-15, Michael Dal Colle is eager to take the next step this season. The Isles first-round pick of a year ago is back at rookie camp and ready to get the new campaign started.

“This is just the first step in trying to make the main camp,” Dal Colle said. “Everybody’s trying to make an impression and then follow through into September.”

Last season was a big one for the Richmond Hill, Ontario, native. He was drafted fifth overall by the Islanders and then had another standout season playing for Oshawa of the OHL. In 56 games, the 6’2” winger scored 42 goals and 93 points during the regular season, then added eight goals and 31 points in 21 games to help lead Oshawa to a Memorial Cup title. He was a third-team OHL All Star during the regular season and earned a spot on the Memorial Cup All-Star Team as well.

“Oshawa had a great team this year, we were well coached and everybody bought into our system,” Dal Colle said. “Obviously we got to the Memorial Cup and won it and that was an unbelievable experience.”

Scouts love Dal Colle’s hands and vision. He has very good stickhandling ability which is rare in today’s game. He also sees the ice well and is able to pass the puck to open teammates as well as any prospect from the 2014 draft.

When asked about his style of play, Dal Colle said, “I’m a big winger. I like to use my size down low and create chances off the cycle. In Oshawa, that’s the way we play. I’m kind of used to that style of game.” 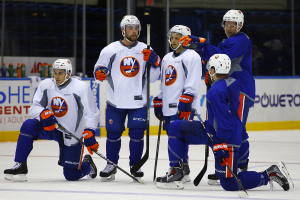 This is Dal Colle’s second Islanders rookie camp and he feels more ready and comfortable the second time around. “I’m more confident than last year, Dal Colle explained. “It was right after I was drafted so I really didn’t know what to expect. Coming from the experience last year, I know what to expect this year so, I feel like I’m more confident, on and off the ice.”

When asked about what’s different for him this season, Dal Colle said, “I think I got stronger than last year. For me, that was the biggest emphasis, getting stronger, putting on weight and working in the gym. So this offseason is big for me.”

Dal Colle knows what he needs to do to take the next step in his career and what he is working on this offseason. “[I’m] getting stronger and working on my skating,” he said. “I want to get faster. That’s been the emphasis since I was 14 or 15. It’s pretty continuous every off season.”

The Blue and White Scrimmage this Wednesday at the Barclay’s Center is a great opportunity for Dal Colle and all of the rookies at camp. “I want to play my game to the best of my abilities and prove I have a chance to make the roster this year.”

If he plays to his potential, Dal Colle has a very bright future ahead of him and Islanders fans are eager to see what he can do.