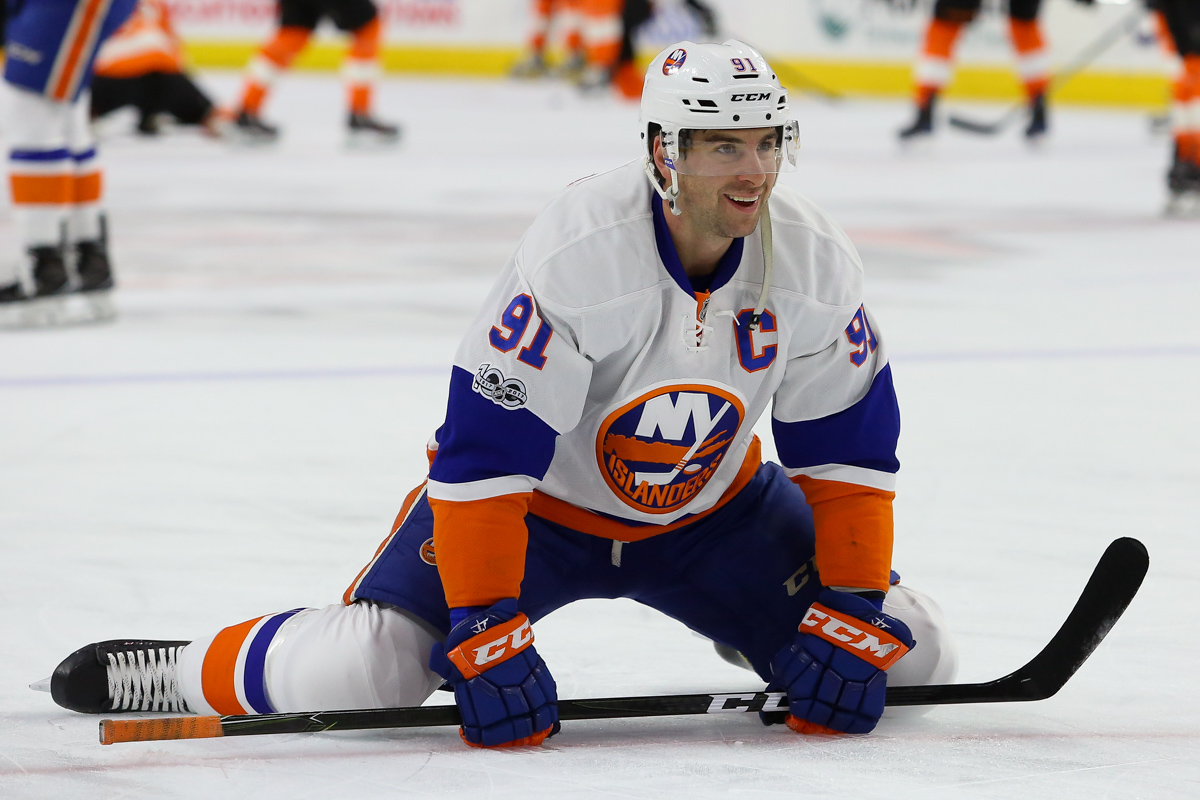 The New York Islanders got a badly-needed 2-1 win over the New Jersey Devils Friday at the Barclays Center, but the victory was overshadowed by a lower-body injury to captain John Tavares in the final minute of the game.

Tavares appeared to get his skate caught in the net while swooping behind the Devils goal and he fell to the ice clutching his hamstring. He needed the help of teammates to skate off the ice and was scheduled to be evaluated by team doctors on Saturday according to interim head coach Doug Weight.

Weight appeared to be preparing to carry on without Tavares on Sunday afternoon when the team plays the Sabres in Buffalo.

“It’s a big blow any time you see a player go down and seems he’s in distress,” Weight said. “But these guys have been around. Any time injuries occur, it’s not fun, but it gives somebody a chance. There will be more minutes to throw around.”

The rest of the team was trying to remain optimistic in the face of the potential loss of their best player and captain.

“It’s not good, obviously, when you see John [Tavares] go down because he’s our captain and he’s a very important part of this franchise,” Boychuk said.

The game itself was not pretty to watch as the Devils had a long parade to the penalty box. The Islanders finished the night with nine power-play chances including three 5-on-3 chances that totaled 3:09 but failed to result in any goals.

The Islanders clicked only once with the extra attacker when Anders Lee scored on a rebound of a shot by Johnny Boychuk on the first power play of the game. Lee was a strong presence in front of New Jersey netminder Keith Kinkaid all night and picked up his team-leading 29th goal of the season at 5:44 of the opening period.

The Devils looked lost for most of the game. The visitors had trouble putting plays together and their passes often seemed out of sync.

“I felt we were good in our own zone,” Weight said. “We were stopping the puck and we were a physical team too. It was a 2-1, ugly win, but I liked our game.”

The Islanders took a 2-0 lead in the closing minutes of the second period when Anthony Beauvillier scored his ninth goal of the season off a pinpoint pass from fellow rookie Joshua Ho-Sang. Jason Chimera also assisted on the goal to earn his 400th career NHL point.

The line of Beavillier, Ho-Sang and Chimera was the Isles most consistent of the night. All three players have great speed and the trio kept the Devils on their heels for most of the game.

“Chimera can fly and Ho-Sang can make plays,” Beauvillier said. “The three of us all have speed and we used it tonight and it really paid off. It’s a good mix and it was clicking for us our first game together.”

The Islanders lost the shutout when Adam Henrique scored New Jersey’s only goal at 11:23 of the third period. Starter Jarslav Halak was rarely tested by the Devils popgun offense but played a strong game and made 26 saves to earn the win.

The victory pulled the Islanders to within four points of the Boston Bruins in the race for the final playoff spot in the Eastern Conference. Both teams have five games left to play.

The playoffs were already a long shot before this game, but losing Tavares for any length of time would make the task even more difficult.

“It’s not a great scenario, obviously,” Weight admitted. “John’s a huge engine and plays every single situation you could ask for. You’ve got to figure out who we’re going to get up here. We need guys to come in, step up and contribute.”

The Isles expect to hear more about the status of their captain on Saturday. With or without him, they need to practically win all of their remaining games and get some help to reach the postseason.

The Islanders celebrated Autism Awareness Month with a special ceremony before the game.