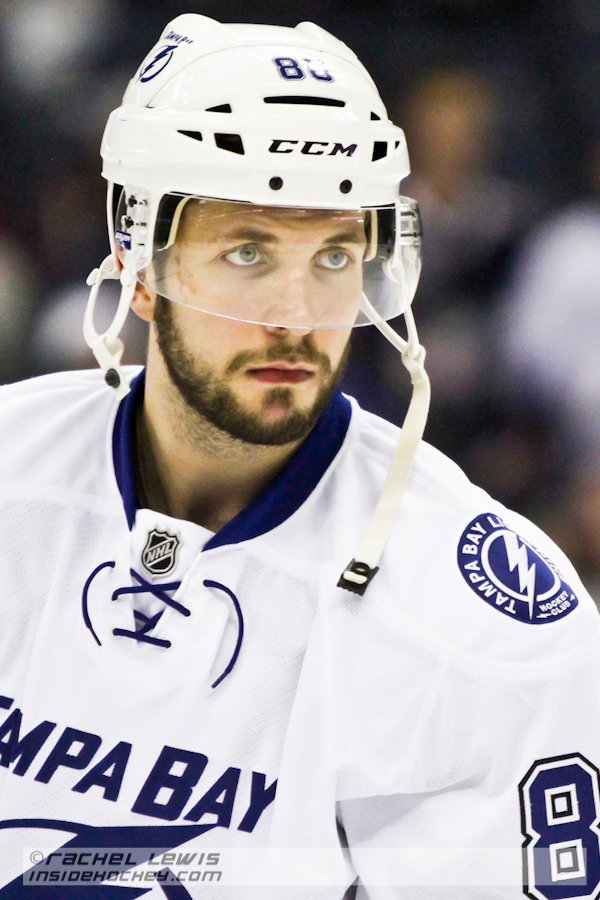 On a night when pro wrestler Shawn Michaels, the original Heartbreak Kid, came to Pittsburgh in honor of the Penguins’ HBK line, the Tampa Bay Lightning broke the Penguins’ hearts instead.

In a span of 1:31 to end the first period of Game 5 and start the second, the Penguins built a 2-0 lead that seemed to have them well on their way to a 3-2 series lead. Midway through the second, however, it took just 1:10 for Tampa to score twice and make it a brand new hockey game.

Those goals came after yet another failed Penguins power play chance, which has gone just 3-for-16 in the series.

“When we had the 2-0 lead, we had the chance on the power play to get that third goal, and they score right after it,” said Penguins head coach Mike Sullivan. “I thought we could’ve just tried to simplify the game to get the momentum back, because I think they got a boost [from the penalty kill].”

Pittsburgh battled back to end the second, with Chris Kunitz fighting traffic in front of the net to put home Evgeni Malkin’s rebound and put the home team back in front, 3-2.

But, instead of pushing the offense in the third period, the Penguins tried to protect the narrow lead. With 3:16 remaining, playing it safe came back to bite them.

Shortly after the Lightning’s Ryan Callahan missed out on a sure goal that clanked off a post, behind Pitsburgh netminder Marc-Andre Fleury and fluttered just along, but never over, the goal line, Nikita Kucherov got one that did count on a speedy wraparound.

With momentum swinging the Bolts’ way and Fleury looking increasingly shaky in his first start since March 31, things didn’t look good for the Penguins heading to overtime. And it took Tampa Bay just 53 seconds to win it, when Jason Garrison sent a shot to the net that deflected off Tyler Johnson’s backside and into the net.

“I was just out there in front. I saw [Garrison] start to shoot it, and I thought it was going for my head again,” said Johnson, who sustained significant injuries to his face in the Game 4 warmup. “So I turned around, and I got lucky. It just nicked me. I wasn’t sure if it hit me or not, but I was excited to see it in the back of the net.”

Just like that, the Lightning had come back to win the game, 4-3, and take a 3-2 series lead back to Tampa with the chance to eliminate the Penguins on home ice Tuesday.

“I get to watch them 100-plus times a year, and it’s a lot of fun to be their coach,” said Lightning head coach Jon Cooper. “I’m not saying they don’t give you ulcers, but there’s a quiet calm about that group. Even when we’re down 2-0 midway through the game, there wasn’t panic. There’s just a lot of confidence in that group, and they knew what they were doing.”

The Penguins’ best defenseman, Kris Letang, was on the ice for all four goals against. Pittsburgh also felt the loss of Trevor Daley, also one of their best defensemen since he was acquired in December, who broke his ankle in a collision with Callahan in Game 4 and is out for the rest of the season.

“For most of the night, we were a pretty good hockey team,” Sullivan said. “We were playing the game the right way. I thought we had a lot of offensive zone time, we generated a fair amount of scoring chances, we controlled the shot clock. We did a lot of things that, going into this game, we set out to do. We just need to find the back of the net a little bit more.”

The Penguins’ trademark resilience had prevented them from losing back-to-back games since January, or when they held a second-intermission lead all season. With those markers now broken and their season on the line, they’ll face their toughest challenge yet.

“This is the first time we’ve been in this position, and I know our guys will respond the right way,” Sullivan said. “They have for four, five months now. Anytime your back’s against the wall, you have to heighten the urgency, heighten the intensity that much more.

“We’re all disappointed we didn’t get the result tonight, but we can’t change it. So we’ve got to gather ourselves, go back out and try to win a game. This group has done a terrific job all year of just staying in the moment – not dwelling on the past, not getting ahead of itself, just trying to focus on that one game at hand.”

For Fleury, who allowed four goals on 25 shots, it was far from the night he’d hoped for in his first start since sustaining his second concussion in three months. The team had played well in front of him in the third period of Game 4 when he replaced rookie Matt Murray, and Sullivan decided to hand the reins back to the franchise’s longtime No. 1 goaltender despite the possibility of rust.

“It wasn’t the best I’ve felt in a game, but I’ve been practicing a lot; I should’ve been better,” Fleury said. He was especially hard on himself for the goal that cut the Penguins’ lead to 2-1, a short-side shot from Alex Killorn that trickled behind Fleury but lingered at the goal line for a moment while he searched for it in vain. “That was stupid. Tough to lose.”

“I’m not going to assess his game right after the game,” Sullivan said. “Obviously it’s a disheartening game we just lost. I’d rather digest it a little bit before I jump to any conclusions.”

The Penguins, facing elimination for the first time this postseason, can’t do much other than turn the page quickly.

“We have character,” said forward Beau Bennett, cleared from injury and playing his first game since early April. “We turned around our season, and I think we can turn around this series as well.”

“It’s one game at a time,” said Patric Hornqvist, who scored the Penguins’ second goal from his usual spot in front of the crease. “It’s not first to three; it’s first to four.

“Obviously they’re in a better spot than us right now but, if we play the game we can, we know we’re going to be fine. We’re in a tough position, but there’s no doubt in my mind we’re going to come back here for a Game 7.”