It’s Halloween. The time of year where friends invite you to parties to show off their topical costumes; kids totally respect the integrity of a “please take two only” sign on the candy bowl; and everyone but me apparently has Olympic-level pumpkin-carving skills. It’s a special time for sure. The day also marks the end of the first month of NHL hockey and offers at least a vague idea of how teams might fare this season. By this time next month we’ll have an even clearer idea. After all, teams can only mask their inefficiencies for so long. Let’s visit some of the glaring tricks and treats thus far. 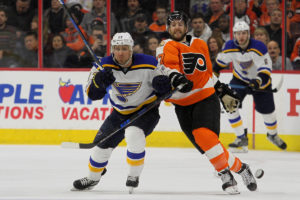 The Blues entered the season with a ton of question marks, largely due to the rash of players inactive on opening night. The prospect of no Patrik Berglund (shoulder), Jay Bouwmeester (ankle) or Robby Fabrri (re-injured knee, out for the season) looked to be daunting for a St. Louis team playing in what has recently been the league’s toughest division. Flash forward some four weeks later and the team is only off to a 10-2-1 record to match the best start in the franchise’s history. Rookie, Vince Dunn has come in and played well on defense, helping the club patch a major hole in Bouwmeester’s absence. They’re tied for third in 5-on-5 scoring and behind a more confident Jake Allen (7-2-1), they’ve allowed just over two goals/game. This team doesn’t look like its in disguise, led by 2010 first round picks, Jaden Schwartz (17 points in 13 games) and Vladimir Tarasenko (14 in 13) , the Blues a home-heavy November schedule, which bodes well for them to keep it going.

Or should I just say ‘ick’? The 3-7-1 Sabres have been awful to open the gate. They’ve been outscored 43-29; surrendered six short-handed goals (tied with the Islanders for most in the league); and have earned just three points in five tries at home. Buffalo’s only saving grace is that star forward, Jack Eichel inked his eight-year, $10 million per season contract before the disaster start took off. As seen last week, he’s not too happy with the start or the team he’s committed to for what should be the prime of his career. Long-term, he stands to be building block to something special. But right now, the team is a mess and it doesn’t look like it’s going to stop when the calendar flips to November.

Highlight of the night: Jack Eichel snaps his stick in half #sabres pic.twitter.com/mJUYqeP4Mi 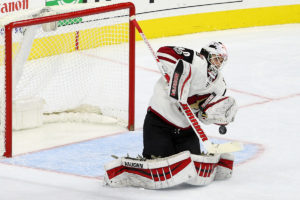 How?! How can the Coyotes, coming off their first win of the season–in game 11– be a “treat.” Let’s consider that they are four points below the Oilers (who have surprisingly struggled after turning the corner last season) and that they are allowing more goals than any other team in the third period–something that was costly in their contest versus the Devils on Saturday, blowing a 3-2 lead in what was their best showing to date. So where’s the treat? Well, there’s a couple: For one, Clayton Keller (13 points in 12 games) is the early favorite for the Calder and rookie of the year honors–Arizona’s only chance at being associated with any kind of hardware. Then there’s the 2018 NHL Draft which figures to be a good one and the Coyotes could stand to have the best odds at the likes of Rasmus Dahlin or Andrei Svechnikov. So while their offseason additions might seem like a trick given the direction of the season, it may result in a pretty nice treat.

Not only are the Rangers tricking you, they’ve been tricking themselves. Fooling themselves into believing that their ‘rebuild on the fly’ was really going to work. Derek Stepan and Antti Raanta were moved at the draft for Anthony DeAngelo and Lias Andersson (by way of the seventh overall pick). Since training camp concluded, DeAngelo has been demoted to the minors while Andersson was returned to Sweden for the duration of the season. Henrik Lundqvist’s rebound season hasn’t panned out just yet–he’s 2-4-0 with 3.12 GAA. New York, with its 3-7-2 record has been tricking itself into thinking this could work, that the subtraction of its best center was going to make them better for this season. The deal itself might not prove to be that bad, especially if Andersson can become an appreciable player but the current prognosis isn’t favorable. 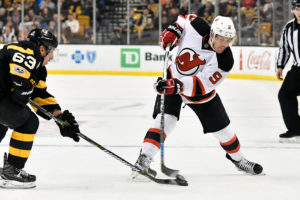 It’s not your father’s Devils anymore. They were called the fastest in the league by Senators head coach, Guy Boucher. They have the ability to score up and down their lineup, highlighted by their leading goal scorer–a bottom six winger named Brian Gibbons. He’s become a penalty specialist and part of John Hynes’ “Identity Line,” which has been their best even-strength trio (alongside Pavel Zacha and Jimmy Hayes) for the last two games. There’s the rookies led by first overall pick, Nico Hischier and collegiate free agent, Will Butcher. Oh, and there’s Taylor Hall, who admitted that for all the success the team is having he wished he could score even more. Saturday versus Arizona he potted two.

“He’s one of our best players,” Hynes said. “He’s a real important part of our team. He’s a real determined player  and he wants to win. This weekend with him you’ve seen a guy that’s said he wants to win, but his actions are backing up that their is a true committment to win and not when it’s easy.”

Hall and the Devils have been a surprising treat this October and surprisingly sit atop the Metro. They’ll shoot to stay their ahead of a busy November schedule with a pair of road trips.

Don’t let the two-time reigning champs, the Penguins fool you. Yes, they’ve yielded just one less goal than the last place Coyotes and yes, they have a bit of a situation on their hand when it comes to the backup after Antti Niemi’s stay lasted all of three games and 16 goals against. But they’re also atop the league in shots generated–roughly 35/game and six of their seven victories are in one-goal contests. They also have Sidney Crosby (11 points in 13 games) operating the first line with youngsters, Jake Guentzel and Connor Sheary. They have depth top to bottom up front. Meanwhile their defense has proven to be reliable despite injuries, working on a committee-based approach. Kris Letang is healthy for the time being, so that’s a huge plus. It’s also another reason to believe the 7-5-1 start isn’t an accurate portrayal of what they really are–yet again a cup contender. October may have been more of a feeling out month for the Pens, but would anyone be surprised if they took off in November?