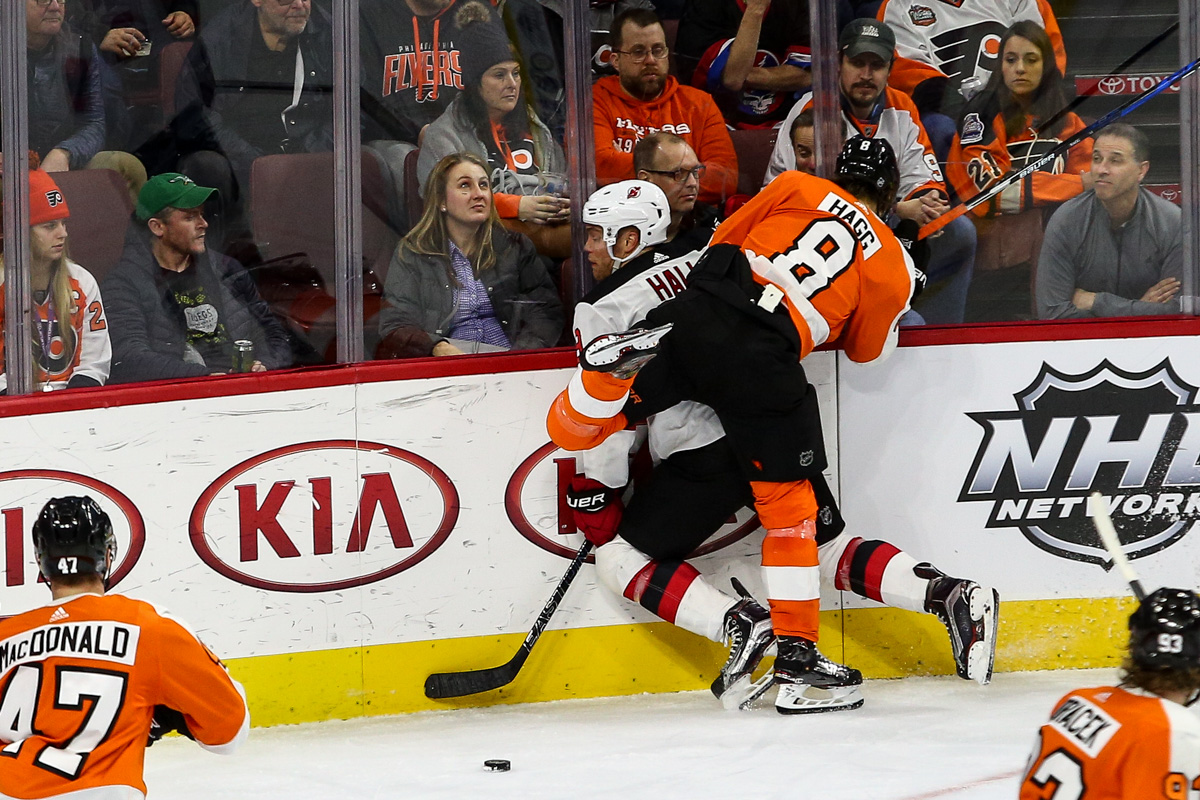 Tuesday night may have been the most dramatic in what has been a concerning stretch for the Devils. Maybe it was the controversial double-minor on Miles Wood and the ensuing clock issues that counted up his already too-long penalty. Or maybe it was five players in red and white sweaters exiting down the tunnel on Tuesday. Perhaps it was the frustration of another shots-advantage not translating in the final score. Whatever the case, it can’t continue.

The club has just one regulation win in its last 11 and are now feeling the injury bug in a big way. Already missing leading scorer, Taylor Hall (hand); penalty-killing wizard, Brian Gibbons (thumb) and backup, Keith Kinkaid (lower body), they were dealt some other issues in Tuesday’s contest. Five of New Jersey’s players made their way down the tunnel–John Moore, Sami Vatanen, Damon Severson, Cory Schneider and Marcus Johansson–the latter two did not return.

Bounces haven’t been going the Devils way, though they have had some help on the out-of-town scoreboard. Columbus has dropped three of their last four; the Rangers have lost three-straight in regulation to fall out of a playoff spot. But, Pittsburgh and Philadelphia don’t figure to stay in the wildcard spots much longer with how well they’ve been playing. Good fortune can only last so long when you haven’t been helping yourself. That’s just reality for New Jersey.

And now, New Jersey will wait. Wait to see if Hall’s hand injury that cost him two games can return him to action in the team’s final game before the All-Star break, which will be a welcomed re-set for the team. They’ll hold their breath on the verdict of Schneider, who surrendered three goals on Tuesday before exiting the game after the second period after suffering a lower-body injury–which appeared to have been sustained while attempting to stop the Patrice Bergeron power-play goal that evened the score. The Brad Marchand elbow to Johansson’s head did not result in a penalty but did result in Johansson missing the remainder of the third period and on a hearing on Wednesday.

Whether it’s the hearing–that could cost Marchand (a repeat offender) some games via suspension or the unofficial rescinded double-minor on Wood, that propelled the Bruins to two goals to take the lead in the second period, it doesn’t change the dire straits the Devils appear to be in. What will change that? Creating some of their own good fortunes. But first, they’ll hope for some good news on the injury front.

A Nod to MacKinnon

Who’s surprised that a former first overall pick from Cole Harbor, N.S., is among the leaders in points? Nathan MacKinnon, the first overall pick in 2013 (that was held in the marathon-draft at the Rock), is flying. He’s got 60 points in 47 games and is on pace to shatter his career-high (78) and possibly reach the 100-point mark. He scored in Tuesday’s 4-2 loss to Montreal. That defeat ended a 10-game win-streak for the Avalanche. Last year’s joke hasn’t been that way this season and no. 29 is a big part of that.

In that 10-game span, MacKinnon collected six multi-point games and combined for 6 goals and 19 points. He also put up points in each of the first nine games of the streak. The Avs never trailed en route to 10-straight, an incredible feat. But so too is the season for the 22-year-old center, who has been around a lot of losing and some turbulence with the Matt Duchene news being constant for the last several seasons.

The only downside is he won’t have much to brag about when he works out with Sidney Crosby over the summer. In the two games between the two clubs, MacKinnon registered one assist while Crosby went without a point. Or maybe that’s all it really takes. I’ll have to ask.

The Professional Hockey Writer’s Association is letting fans cast ballots for the Midseason NHL Awards, they announced on Monday. For the record, I am not a voting member, but I did cast a ballot as a fan. I won’t share it in its entirety (mostly because I did it on my phone and no longer have my initial votes handy). But, I am providing some snippets into who are the favorites in particular awards.

For the first time since the 1960s, the @ThePHWA will have Midseason NHL Awards.

Fan voting will be part of the tabulations for these awards. The deadline is Thursday and winners will be announced Friday: https://t.co/ZQmBNEhOkk

If I could have written Gerard Gallant five times, I would have. And how could you not? He’s guided the expansion-Golden Knights to first in the Western Conference (and a brief tenure as first in the NHL this week). An already patchwork roster, the product of 30 other GM’s doing whatever they could to avoid key players going to Vegas, he’s gotten the most of the group that looks extremely motivated. Maybe what makes him more than just a favorite (I’d say the engraving has already started), is he’s changed the entire conversation. They’re not just a fun story–they’re a legitimate contender for the Stanley Cup. In Year One.

I also offered a vote to Ken Hitchcock. His work with the Dallas Stars has been impressive and I’ll be the first to admit I wasn’t sure this would be a great marriage (even if there was a well-regarded history with the organization).

David Backes, Steven Stamkos and Anze Kopitar will and should receive votes for their performances. The Kings might even have some internal debate between Kopitar and Dustin Brown, as both players are having great, resurgent seasons. But, it’s impossible to ignore the courage of Brian Boyle. Just as he was to begin playing in his first season with the Devils, Boyle was diagnosed with chronic myeloid leukemia. The illness, which he continues to battle while playing, cost him the first 10 games of the regular season. Since returning to the lineup in November, he’s been an important role player to the team. He’s tallied 11 goals and 17 points.

Patrice Bergeron will likely be the favorite when it’s all said and done and this was a particularly hard trophy to navigate five candidates for. I’m only writing about it here because I think it hasn’t been stated enough about how good Flyers’ Sean Couturier has been. He’s already surpassed his career-high in goals and points. This, on top of his defensive game, has been noticeable. He nearly has a 60-40 zone start percentage in favor of his own end, which has made the offensive totals even more impressive.

Calder (Rookie of the year)

Mathew Barzal is just playing out of his mind right now and could carry home hardware if he keeps it up. But that is the question. Arizona’s Clayton Keller and Vancouver’s Brock Boeser have been part of the conversation, too. It’s been a fun year for rookies in the NHL.