Boston, MA — Since 2015, the Northeastern Huskies have made winning hardware in Boston a habit. In 2016, they capped a legendary run to the NCAA Tournament with the program’s first Hockey East Tournament Championship since 1988. Two years later, Adam Gaudette punctuated a Hobey Baker case by scoring a hat trick to beat Boston University for the first Beanpot in thirty years. A year after, with a second Beanpot in hand, Jim Madigan’s squad drew the same two teams they faced in February for the Beanpot. Friday night’s overtime win against BU eerily resembled their opening Beanpot game. Likewise, the Huskies took to the ice on Saturday night against Boston College and mirrored the 2019 Beanpot Championship game to claim their third Conference Title.

BC appeared to have an early jump with a goal 31 seconds into the frame. However, the officials quickly called the goal back after it was redirected in with an Eagle’s hand. Northeastern seized on the chance when Matt Filipe cleaned up a puck in front and staked Northeastern to a lead 2:31 into the game. Brandon Hawkins followed a few minutes later when Joseph Woll failed to catch a shot cleanly. The red-shirt senior from Macomb Township, MI, tracked a puck to the slot, spun, and doubled the lead. The messy BC open continued when Luke McInnis sat for a tripping minor. Hawkins found space in the high slot for a shot and scored his second goal of the night, the eight multi-goal game of his collegiate career.

Jerry York called timeout and the normally collected head coach boiled over, almost begging his team for a better effort for a Hockey East crown. The Eagles benefited from a Jeremy Davies cross-checking minor in the dying second of the frame. The power play carried into the second, and BC capitalized. Oliver Wahlstrom took a David Cotton feed and got his Eagles on the board 18 seconds into the frame. Moments later, Davies took another minor, this one for tripping. David Cotton added to his goal total to make the game 3-2. BC dictated the pace of the frame with an 18-10 advantage on the shot counter, but could not beat Cayden Primeau again.

The game’s tone changed drastically in the opening minute of the third. Logan Hutsko drove across the crease and collided with Jordan Harris. The star Eagle scorer, who previously suffered a neck injury in 2015, fell to the ice and his head hit the ice hard. He lay motionless on the ice as teammates, coaches, opponents, and medical staff came to help him. The Tampa, FL, native, was stretchered off the ice and rushed to Mass General with his father riding. He was able to move his extremities and got a CT-scan. TD Garden quieted. All players and coaches involved were supportive and offered prayers for Hutsko.

When the game resumed, BC out-shot NU 14-5 and kept the offensive pressure on Primeau, trying to force overtime on behalf of their fallen friend. But as he did to Maine and BU, Primeau stopped everything in sight and silenced the Eagles in the dying second to clinch the third Hockey East Championship and second in four seasons. 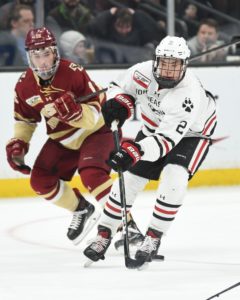 For his efforts, including 38 of 40 successful saves in the championship game, Primeau was awarded the Tournament’s MVP. The sophomore from Voorhees, NJ, recorded 141 saves on 146 shots faced over four games of Hockey East Tournament play, good for a .966 save percentage.

Boston College concludes its season at 14-22-3. The Eagles struggled for much of the season but reminded fans and opponents of their talent and potency. Sadly, they ran out of gas at the final turn.

Jerry York was disappointed after the game concluded. “We spotted them another three-goal lead. It’s a difficult task to come back. But our guys went for it. I thought they rallied, played an extremely solid game. We came within an eyelash of tying it up. I think our team would’ve made noise in the NCAA Tournament.”

Northeastern improves to 27-10-1 and won both the Beanpot and Hockey East Titles for the first time since 1988.

“This doesn’t ever get old,” quipped Jim Madigan. “So happy, pleased and proud of our young men who worked so hard. We started the season with everyone questioning whether or not we were going to have a good team losing, Stevens, Sikura, Gaudette. These young men just worked hard and came to the rink every day trying to get better. For them to go out tonight and compete for a championship, hats off to them.”

The win helps Providence and Brandon Hawkins’ former school, Bowling Green, clinch at-large bids into the NCAA Tournament. Northeastern now awaits their opponent in the NCAA Tournament. They learn their fate on Sunday night at 7 pm with the NCAA Hockey Selection Show airing on ESPNU at 7 pm ET.