Boston, MA — Of the four Beanpot participants, the Northeastern University Huskies are the most snakebit. The Huskies have only won four Beanpot titles and have not hoisted the trophy since 1988. The group suiting up has inspired hope that this might be the year for the 30-year drought to end.

First up, a matchup with the Boston College Eagles. The Huskies took the opening step to the Beanpot behind their star-studded top line and talented freshman goaltender.

The teams traded early blows in the first half of the opening period. Goaltenders Joseph Woll and Cayden Primeau stonewalled the offenses for the early stretch. 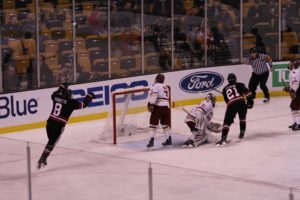 Unfortunately for BC, they gave Northeastern too many chances on the power play. Chris Grando committed a slashing penalty 2:02 into the game, but NU didn’t get a goal.

Near the halfway point of the period, JD Dudek took a tripping penalty and the Huskies took advantage. Dylan Sikura fired a shot from the left circle. The puck bounced off a divet in the ice and an Eagle’s stick before beating Woll for a 1-0 Northeastern lead. The teams traded more shots and skated into the intermission with Northeastern up on the Eagles.

BC controlled the pace of play in the second period, outshooting the Huskies 14-10 in the frame. Freshman goaltender Cayden Primeau controlled the Eagle’s shots and kept his team in the lead. That included two penalty kills and point-blank chances from waves of Eagles.

With time winding down in the period, Northeastern extended their lead when Nolan Stevens put a rebound by Woll. Northeastern carried a 2-0 lead into the second intermission.

The Eagles again controlled the pace of play in the third period, outshooting Northeastern 15-12. And again, Cayden Primeau stopped every shot. He recorded 37 saves in the first Beanpot shutout by a freshman goaltender since Rick DiPietro’s for BU in 2000.

Northeastern rounded out the scoring when Adam Gaudette potted a rebound and gave Northeastern a 3-0 lead. Every member of the top scoring line in the nation got a goal and an assist, and the Huskies shutout the Eagles in their Beanpot opener.

BC Head Coach Jerry York was disappointed after the game, but not lost in the moment. 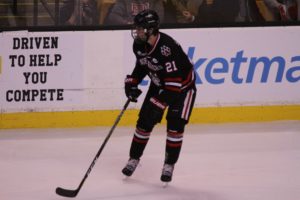 “We accomplished most of our in-game goals. But Northeastern was a touch better than us and we didn’t have enough for them tonight.”

With the loss, BC drops to 13-12-3 overall. The Eagles will return home to face UMass Lowell on Friday night and face Harvard in the Beanpot Consolation game on Monday afternoon. Puck drops at 7 pm at Conte Forum and at 4 pm at TD Garden.

Northeastern Head Coach Jim Madigan was proud of his team after the game.

“We battled tonight. I’m happy for our seniors that we get a chance to play for a championship next week.”

The win improves NU’s record to 16-7-5. The Huskies will host UConn on Friday night and skate for the Beanpot Championship against Boston University on Monday night. Puck drops at 7:30 pm at both Matthews Arena and TD Garden.