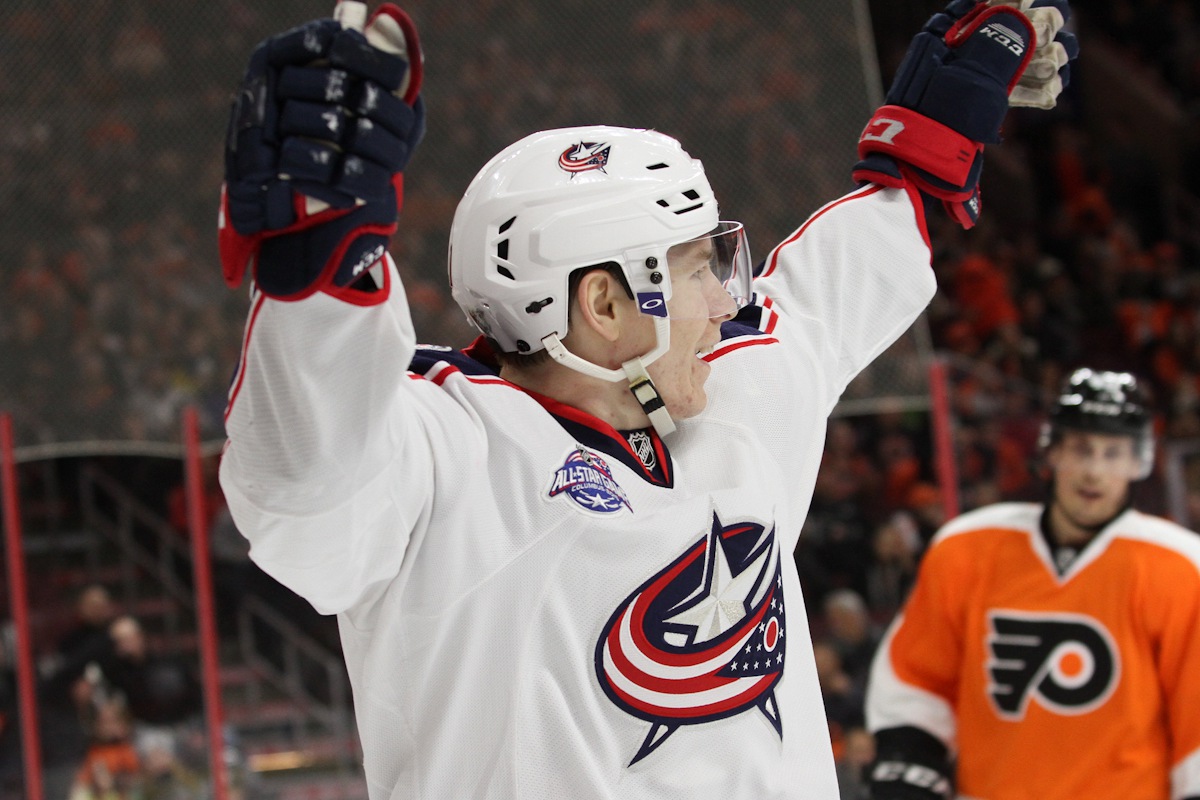 Horton Traded, Wisniewski on the Block: More Surprises on the Way?

Last week, I wrote an article which was a trade primer for the Columbus Blue Jackets. Unbeknownst to myself and every other observer, Blue Jackets General Manager (GM) Jarmo Kekalainen, as he did in 2013, had other, additional ideas in mind to shape the Blue Jackets organization into his vision to not only qualify for the playoffs, but to contend for future Stanley Cup titles. As I did disclose in the article, however, the usually patient Kekalainen is not afraid to be aggressive when the situation warrants.

It began earlier this week with the news that defenseman James Wisniewski was put on the trading block by the Blue Jackets. Wisniewski, who was signed to a 6-year, $33 million contract in July 2011 with then-GM Scott Howson, was recently scratched -benched for reasons not related to an injury – from playing, the first time he’d been scratched as a Blue Jacket.

Blue Jackets Head Coach Todd Richards didn’t offer specifics as to why Wisniewski was benched, but Wisniewski did acknowledge that his game needs to be better.

The Blue Jackets organization asked Wisniewski to provide an approved list of 19 teams that, per the no-trade clause in his contract that he would consider being traded to. A frustrated Wisniewski then responded by providing a list of approved teams which have no salary cap room and no need for offensive defensemen like himself, an attempt to stifle Kekalainen’s attempt to trade him.

The Blue Jackets’ reasons for opting to place Wisniewski on the trading block could have been due to building tension between Richards and Wisniewski, it could have been due to his performance in the 1st Round of the Stanley Cup playoffs, last season when Wisniewski registered a -8 +/- rating, or it could simply be as noted above that Kekalainen and Blue Jackets President of Hockey Operations John Davidson have looked at those parts of the team that they believe won’t be part of their ‘brick by brick’ vision to contend for Stanley Cup titles and Wisniewski is not one of those pieces. Remember, Wisniewski is not one of the players they brought in when they arrived during the 2012-13 season.

And while it may be felt that Wisniewski put the Blue Jackets and Kekalainen is a tough spot, those same supporters may have never thought that Kekalainen may offer in a trade for Wisniewski to take on a part of the contract for the remainder of this season which would be prorated for this season and possibly take on some of next season’s salary while the salary for 2016 drops by $2 million per season to $3 million. So, this perceived constraint may not limit Kekalainen if he’s motivated enough to part with Wisniewski.

The Blue Jackets then pulled off one of the most stunning and somewhat bizarre trades in recent memory by trading away prize 2014 Unrestricted Free Agent (UFA) signee Nathan Horton to the Toronto Maple Leafs in exchange for David Clarkson who had struggled mightily since signing, ironically on the exact same date with the Maple Leafs after a successful tenure with the New Jersey Devils.

Kekalainen was lauded for making the trade as it’s a case of making the best out of an unfortunate situation as Horton, who was signed with the knowledge that he had a pre-existing shoulder injury which required surgery. The Blue Jackets did ‘roll the dice’ by not insuring his contract, thinking that once Horton’s surgery was successful that no additional issues or injuries could occur which for a player with a history of concussion issues like Horton, was somewhat risky.

While Horton did enter the Blue Jackets lineup during the middle of the 2013-14 season, he experienced some issues with injuries during the end of the regular season and did not participate in the Blue Jackets 1st Round Stanley Cup playoff series with the Pittsburgh Penguins. Horton performed well considering that he had been idle for such an extended period of time and perhaps in his haste to join his teammates, had ‘hit the wall’ as to conditioning and being in ‘game shape’.

What transpired afterwards in the off-season caught everyone by surprise: rather than any shoulder or concussion issues, Horton, during his off-season training, experienced severe back issues to the point of being debilitated by it and making any chances of ever playing hockey again remote, at best.

Kekalainen initiated the discussions with the Maple Leafs and, once they agreed upon the specific trade details, made the trade for Clarkson.

For the Blue Jackets, Clarkson, who has a nearly similar annual salary and an identical term, provides a gritty, north-south, in-your-face style of play that fits perfectly with the current Blue Jackets team and, above all, provides an investment in a player that can contribute rather than pay a lucrative salary to a player who will probably never play again. Clarkson may never replicate his breakout season in which he scored 30 goals, but scoring in the 17-20 goal range would be acceptable something that hockey-fanatical Toronto fans never would.

For the Maple Leafs, while the odds are remote that Horton will ever play again, if Horton does recover, they obtain a very good player who can help their organizational rebuild. More likely, however, trading for Horton, who the Leafs will place on the Long-Term Injured Reserve (LTIR) list thus allowing the Maple Leafs salary cap relief, something the usually capped-strapped Maple Leafs could use.

Given these two stunning developments, with two additional injuries to key Blue Jackets players this week, Brandon Dubinsky and Matt Calvert, bringing their league-leading ‘man games lost’ to seven starting players on the Injured Reserve (IR) list to seven and being in the midst of a five-game losing streak and their bleak playoffs chances all but eliminated, the Blue Jackets may have gone from making slight changes to their overall organization to the role of ‘sellers’ prior to the National Hockey League’s (NHL’s) trade deadline, scheduled for tomorrow, March 2nd at 3 P.M. Eastern Standard Time (EST).

In addition to the list of players provided in my previous article, with Calvert being removed from the list due to being out indefinitely with a concussion and given the possibility of now trading Wisniewski prior to the deadline, the following players may now be added to the list of tradable players:

No matter what transpires between now and tomorrow at 3 P.M., this week’s events have changed the dynamics of what may be expected of the Blue Jackets at the trade deadline.