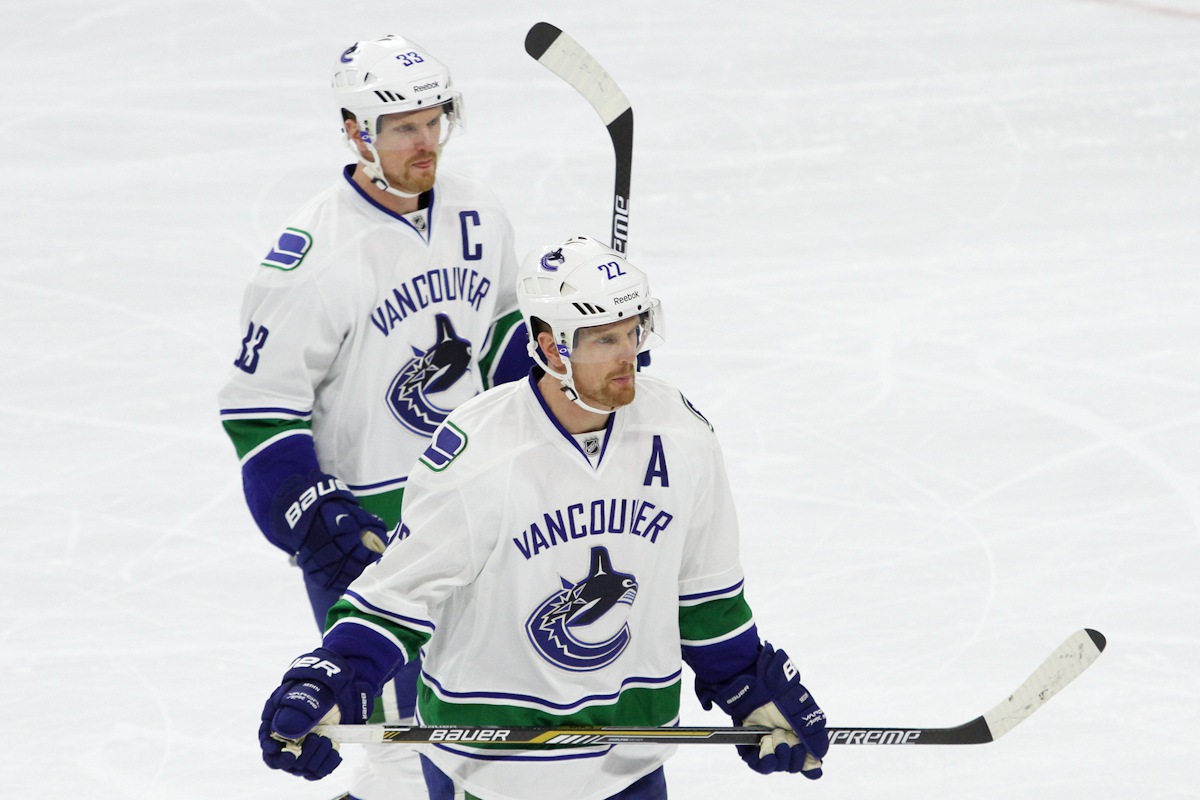 “Hello, LA Kings? Remember that goal you scored on Thursday by banking it off a Toronto defenseman’s head? We’re taking it back.”

That must have been what happened for the Canucks to jump out to a 2-0 lead versus LA on Saturday night. The second goal saw Henrik Sedin come down the slot with a guy in the box for each team and just throw the puck forward. It hit off Doughty’s stick as he slid, may have touched his body, and blooped up over Ben Bishop before he could get into position to knock it away.

Both Bishop and Doughty hung their heads, and Doughty gave some fans behind the net a mighty fright by banging his stick off the glass.

The first goal had been more worthy, but came on a mistake by Bishop to kick the puck way out into the slot on a toe save. It had come from a backhand shot by Loui Eriksson, harmless from the boards. The puck went straight out into the high slot for Sven Baertschi, who shot it into the wide open side of the net. Baertschi almost had another directly after when he crashed the net on a play soon after, redirecting a puck just wide. He was stuffed entirely into the net for his trouble.

The Kings outshot the Canucks by a pair in period one, and the play was more LA’s than the other way around. But other than an early play when Lewis put the puck to the slot off the wall with Brown there for the shot, the Kings were not dangerous.

The difference in their lineup, Jarome Iginla, wasn’t making much of a difference. Would you think he might? Analytics, which I heard cited on the NHL radio station on satellite radio the other day, apparently say he’s on a major decline. Media in LA mentioned the old saw, “catching lightning in a bottle” and added, “one more time,” in their assessment of what he might offer.

He’s certainly getting his chances. He was playing on a line with Kopitar and Gaborik. That’s two of the elite scorers in the history of the game, though entirely cold right now. Each has seven goals on the season (coming into the night–Kopitar would leave it with eight). And hey, what am I saying? Iginla has 619 career goals. The other two added up have just 24 more goals in more than 250 more games. In other words, who’s the elite scorer here? Or should that question be posed in past tense, at least when it comes to Iginla?

But whatever lack of production exists isn’t his fault. You could start to dissect LA’s goal-scoring trouble by looking at the power play, where the following is apparently a favored strategy: Rush the blueline, then wait. See, you throw the puck back to Doughty, who approaches said blueline with it, and some speed. But when he gets there, he stops short. So does everybody else. He then turns around and puts it back to Kopitar, who is the only one still moving on the play. That player then reaches the blueline and throws the puck into the corner, where nobody can retrieve it, since they’re standing on the blueline. Yeah, it’s dumb. No, I don’t know why they do it. It’s my job to report what I see, and someone else’s to make sense of it.

No wonder they’re sitting 21st in the league on the PP. Note, of course, that they’re fourth in the PK department—naturally, since defense is their thing.

The team’s number of goals is woeful. 158 coming into the night put the Kings ahead of only three teams in the West. And guess what? Vancouver closed the gap with their eventual 4-3 win. They now are at 150 for and 183 against. The Kings have 161 for and 164 against.

In fact, the LA team is ahead of only three teams in the East in goals scored, and those three in the West. And all of those squads are ones that you’d laugh at if someone said, “Did you get your playoff tickets yet?” Add that to the fact that they’re in negative territory in the GF-GA stat, and you’ve got the recipe for an early end to the season.

Period two produced a couple of very exciting plays early on. Kempe stole a puck practically right in front of the Vancouver net shorthanded, and stickhandled it across the front of the crease. He couldn’t stuff it.

The next one was Carter. Man, the speed. He grabbed a pass in full flight and burst into the zone, approaching the net with Miller shading toward his left. Carter took it in close and probably had the goalie frozen and should have deked around him. Miller was far enough out of the net to have left room to go around him. But Carter shot. Good choice, too, and he forced the goalie into a good save with the glove.

The aforementioned Iginla showed his stuff about mid-period. He crashed the net, took a couple of whacks and hung in there, and eventually saw the puck catch up with him. He turned and slammed the rebound at the keeper, who made yet another save. Ryan Miller was good, and had faced about 20 shots to that point. He would eventually be named the game’s second star, after Horvat.

But the Kings also allowed a couple of goals in P2.

The first of the frame (third overall) was another one that the hockey gods had to be responsible for. Bo Horvat tried a stuff coming out of the corner. Nic Dowd, doing that right thing, came back hard to cover the mess in front of the net. As he did, the puck came to him, hit his skate, and went straight back into the cage.

The second of the period was just poor defensive play. The Canucks flipped a puck out of their own zone and past Forbert, who chased Nikolay Goldobin down the ice as the distance between them increased. Goldobin put the puck straight past Bishop to the goalie’s blocker side. People on twitter blamed the goalie. (See why twitter is for dummies, and the president?)

And, before it ended, they had scored. And on the power play, no less. Why? They didn’t use that useless play described above. They got in the zone, moved the puck around, and shot it. Simple formula, and Kopitar made a masterful shot.

The puck had come across and umbrella-shaped path from right to left in the Vancouver zone. First Doughty had it, then Martinez. He sent it to Kopitar practically at the left circle. He then lofted it up and over the goalie’s shoulder. And what had just occurred to me half a minute before when Kopitar had had the puck in the space close in the slot and elected to pass was, “Come on, friend. Man up and shoot the freaking thing at the net. You might actually score.”

With that goal energizing them (as well as, let’s be honest, the threat of a yelling out in the dressing room), the Kings pressed to the end of the period. In fact, with just 20 seconds left, Toffoli and Pearson created a chance. Then Doughty came flying down the slot and to the right of the net, getting off a wicked slapshot. Miller was equal to that, too.

Frame three. What would you expect but energy from this team which starts game after game oh, so slowly. (They had been down 2-0 versus Toronto Thursday before ending up with a 3-2 shootout victory.)

And indeed, they had it. The Kings slowly pushed Vancouver back, three different times taking their goalie out for an extra forward as the last three minutes passed. They scored at around 12 minutes gone, then got another with 1:21 left and that goalie out.

Vancouver helped, taking four minors in the period, to LA’s one. The second goal was on the PP. So that’s going to change the stats discussed above. But after the two tallies, the Kings could do no more, though they had two chances with 18.4 and 5.8 seconds left after Vancouver iced the puck.

So some conclusions. The Kings need to keep doing what they’re doing shots-wise. But they need to invest their skilled players with a clearer license to shoot even when the result could be a rush the other way. All this conservatism is killing them. And they might do some work on that PP to get it up at least to midway in the league. But their real need? To show up at the start of the game, and not play from behind, which they’re just not that good at doing.

After the game, Coach Sutter said little, because the press asked little. But he did comment that the slow start was marked by turnovers and odd man rushes, “pucks in the net.” He said he was happy with Kempe’s speed. And he said that his biggest disappointment was “our top guys didn’t have a very good night.”

The Kings now wait until Thursday to play Nashville. The standings? They show the LA team in the last West Wildcard spot, but look out–St. Louis is right behind with two games in hand.