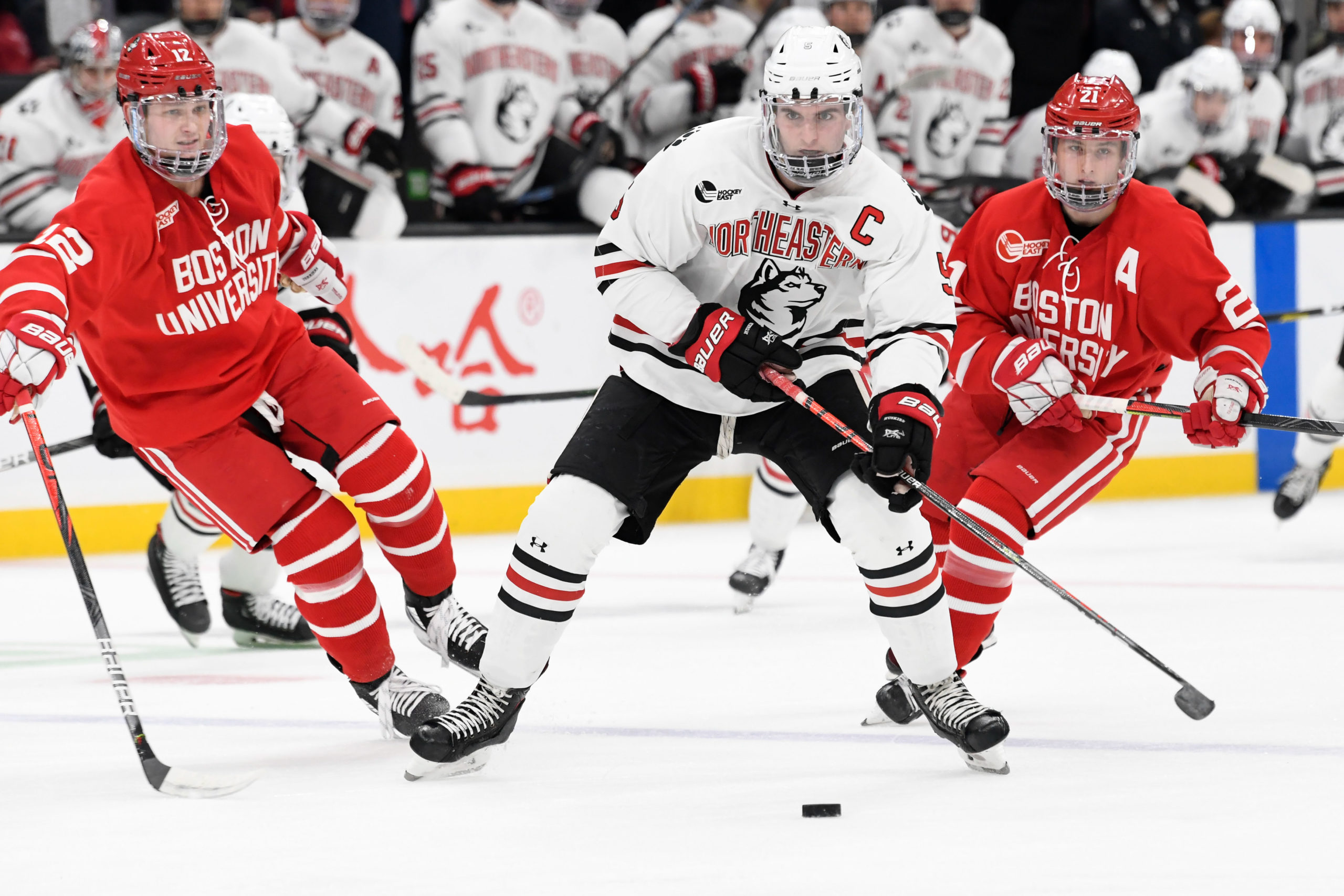 The Hockey East Association has announced the pairings for the best-of-three quarterfinal round of the 2020 Hockey East men’s championship tournament. Playoff games begin Friday (March 13.)

Hockey East regular-season champion and No. 1 Boston College (24-8-2/17-6-1 HEA) will play host to No. 8 Providence (16-12-6/10-11-3 HEA.) The Eagles claimed the 17th regular season title in program history in 2019-20 and enter the postseason unbeaten in their last nine outings while outscoring opponents 44-15 in that span. The Eagles and Friars crossed paths twice this regular season on Oct. 25 and Nov. 2, with each team taking a road win. The quarterfinal clash is a rematch of last year’s tournament series at Schneider Arena that saw the seventh-seeded Eagles advance all the way to the title game at TD Garden. Boston College is 9-4 in eight total postseason meetings against Providence.

No. 2 Massachusetts (21-11-2/14-8-2 HEA) welcomes No. 7 Northeastern (18-13-3/11-12-1 HEA) to the Mullins Center beginning Friday. The Minutemen claim the second seed for the first time in program history just one year after winning their first-ever regular season crown in 2018-19. UMass had never before finished in the top four of the Hockey East standings in back-to-back years. The Huskies own a 4-1 postseason record over Massachusetts in two prior quarterfinal match ups, most recently in 2018. In three regular season clashes, UMass took a 2-1-0 mark against Northeastern, including a weekend sweep of a home-and-home set on Nov. 1-2. The Huskies earned a 3-1 win over the Minutemen on Oct. 15 at Matthews Arena.

No. 3 UMass Lowell (18-10-6/12-7-5 HEA) will entertain No. 6 Boston University (13-13-8/10-9-5 HEA) at the Tsongas Center in the quarterfinals for the second straight year, as the River Hawks look to return to the semifinals at TD Garden for the first time since 2017. A year ago, Boston University won the series, two games to one, to win its first road quarterfinal series since 2004. The Terriers have battled UMass Lowell in 10 previous postseason series and carry an 11-6 mark in those 17 contests, including a 3-1 mark in four Hockey East title game clashes and two wins in consolation games in 1985 and 1996.

No. 4 Maine (18-11-5/12-9-3 HEA) draws No. 5 UConn (15-15-4/12-10-2 HEA) to Alfond Arena to host a quarterfinal series for the first time since 2012, when the Black Bears last appeared at the TD Garden with a runner-up finish. The Huskies took two of three from Maine during the regular season, including handing the Black Bears their only home loss of the year, 3-2, on Feb. 14. The following night, the Black Bears earned a 1-0 win with less than a minute left in overtime. UConn tied its best-ever finish in the Hockey East standings after missing the playoffs in 2018-19 as the Huskies are looking for its first win in the Hockey East postseason. This series will mark the first tournament meetings between the two programs. The Huskies hold a 7-5-4 lead in the all-time series with Maine, as seven of those 16 games required overtime, and hold a 7-3-3 mark against the Black Bears since becoming a member of Hockey East in 2014-15.