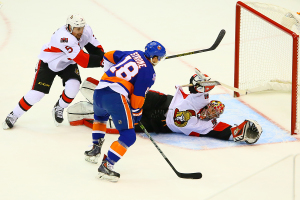 Thomas Hickey scored at 3:06 of overtime to give the New York Islanders a 3-2 win over the Ottawa Senators Tuesday night at the Nassau Coliseum. Neither team played a particularly pretty game, but the Islanders managed to gut it out and earn the two points.

Brock Nelson and Ryan Strome also scored for the Islanders while Mike Hoffman and Clarke MacArthur tallied for the Senators.

Jaroslav Halak made 16 saves to earn the win for the Isles. It was his 10th straight victory, tying a franchise record set by Hall of Famer Billy Smith back in 1982.

The winning goal came after Hickey circled the net and backhanded the puck towards the crease. It hit off a skate in front and went behind Craig Anderson to end the game.

“I just came around the net, there’s bodies going to the net and I just threw it blind to be honest,” Hickey said. “It must 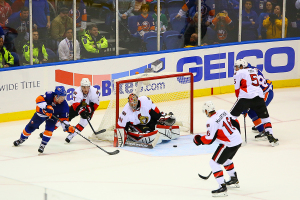 have bounced off of something. We talk about doing that. That’s how some goals get scored.”

Islanders coach Jack Capuano was happy to see Hickey get the game-winner. ” He [Hickey] played well all night and he got rewarded for it. He kept his feet moving and he

used the back of the net.”

Both teams had plenty of passes that just missed the mark and too many turnovers. The game was far from artistic to watch, but the Islanders won it anyway, despite not playing their best hockey.

The Senators got on the board first on a bullet of a shot by Hoffman from just inside the blue line at 10:04 of the opening period. Halak had little time to react.

The Islanders evened the score on a goal by Nelson with just 1:34 left in the second period. The goal was set up by a turnover inside the Senators zone and Nelson took full advantage. Kyle Okposo intercepted the pass and fed Nelson to set up the goal. 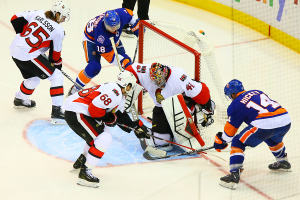 The Isles almost took a 2-1 lead just before the second intermission when Casey Cizikas beat Anderson on a hard shot just before the buzzer went off. However, replays showed the puck crossed the line just after time expired and after a review from “The War Room” in Toronto, the goal did not count.

The third period started with both teams skating four-on-four and the Islanders took advantage of the open ice. Hickey shot the puck along the goal line and behind Anderson and Strome was able to push it over the line for the goal just 1:07 into the final period.

A pretty pass by Mark Stone to MacArthur set up the tying goal at 11:14 of the final period. MacArthur was left uncovered down low and beat Halak to even the score and force overtime.

That set up Hickey’s heroics and another two points in the standings for the Islanders, who are now 18-7-0 on the season including a 10-2-0 mark at the Nassau Coliseum. 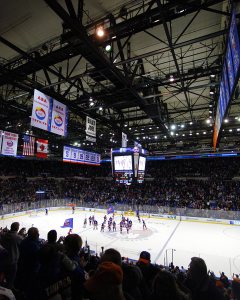 The Islanders were very confident after the game and were pleased they earned the two points in the standings despite not playing their best hockey. “I think we did enough good things to win the game,” Strome said. “That’s what good teams do, they find a way. We’ve done that a little bit this year.”

“We didn’t play our best tonight, but we gave up 18 shots, that’s pretty good defense,” Okposo added. “They had some zone time on us but thought we did a pretty good job of defensive zone coverage and a pretty good job blocking shots tonight. That’s the sign of a good team, you don’t play your best but you give up only 18 shots and get two points. We’ll take that any day.”

The Islanders limited Ottawa to 18 shots despite being without defensemen Johnny Boychuk and Lubomir Visnovsky. Both of them are still considered day-t0-day with nagging injuries. Brian Strait and Matt Donovan again stepped in and played well.

Travis Hamonic left the game early with an upper-body injury and winger Cal Clutterbuck left with a lower-body injury. Both will be re-evaluated tomorrow and are considered day-to-day.

The Islanders return to action Thursday night in Ottawa to finish their home-and-home series with the Senators. Game time is 7:30 pm.

Cory Conacher was a healthy scratch for the Islanders while the Senators scratched Bobby Ryan, Colin Greening and Patrick Wierioch.