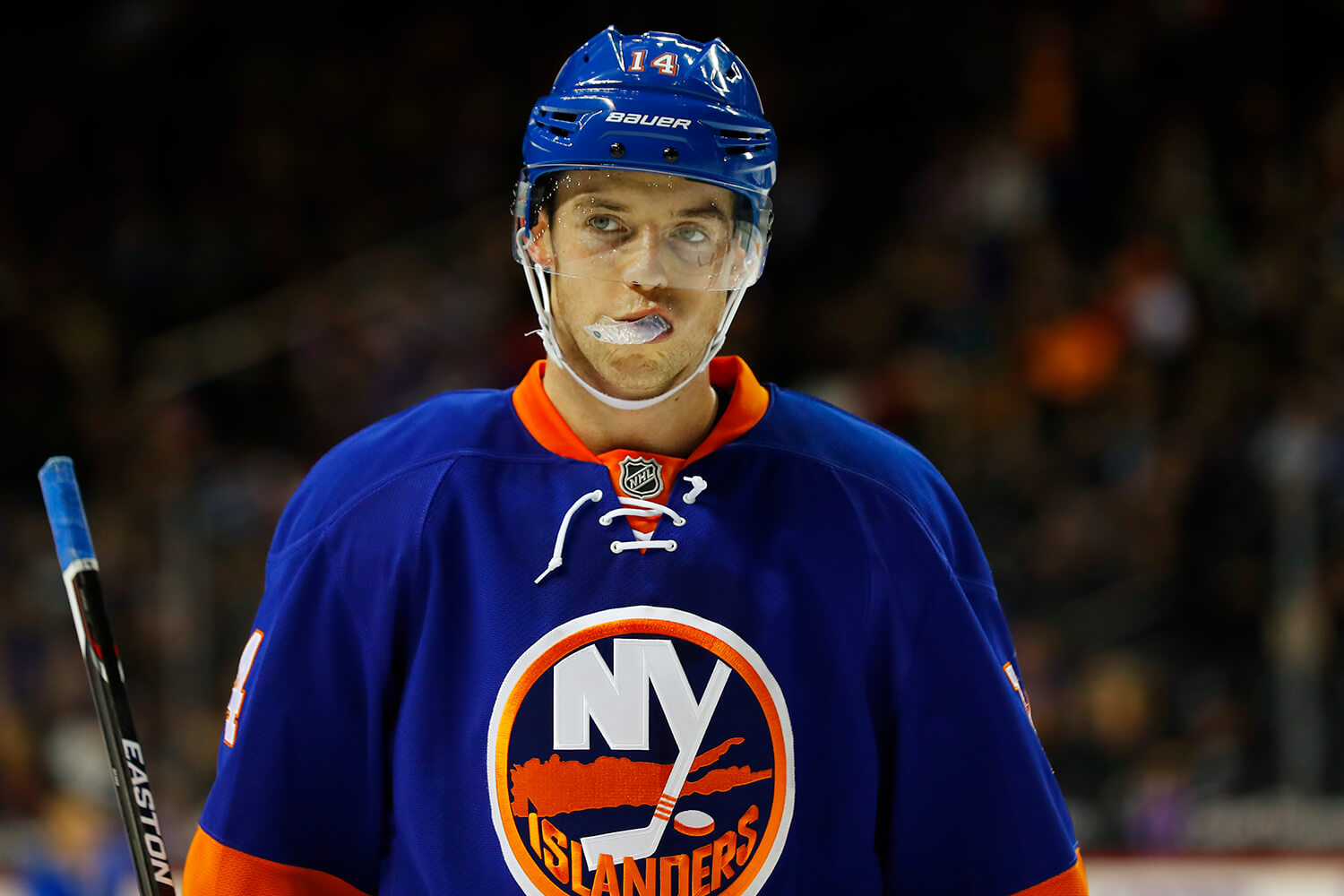 Thomas Hickey scored at 1:53 of overtime as the New York Islanders escaped with a much-needed 2-1 win over the Calgary Flames at Barclays Center Monday night. Thomas Greiss made 25 saves to earn the victory while John Tavares added a goal and an assist for the Isles. Sean Monahan scored the lone goal for the Flames.

The game was far from pretty but for an Islanders team that has gone just 1-4-2 in their last seven contests, any win was a satisfying one.

“I’m just glad the effort the guys put in they got rewarded,” said Isles coach Jack Capuano. “At the end of the day we got down to five defenseman and the guys at the back end played hard.”

The Islanders came out strong in the first period and controlled the tempo early. They outshot Calgary 9-4 in the opening 20 minutes and had several quality scoring chances on Flames goalie Brian Elliott who looked shaky in the early going.

Tavares gave the home team an early 1-0 lead when he took a pretty pass from Josh Bailey and beat Elliott for his sixth goal of the season.

“I just tried to sucker the guys in,” Bailey said. “I wasn’t 100 percent sure Johnny [Tavares] was there but he was and he did the rest.”

It was the captain’s first goal since November 3rd against Philadelphia, a dry spell of nine games.

“It was about time,” the captain admitted. “I’ve had some chances. I’m counted on the produce. I almost had too much time. I was able to read the goalie and pick the corner. I’ll try to build on it. I put a lot of expectations on myself.”

Both teams struggled in an uneven second period that had little tempo or flow. The Flames outshot the Islanders 11-10, but neither team looked particularly sharp.

The Islanders also lost defenseman Adam Pelech to an upper-body injury in the second period and the rookie did not return. The injury did not seem to be very serious although coach Jack Capuano indicated Pelech will be re-evaluated Tuesday by the team’s medical staff. The Isles had to finish the game with five defensemen.

Unfortunately, the Islanders found themselves in the familiar position of protecting a one-goal lead in the third period. The Flames came out quickly in the final 20 minutes and quickly had the home team back on their heels.

Some good saves by Greiss preserved the Isles lead early on before Monahan beat Greiss up high to the stick side when he was left unattended near the faceoff circle to tie the game at 1-1 at 5:51.

Calgary outshot the Islanders 11-6 in the third stanza but Greiss kept his cool and kept the Flames off the board the rest of the way to force overtime.

In the extra period, the Isles finally got a break when one Calgary player broke his stick during three-on-three overtime. That gave the Islanders a de facto man advantage and a lot of open ice. Tavares held the puck, drew some defensemen to him and then passed to Hickey who turned and deflected it past Elliott for the game winner.

“Unfortunately for them they had a broken stick,” Hickey said. “We’ve been looking for a bounce and complaining we didn’t get one so to get a broken stick in overtime, that’s lucky for us. Prince did a good job to hold on to it and then John [Tavares] obviously knew what was going on and he just waited for two guys to come to him. I got a stick on it and it went in.”

Hickey has proven to be a clutch goal scorer. He has 16 career goals (15 regular season and one postseason) but five of them have been overtime winners including a memorable one in last year’s playoffs against the Florida Panthers.

The win gives the Islanders a boost as they head to tough back-to-back games against division foes. Wednesday, the Isles host the defending Stanley Cup-champions at Barclays while Thursday night they travel to Washington to take on Alexander Ovechkin and the Capitals.
NOTES:

The Islanders scratched Ryan Strome and Scott Mayfield. J.F. Berube served as the backup goalie while Jaroslav Halak was given the night off.

The Islanders dominated in the faceoff circle, winning 38 while losing just 21 draws on the night. Alan Quine was 8-1 to lead the team while Casey Cizikas (11-6) and John Tavares (15-9) both had strong games.