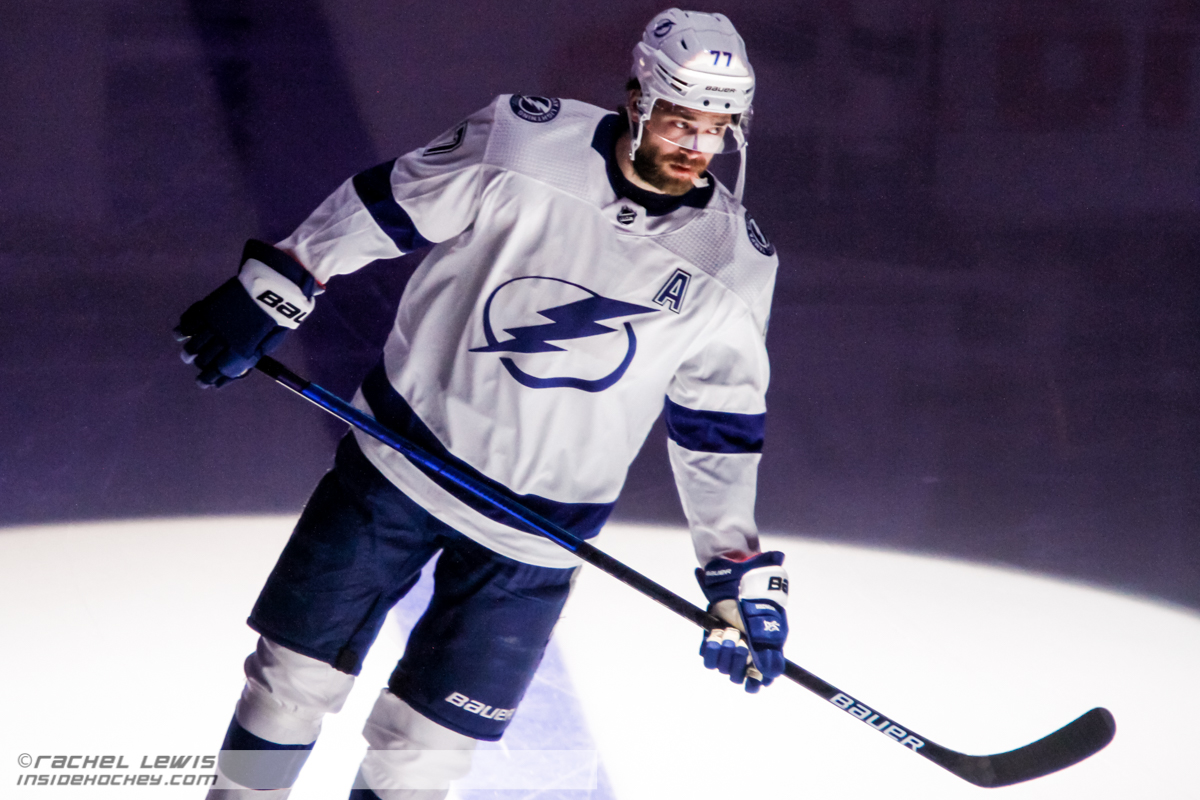 TAMPA – Thursday’s 4-2 Tampa Bay Lightning win over the St. Louis Blues had a roller coaster effect with all the momentum changes as it was extra competitive after the Blues had won a 4-3 overtime outing just two nights earlier at Enterprise Center in St. Louis.

Blues forward Pavel Buchnevich scored on a power play goal at 7:16 in the third period to tie the game at 2-2. In St. Louis two night’s earlier, Eric Cernak had scored off the opening face-off for the Lightning as Tampa Bay took a 3-0 lead after one period.

Just after Buchnevich connected, Lightning defenseman Victor Hedman would have none of another Blues rally for a win. He skated to the slot left to right and wound up with a slap shot that rocketed by Blues goalie Ville Husso for a 3-2 Lightning lead at 8:09.

Hedman was hit with a high-sticking penalty just before his goal which put St. Louis on the power play.

“Not sure he was completely happy with his game for the last few games and for him to break out and put a stamp on it was big,” said coach Jon Cooper. “It clearly wasn’t a penalty. The game happens fast and then they made the call.”

Hedman came in with no goals and three assists in his last five games. He was looking to be aggressive and assertive, especially as Nikita Kucherov and Brayden Point are out long term with injuries.

“Five-on-five, we were playing well,” noted Hedman. “We got back to our habits of playing smart hockey and and that’s the same way we have to approach this road trip. It’s the longest one of the year.”

Hedman sealed the deal at 10:29 when Pat Maroon dug the puck off the right board and slid it to an uncovered Hedman on the left side of the crease. He deeked Husso to the inside and then slid it through the 5-hole for the 4-2 margin.

“When you play 25 minutes per night and play a demanding position and in demanding spots, there has been some situations where we depend on his and most of the time he comes through,” said Cooper. “You create an aura about yourself and you work your tail off and usually good things happen.”

Hedman assisted Anthony Cirelli earlier in the third period as he scored on the power plat ay 4:26 for a 2-1 Tampa Bay lead.

“It’s tough on those guys who are marquee players and you hear your name for the Norris Trophy, it can be a little bit of pressure,” said Cooper. “Sometimes you hold yourself to a standard that can be a little too high. It’s okay to make mistakes and we all make them.”

Hedman referenced the Lightning’s impending five-game journey which includes stops in Boston and Philadelphia over the weekend before three in Canada at Montreal, Toronto and Ottawa next week.