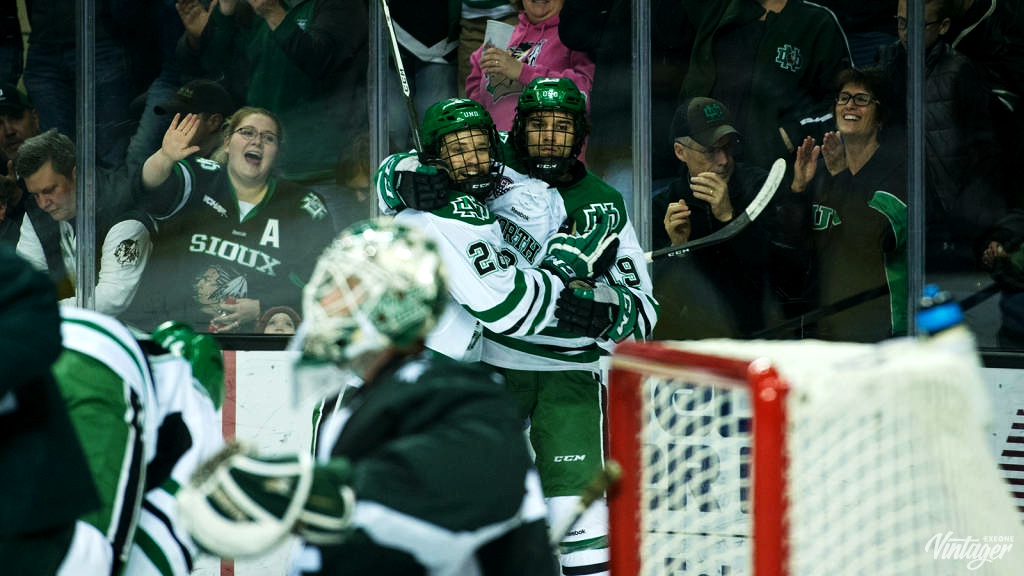 Grand Forks, ND – What a difference a weekend makes. Last weekend, the University of North Dakota Hockey team had everything going their way. They entered this weekend’s series with high expectations and were looking to extend their two-game winning streak.  During the first two periods of play, the Fighting Hawks looked like the team that was 3-6-0.

Things didn’t start out that bad for the Hawks. At the 06:56 mark of the first period, the Hawks got on the board with a power-play goal from sophomore forward Shane Gersich. That lead didn’t last long.

Less than four minutes later, the Michigan State Spartans went to work and scored on their first shot of the game. Even more frustrating for the home team, the Spartans scored two goals on the first three shots that they put on net. Not the start the Fighting Hawks wanted.

“I thought we came out for the first part and had a pretty good start,” head coach Brad Berry said. “Then the momentum got away from us for a couple of different reasons. The lack of execution and talking penalties giving them momentum. It’s one of those things where you’ve got to sustain momentum for 60 minutes to win a game.”

Hockey is a game of inches and that’s how close UND was to tying the game in the second period. In what could be described as a defining moment, sophomore forward Rhett Gardner missed a wide-open net and a golden opportunity in the blue paint to tie the game at 2-2. Gardner doesn’t usually miss from there.

Here’s Gardner’s take on the play, “I saw a whole net and rolled up on the heel of my stick and went a little bit right.”

The Spartans pushed the lead to 4-1 and it didn’t look good for the home team. Kudo’s to Spartans freshman defenseman Jerad Rosburg, who had a career night as he scored two goals and added an assist in the winning effort.

The Hawks would push back in the third period and get two goals from freshman forward Tyson Jost who scored two quick goals 31 seconds to make the score 4-3 MSU. That’s all the closer the Hawks would get. UND would suffer its second straight loss on home ice.

When you look back at tonight’s game, the Hawks played about 11 minutes of great hockey. They also looked rattled at times.

“I think we were getting pucks deep,” coach Berry said. “We were making better decisions with the puck – not turning over the puck and giving ourselves a chance to play in their end of the rink. There was an urgency there. We got a goal on the four-on-four. Then we got one shortly after that got us going. Again, you can’t get to that point, you have to build the urgency earlier in the game.”

UND captain Gage Ausmus agreed with his coach’s analysis and thought maybe the Hawks looked past the Spartans.

“We didn’t come with the right mindset,” Ausmus said.  “We kind of looked past them and that’s the thing with a young team, any team. In college, any team can you beat you no matter what their record is. I think we kind of came into this game not focused and prepared for what they had to bring.

“Obviously, we have to come with a different mindset. I think that’s pretty easy with our group. Last weekend, we played in St. Cloud, we put together two 60-minutes games and that’s what we need to do to win game with the group we have this year. We need to play the first, second, and third periods. I think we only put together one good period tonight. Obviously, tomorrow we need to realized we need to bring it from the start.”