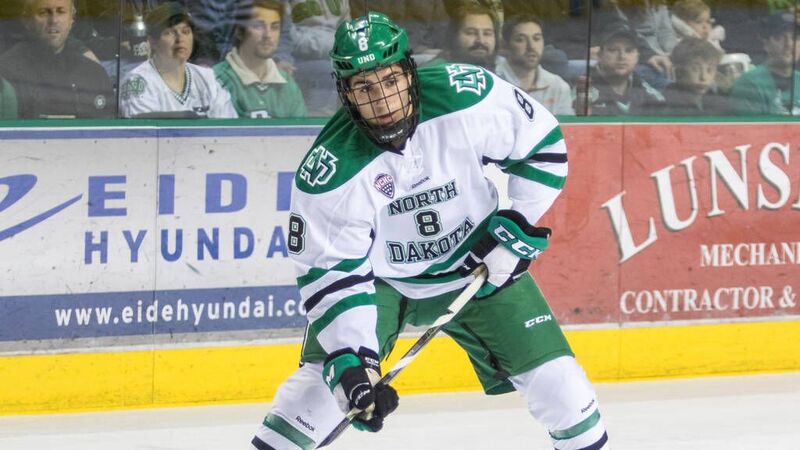 Grand Forks, ND – Over the course of the past three seasons, the University of North Dakota Fighting Hawks hockey and the Colorado College Tigers have played a lot of hockey against each other.

During the past three seasons, the Tigers and Fighting Hawks have played 15 times. UND holds the series edge 13-1-1. The Tigers are winless in the last 10 games against the Hawks (0-9-1).

Since the inception of the National Collegiate Hockey Conference, the Tigers have spent their spring breaks in Grand Forks. For the third season in a row, the Tigers traveled east to take on the Green and White in the first round of the NCHC playoffs.

During the past two seasons, UND has ended the Tigers season in the first round of the NCHC playoffs. This season, history seems destined to repeat itself, again.

“Number one, if you have the first game and the other team doesn’t, that means that they are down in the series,” head coach Brad Berry said. “It’s the best of three and that means that they have to win in order to prolong their season. The toughest thing to do is to close a team out. Again, were at that time of year where there’s urgency on both sides.”

Entering game on of the series, the Fighting Hawks held a 3-0-1 series record against Tigers. UND looked to improve on that record and they would.

Tonight, the game was pretty one-sided on the ice, but the Tigers freshman goaltender Jacob Nehama kept the Tigers in the game. The score was only 3-1 after two periods of play. Then in the third period, Hawks blew open the game scoring four goals.

Below is another highlight-reel goal from Nick Schmaltz.

WATCH: Schmaltz scores his 2nd of the game on the PP to put UND up 5-1 in the 3rd period. https://t.co/H7ytdCB6wC pic.twitter.com/llunPVc4XR

The story of the night was the continued stellar play of the freshman class. Three for UND’s seven goals were scored by freshmen. Freshman defenseman Hayden Shaw scored the first goal of his college career. After the game, the young defenseman was smiling from ear-to-ear.

“It’s pretty fun,” Shaw said. “The guys were really pumped for me.”

Coach Berry was pleased with the contributions of his freshmen class. Over the last couple of games, they’ve stepped up their contribution on the score sheet.

With the win, UND remains at number one in the Pairwise Rankings.

The freshman phenom Boeser continued his torrid pace. With two assists has scored (20g-25a—45pts). In the last six games, Boeser has scored (6g-6a—12pts).

UND sophomore goalie Cam Johnson stopped 15-of-16 shots and with the win improves to (19-3-1, 1.GAA, .937 save percentage). Johnson is ranked second in goals against average and third in save percentage.

On Saturday, UND will try to close out the series against the Tigers; game time is 07:07 pm CT.