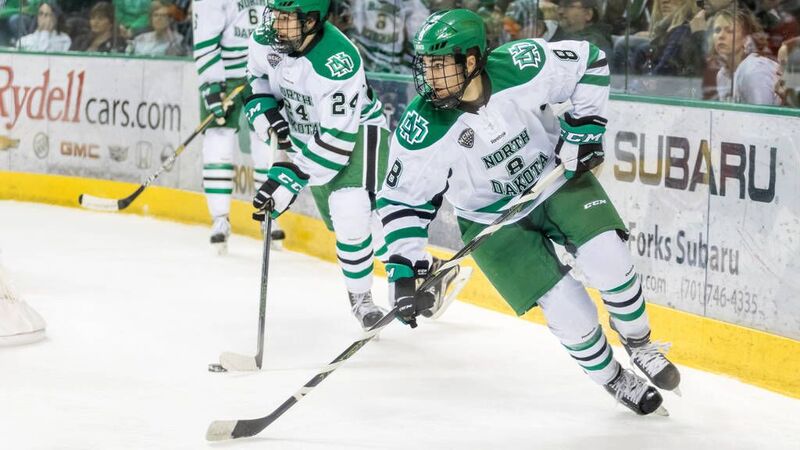 Minneapolis, MN – Entering today’s third-place game, the University of North Dakota Fighting Hawks had a 1-4 (.250) record in the National Collegiate Hockey Conference’s Frozen Faceoff. The Fighting Hawks looked to improve on that horrid record. But it wasn’t meant to be.

After tying the Denver Pioneers 1-1, UND will have to wait to improve on that Frozen Faceoff record that now stands at 1-4-1.

At first, the prospects of UND improving on their record looked promising. UND would strike first with a goal at the 6:09 mark of the first period. Nick Schmaltz would take a pass from Drake Caggiula in front of the DU net and shoot the puck past Pioneers goalie Evan Cowley. That lead would hold until the 13:21 mark of the third period when Danton Heinen would take a pass from Trevor Moore and deposit it behind UND sophomore goalie Cam Johnson. Unfortunately, that would be all of the scorings the rest of the way.

“I thought we just had a good shift cycling and being close to pucks and supporting each other,” Schmaltz said. “Just kind of following the net, Drake (Caggiula) made a good play. Lucky it snuck in so it was a good play.”

Over the past five games, UND sophomore forward Nick Schmaltz has been on a torrid pace scoring (6g-6a—12pts). Today, Schmaltz added to that total with this goal.

“It was a battle,” Berry said. “I am proud of the way our guys persevered in battle. They battled right the way to the end. It’s unfortunate that our guys didn’t get the extra point for the win. I thought our guys battled really hard tonight.”

For the most part, UND played much better on Saturday and carried most of the play until the Pioneers would push back in the third period to tie the game.

To Play or Not to Play

As of today, both teams were already in the NCAA tourney and really didn’t need to play in third place game. Both teams rested many key players that were banged up.

For now, head coach Jim Montgomery is in favor of keeping the third place game.

“I think it’s important for us to build our brand and our league, and for us to be able to sell tickets first of all,” Montgomery said. “For us to be able to… a lot of people think there’s nothing in the consolation game. Our players are used to playing back-to-back games. So when we go to the NCAAs, we have to be in that kind of condition. If you get out of that rhythm it does affect your body physically.”

At times, it’s tough for the players to get up for a third place game. Especially, when  both teams are already in the NCAA tourney.

“Regardless of the situation, you’ve just got to show up and play the game,” Caggiula said.  “You don’t look it as it doesn’t mean anything. It has an effect on the Pairwise (Rankings) and it has an effect on your momentum heading into the national tournament. It doesn’t really matter what the circumstances is, you just go out there and play like it’s any other game.

“It shouldn’t affect you, but it’s tough. Like coach Berry said, it’s a third place game and both teams are in the tournament.  It’s a tough situation.”

“Whenever you put the North Dakota jersey on you go to battle and our guys did tonight. It doesn’t matter if it’s the third place game or a first-place game,” Berry said. “Our guys put their hearts on the line tonight.”

Next weekend, the games all matter. Lose a game and your season is over. It’s that simple.