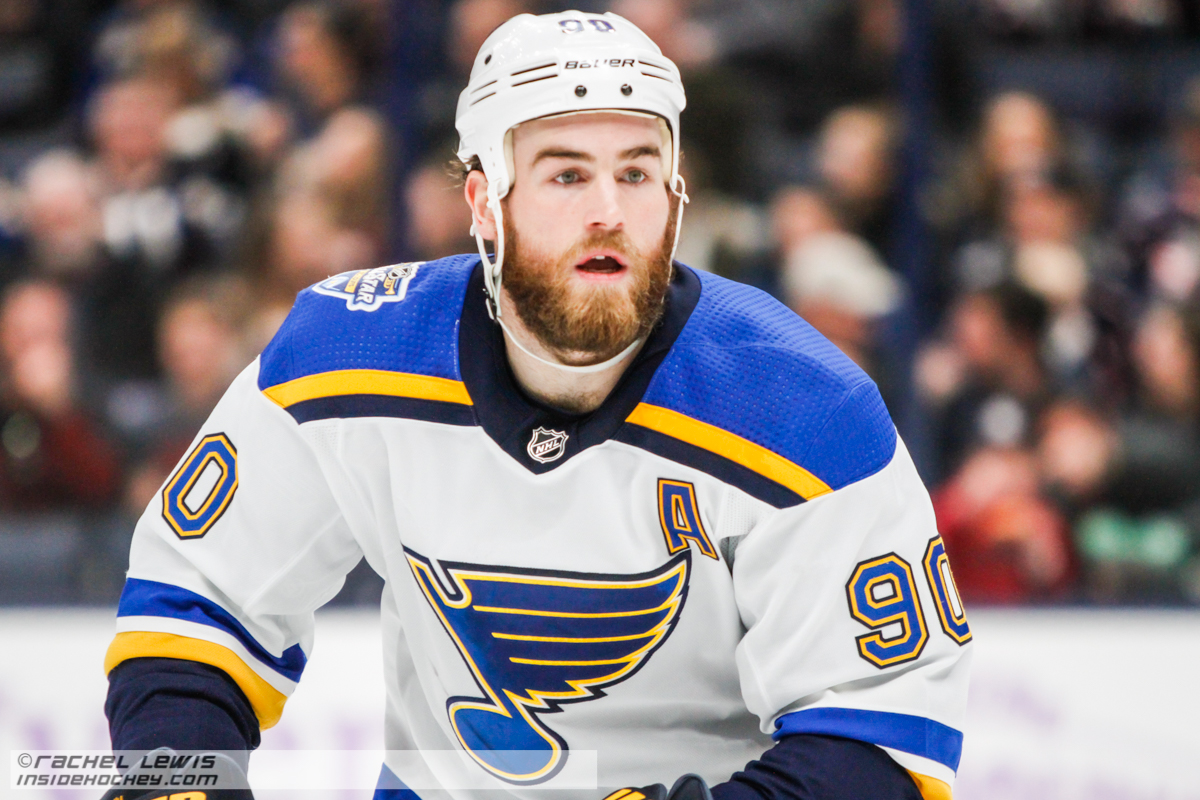 Anaheim’s best period thus far this year has been the second. That’s why it was barely OK that they gave up what had been a solid lead in shots and chances and a 1-0 score as period one ended versus the Blues on Monday night. The give-up came with 56.9 seconds remaining, but in truth, allowing the Blues to tie the game came gradually.

When they got the lead in P1, the Ducks were outshooting the Blues 10-4. By the time they lost it, it was 12-11 for the Blues in shots. The goal came when Kyrou got a dish from O’Reilly through the legs of two Ducks and went to his backhand as he streaked across the slot all alone.

The Ducks had had a four-minute power play, a call on that same Kyrou for high-sticking Max Jones and drawing blood. They did nothing with it. No surprise, as they’re hovering 29th in PP this year in the NHL.

Jones came back with about three minutes gone in period two, by the way, ending the need to line-shift on the part of Dallas Eakins. But the lines were alphabet salad (it used to be soup, but this is the 21stcentury). Prior to that, it was next to impossible to keep track of who was playing with whom. I saw Getzlaf with Silfverg, Getzlaf, with Rakell, Rakell with Comtois, Zegras with Getzlaf, Zegras with Henrique, all kinds of two-of-three forward combos. That’s a partial list.

How’s Zegras, in any case? He tried the lacrosse-style goal in period one, lifting the puck on the flat blade of his stick and trying to sweep it into the net. It went wide. Other times, I saw him spinning his stick in his hands as he stood waiting for a faceoff.

To be honest, neither of these moves is “to code.” You don’t try to embarrass a goalie with a circus-style play, and you don’t adopt mannerisms that say “I’m a superstar” when you’re a newbie who hasn’t managed to put one behind an NHL goalie, ever (aside from in the  shootout last week). In the immortal words of my minor hockey career, this guy is a “hot dog.” And before he starts making gestures, he needs to prove himself. Let’s see what happens.

Flashing back to game action, the Blues, having achieved the tie at the end of the first, enjoyed a power play early in the second period, then another around the ten-minute mark. They would outshoot the Ducks in the frame, 16-7, and outscore them, 3-0 to post a 4-1 lead going into the locker rooms after two.

In a losing effort, it’s hard to find joy. So while I cover the Ducks, let me shift focus for a moment to the goal of Dakota Joshua, the Blues’ fourth tally. It came on a play that immediately followed the faceoff for the third goal, scored by Zach Sanford. Kyle Clifford streaked in on the right side and wisely put a high backhand on Gibson. It was poised for a rebound, and that’s what happened, as it Hit Gibson too high for him to control. It went back to the slot, where Joshua rifled a shot up under the bar to score. Actually, not true—but that’s how he’s going to tell it as time goes on, as the cliché goes. The real goal was a bit more pedestrian.

He was pushing on an Anaheim defenseman as he drove the net, and the puck came off Gibson’s blocker to the slot. It hit Joshua on the way in, and went behind the netminder. A hard-working, gritty goal by a guy who was playing in his first NHL game. On the bench after, he smiled as big as a person can, and it was great to see. Not great for Ducks’ fans, though.

The goaltending matchup was John Gibson versus Ville Jusso. The latter has seven games in his NHL career now, all this year. He looked awkward several times in the first period, as when he missed a poke check on a rush. He goes down and flails often, too, but the Ducks, if they noted this, didn’t press their advantage on such behavior.

Period three saw the Ducks in a hole, 4-1. They quickly erased one of those, with Lundestrom scoring in the first half-minute on a rush where he took the puck down the left boards, went around the net, and managed to put it off the toe of Jusso’s pad on the other (right as you face it) side of the net. Rakell got the only assist. It was Lundestrom’s second goal of the night.

Would there be a hat trick or another type of miracle? Hat trick yes, miracle no. Lundestrom got his third of the hat trick with about five minutes to go. That made it 4-3. So there was some joy  in Anaheim. He sat with the three pucks in front of him to conclude the evening, talking a little bit about the goal and assuring reporters that his family will have seen the hat trick. They  watch him in every  game, time difference or not.

Coach Eakins said in addition, “He just kept coming on as the game went on there. His skating through the neutral zone and his ability to make plays at high speed are getting better. He’s been a bright light since the start of training camp.” He said also, “It should lift everyone, not just the guys he’s playing with.” He cited Zegras, Rakell, and Lundestrom, a line that was put together in period three, as the best one of the Ducks on the night.

About that non-miracle: The Ducks went down 5-3  on an empty netter on the PP, but then with one minute remaining and still being on the power play, Anaheim scored, Getzlaf getting his second of the year. However, that’s where the game ended.

“For us to win it’s got to be a full sixty  minutes; every  moment is critical in those sixty  minutes,” Eakins summed up the game.

The two teams pick it up again two nights from now, Wednesday, still in Anahiem.

Brian Kennedy is a member of the Professional Hockey Writers Association and credentialed NHL media member. He is reporting using team- and league-provided materials from his SoCal home.