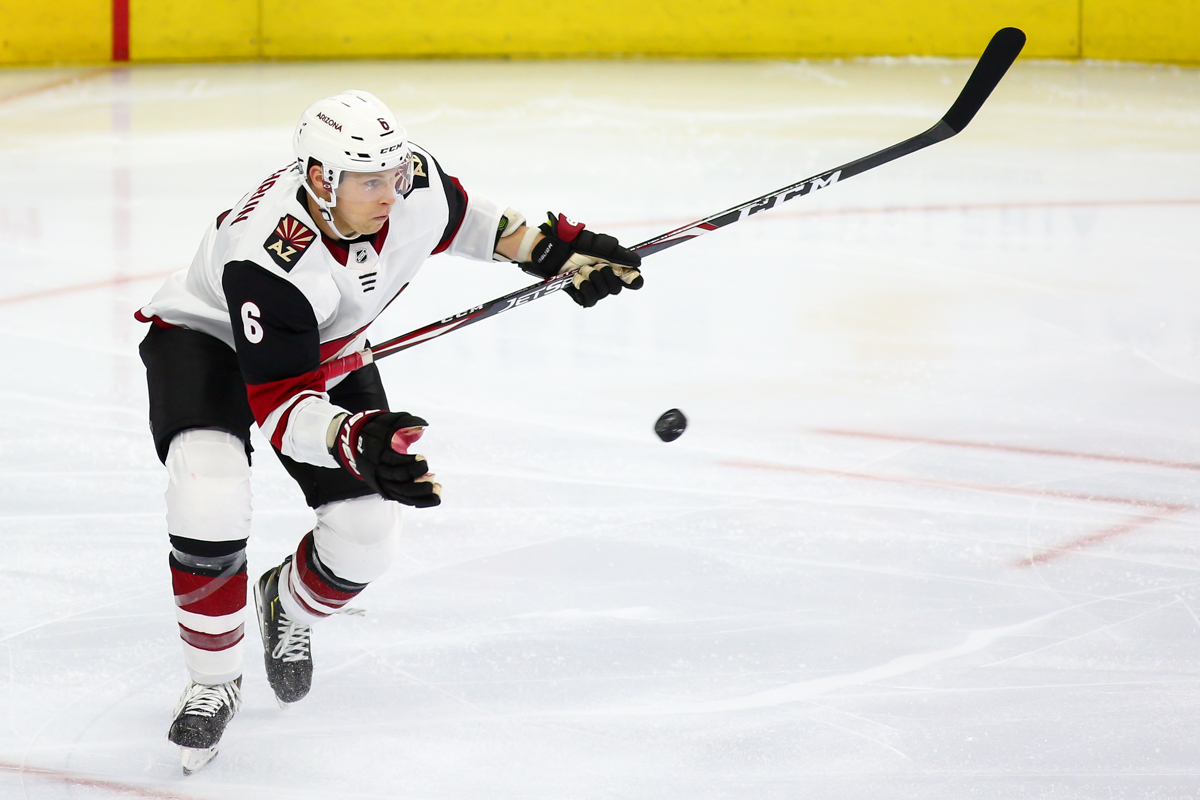 The Anaheim Ducks took on the  Colorado Avalanche Sunday  evening in a game that, like all the remaining ones this year, meant less to the Ducks and a  lot more to the opponent.  At least things happened  in somewhat  spectacular fashion. The two teams have now played all eight games of their season series, and this one was the Jakob Chychrun show.

Here’s the  scoop: all three goals by the  Coyotes were scored  by the  same guy, Chychrun.  The second came with no scoring having happened since  Derek Grant had put the Ducks ahead 2-1 in the  first period. And that tying goal was with  less than five minutes left in the third.

The winner was an OT tally, at 1:47. The Coyotes won  a  faceoff, and Chychrun zinged a wrister from the top of the circle that eluded Gibson. His own defenseman, Manson, might have been in the sightlines. Or it may have been tipped by Fowler out  high. In any case, Gibson shrugged his hands upwards after the goal. He was beaten cleanly  on a wrister from the right dot on a rush on the first goal. The second was a wrister, too, from up  at the top of the circles in the slot.

But the Ducks did have something to celebrate. In the continued merry-go-round of players from San Diego of the AHL, Sam Carrick made his season debut.

Carrick, Captain of the Gulls, has played in 39  NHL games thus far. He took max advantage of this one, scoring the team’s first goal, the third NHL goal of his career, and engaging in a fight with John Hayden. The latter move was not an all-out punch-out, but neither was it the gratuitous “Hey, coach, I’m here” scuffle that you might guess it to be.

Carrick has been there, done that—he was drafted in 2010 in round five after starring with Brampton of the OHL. He has played with Idaho of the ECHL and Toronto, Rockford, and San Diego of the  AHL. He got into 19 NHL games with  the Maple Leafs and now, 16 with the Ducks. His minor-league career spans over 500 games.

Carrick talked to the media after the loss. “It’s the same with every team around the league. You can’t get away  with not working hard, that’s for sure. I think a lot of it is working smart, sticking to our system. We want to be physical, getting in and wearing them down. . . . I thought tonight we did a decent job. It just got away from us a little bit.”

He said of his line, “Playing with two young, energy enthusiastic players was a huge  bonus for me. Dallas and the coaching staff put a lot of trust in our line, and we just tried to do our job out there. Limit any chances against us and . . . create energy.” The three—Jones, Zegras, and Carrick, have played together, including Jones and Carrick in the Gulls’ playoff run of a couple of seasons ago (2019).

The coach, Dallas Eakins, had lots to say about Carrick, who is 29, after the game. “When we called him up, you know exactly what you’re gonna get from him. It’s going to be hard work, and nothing but. You know, when we put together a line, it was really simple. When Max Jones came into the, turned pro, he played with Sammy  Carrick. When Trevor Zegras turned pro, he  played with Sammy  Carrick. And that’s not by accident. You put young players  with excellent, high-character, very good vets like Sammy, so it was an easy line to put together, and obviously there was chemistry there.”

Why would he  say the  latter? Because the goals were Carrick from Zegras and Derek Grant from Zegras and Jones. For Grant, that goal was his third in sixth games, and his fourth point in six contests. Jones has four points (1-3) in his last five games.

Zegras now has six assists to go with his lone goal in 17 NHL games. The coach let slip some information about him after talking about Carrick. “Z, you know what, Z is a rink rat, and he’s always looking to get better. He’s got a lot going on right now. We’re trying to get him stronger as we go through the season. He’s on a program away from the rink, uh, we’re trying to get  him the proper rest, and put him in situations where he can have a, a, success. It’s good to see him be rewarded tonight, because he played an excellent game.”

The Ducks were outshot 31-20, including 15-6 In the scoreless middle period. Backstopping was John Gibson, returned from two separate but each minor health problems that cost him eight of the last nine games. Gibson stopped a penalty shot at 1:41 of OT, his third penalty shot faced this year. (He’s two-for-three in saves.)

What made room for Carrick, to return briefly to him, is the injury suffered by Ryan Getzlaf in Friday’s game. That’s upper body.

Tuesday, the Ducks play  in San Jose. Then it’s two games versus Colorado and two more at San Jose.

By the last handful of games in the season, the Ducks will be welcoming 10% of their usual crowd to the arena. That’s 1717.4  people. No word who will have to get cut in half to make up the .4. Maybe they’ll round up, or down. (Mainly  I’m just checking to make sure  you’re still reading. Tweet me @growinguphockey and hashtag #.4 if you are.)

Brian Kennedy is  a  member of the Professional Hockey  Writers  Association.