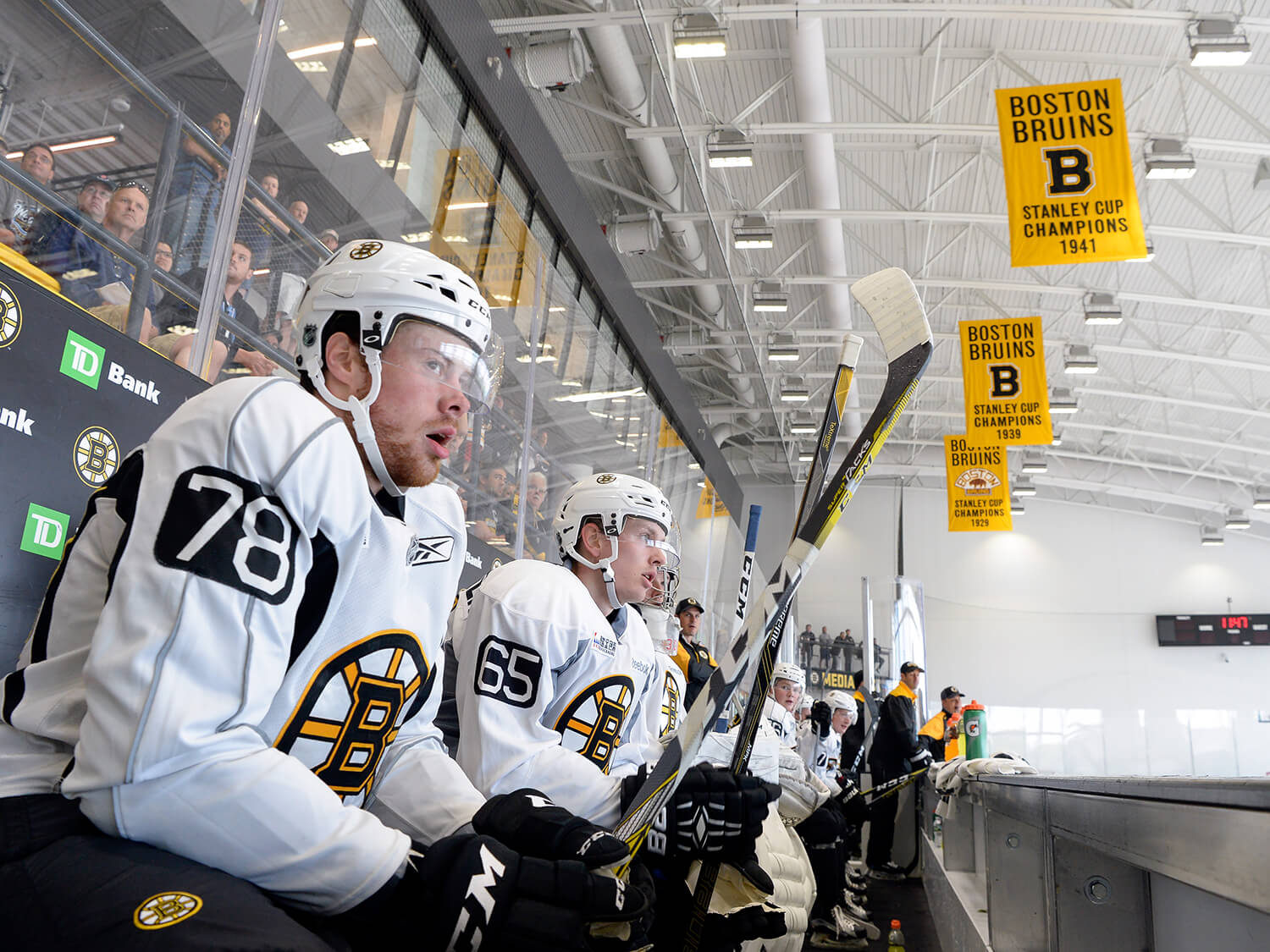 ALLSTON- While plenty of standouts came from Boston Bruins development camp at Warrior Ice Arena over the past four days, perhaps none more so than a pair of Harvard skaters, defender Wiley Sherman and forward Ryan Donato.

The duo were two of the leaders for an upstart Crimson team that found its way to the Frozen Four, and now are going to be relied upon after Harvard lost its hefty senior class.

Sherman and Donato have each seen their share of how a pro camp operates.

“It’s pretty great,” said the 6’7 Sherman. “My fourth year now, I know how it goes, it’s always pretty fun and you learn a lot. A lot of guys here know a lot more than you to learn from.”

It’s hard to to look at a defender of Sherman’s size and not try to compare to the 6’9 captain of the Bruins, Zdeno Chara. Sherman, much more of a stay-at-home defender, locked down on some of college hockey’s top scorers, helping the Crimson hold Hobey Baker candidates such as Mike Vecchione off the board in the ECAC; he helped to shut down one of the best offensive teams in college hockey in Boston University at the Beanpot. He also had a career high 13 points, all of them assists.

Both Sherman and Donato are the longest tenured members of the Bruins’ development camp.

Donato was drafted in 2014, and has already seen two members of his class make it to the NHL. Sherman was selected in 2013.

With it being his fourth camp, Sherman is still looking for ways to learn new things headed into his senior season at Harvard.

“Soak it all in, there’s always a lot to learn,” he said. “Just take it in stride. Try to make the best when someone has a pointer. Get better at whatever they tell you to.”

Donato is heading into his junior season after a 40 point sophomore campaign with the Crimson.

As a veteran of Bruins camp, Sherman is one of the players who has experienced the event at both Ristuccia Center in Wilmington and the new Warrior Ice Arena, the Bruins practice facility of the last year.

“It doesn’t compare,” Sherman said. “This is such a nice place. We all feel pretty lucky to be here.”

This past season, Sherman and Donato were a part of a Harvard team that made history, winning its first Beanpot and ECAC conference playoffs in over 20 years.

Heading into next season, Sherman is one of the key players for a Crimson team returning as a favorite in the ECAC. Plenty of seniors such as Luke Esposito, Alex Kerfoot, Tyler Moy, and Clay Anderson won’t be back next season, and Sherman is going to be relied upon as one of those team leaders before he makes the jump to the NHL.

“Just keep maturing as a hockey player,” said Sherman. “We’ll have a pretty good team next year. Lost a lot of seniors but we’re pretty confident heading into the season.”