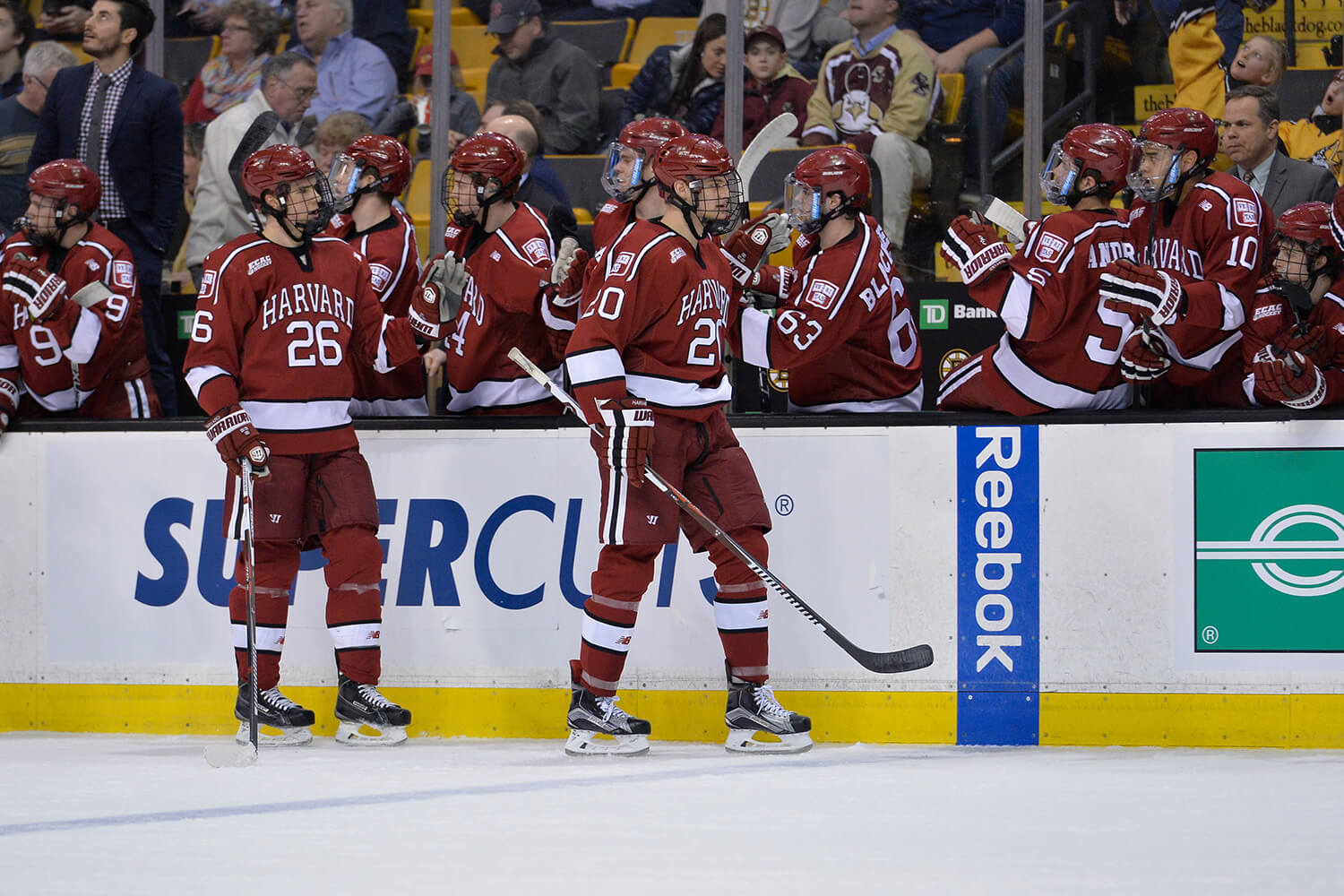 With a spot in the Frozen Four on the line, the Harvard University Crimson and the Air Force Academy Falcons took to the ice at the Dunkin Donuts Center in Providence, Rhode Island. Air Force was viewed as a serious underdog with many thinking Harvard would walk through them and punch their ticket to Chicago easily. Not only was it close, Air Force put a mighty scare into the Crimson and gave the gathered fans an exciting game.

The opening period was even throughout, with both teams skating through early nerves and putting pressure on the goaltenders. Merrick Madsen and Shane Starrett responded well to the rhythm of the game and made excellent saves early on.

Harvard got more chances and took the lead near the midway point of the period when Viktor Dombrovskiy netted a wrister from the high slot. Air Force turned on the jets after the goal to try and tie it, but Madsen was excellent, saving all 10 shots he faced in the period. Harvard took a 1-0 lead into the first intermission.

Harvard looked for the killing blow early in the second period and seemed to get it. At the 7:47 mark, Ryan Donato took a pass from his defense, sliced his way through the Air Force defense, and beat Starrett to put Harvard ahead 2-0.

Shortly thereafter, Ben Kucera was called for hooking and Air Force went on the penalty kill. Alexander Kerfoot found Ryan Donato on the back door for a one-timer to beat the best penalty kill in the country and seemingly put the Falcons away at 3-0. But the Falcons refused to die. Air Force surged just after the halfway point, drawing a tripping penalty by Michael Floodstrand and scoring on a Brady Tomlak putback with an extra skater on the ice to cut it to 3-1.

About 15 seconds after the Tomlak goal, Jordan Himley beat Madsen to cut the lead to 3-2 and get the game tight again. Air Force kept attacking, but could not get the equalizer. Harvard hung onto a 3-2 lead at the second break.

The third period was fraught with tension and thrilled everyone in attendance. Surprisingly, neither team got that many shots; Air Force only outshot Harvard 8-7 for the period. But both teams dished out big hits and kept fighting. Air Force had to kill two penalties, one an interference call on Jordan Himley and one a hooking call on Phil Boje.

They did so and gave Harvard a scare with some good looks at Madsen. With under two minutes left, Air Force pulled Starrett from their net and tried desperately for one last shot. They nearly did it, but Harvard stood strong and sealed their first trip to the Frozen Four since 1994.

After the game, both coaches were complimentary of the effort on both sides. Falcons coach Frank Serratore praised his unit for an incredible season.

“We didn’t come in thinking ‘We’re just glad to be here…’ We came here to win,” Serratore said. “And I am so proud of the way we fought against that caliber of opponent.”

Air Force ends the season with a 27-10-5 record. They won the Atlantic Hockey Conference tournament after barely losing in the regular season finale and thus losing the Conference regular season crown. They fought their way to the NCAA Tournament, winning the second Tournament game in program history, and barely missing out on the program’s first-ever trip to the Frozen Four.

The Falcons are young, only graduating three seniors. AJ Reid, Tyler Rostenkowski, and Johnny Hrabovsky will graduate and be commissioned as Second Lieutenants in the United States Air Force in May. The rest of the team will return hungry to improve on their success this season.

Harvard continues what has been a historic season for the program. They won their first Beanpot since 1993, won their first Tournament game since 1994, made their first Frozen Four since 1994, and will have a chance to win the first National Championship since Ted Donato skated for the Crimson back in 1989.

Harvard remains focused on the task at hand. They celebrated the win, but Alexander Kerfoot and Devin Tringale were quick to point out that they had a bigger goal and a dream for Chicago. They will play the Bulldogs of Minnesota-Duluth in the Frozen Four in Chicago on April 6th.