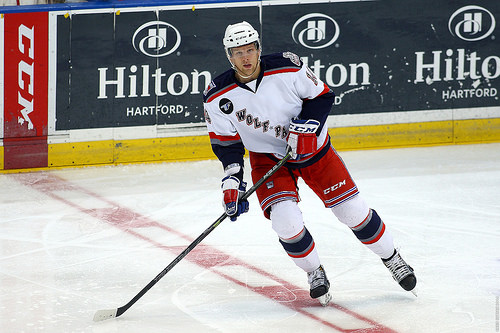 HARTFORD, Conn. — In their first game back on home ice at the XL Center after the All-Star break, the Hartford Wolf Pack (25-13-2-4), who were represented by Chris Bourque in the All-Star Game, were ready to take control and dominate the Bridgeport Sound Tigers (19-19-5-1) –  one of their biggest rivals. The arena was more packed than usual with fans going bonkers as the teams took the ice and the puck dropped at center ice.

Looking back a month or so ago, you’d have to admit the Pack seemed to be stuck in a spiral. However, these past couple of weeks the team has really done a 180 in terms of play. Veteran goalie Yann Danis took the net, pounding his pads ready to get going. At 4:41 the Pack put an early goal up on the board, scored by Joey Crabb, a lucky number seven goal of the season for the right-winger. But with an early goal came a quick backlash. The Sound Tigers fired back with a shot in the net by left wing Justin Courtnall at 5:20. However the Wolf Pack wouldn’t back down and crumble. Chris Bourque came back to take the lead at 7:48, making this his 18th goal of the season for the All Star.

The Wolf Pack just kept plowing through the first period, with a short-handed goal being put in the net again by Crabb. Even with a 3-1 lead though, the Pack slipped up a little bit. At 10:40 of the first, they gave the Sound Tigers a power play, which Bridgeport’s CJ Stretch cashed in on. With the Sound Tigers catching up, the Pack buckled down, gaining a power play at 13:31 Conor Allen, assisted by Danny Kristo were able to set up a great scoring play making it 4-2 Wolf Pack.

Although the last couple minutes of the first were a little rocky, with Allen being penalized for unsportsmanlike conduct, the Wolf Pack ended pretty strong and truly dominated the first period.

Starting off the second period with the remainder of the Sound Tigers power play from Allen’s penalty in the last minute of the first, Bridgeport capitalized on the opportunity scoring at just 1:40 and making the score 4-3 – still in Wolf Pack favor. This couldn’t bring down the Pack who immediately fired back with a goal coming from Michael Kostka on a power play.

With tensions heating up, the game began to get a little scratchy. Penalties began to fly, without losing composure Kristo packed another one in the net making the score 6-3 at 8:50. After the 6th goal, Bridgeport decided to pull goalie David Leggio, replacing him with Kent Simpson, making his AHL season debut. The second finished up pretty heated, with penalties being fired back and forth, however the Wolf Pack still maintained the lead at the end of the period.

The third period began rocky. Chris Bourque was called for holding at just 0:24, a very rare occasion for him. With Bridgeport snagging a power play off the penalty, Scooter Vaughn snuck one past Danis to catch up a little at 3:45. With the Pack slipping up a bit, the Sound Tigers Kael Mouillierat scored while shorthanded, making it 6-5 Wolf Pack at 8:01.

The Wolf Pack by no means was going to let their hard work tonight go to waste despite their poor defensive play. A scoring opportunity set up by Crabb and Kristo at 9:18 led to a second goal by Kristo. The Pack were hungry for more though, and with 1:09 left and an empty net, Marek Hrivik buried another goal to make the final score 8-6 Wolf Pack.

Of course talking to the team post-game the boys were happy with their offensive output but lamented their defensive play and penalty taking.

“It was a crazy game,” said Crabb. “It was weird though, it’s not really the way you want to do it, but a win is a win. We didn’t do everything we should have done. We had a nice first period – but we had a lot of penalties.”

Wolf Pack center Oscar Lindberg said, “We definitely weren’t so good tonight; we really have to get sharper. Those penalties were what kept throwing us off.”

The Wolf Pack will be back home again tomorrow night at the XL Center to face off against the Springfield Falcons (26-14-4-0), another big regional rival of the Wolf Pack.