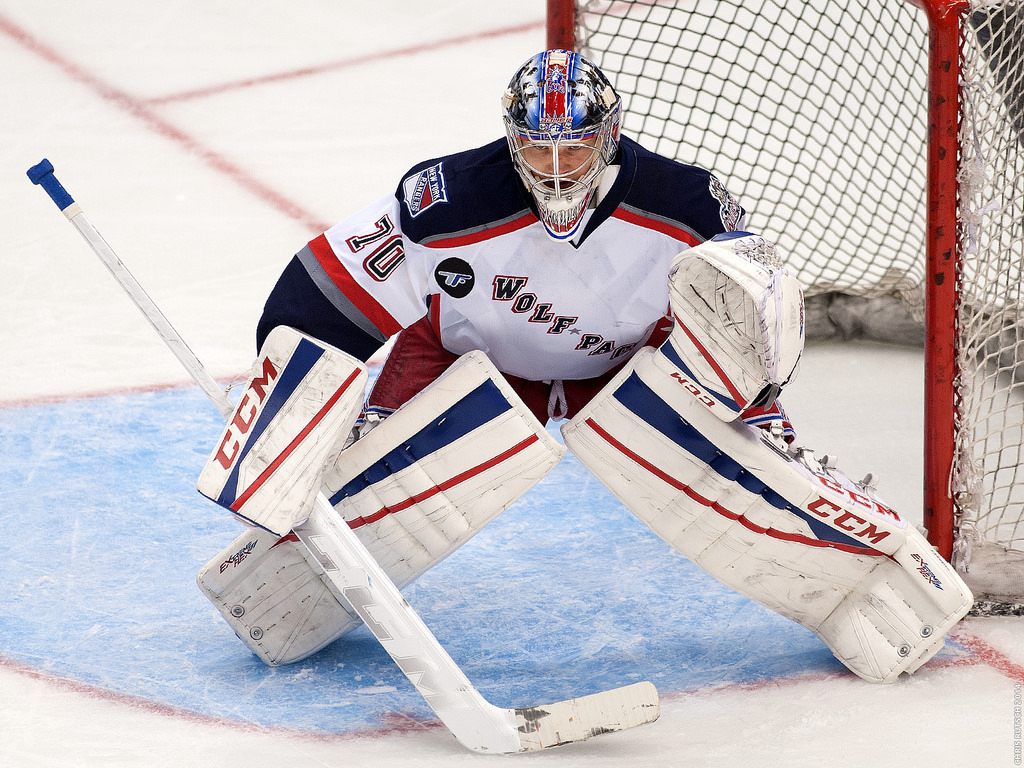 Hartford CT – We’re really closing in on playoffs now folks, only about a month left in regular season play left. What does the future hold of the Hartford Wolf Pack (35-22-5-4)? The odds seem to be in the Pack’s favor, however, the deal isn’t sealed yet; everyone is looking to lock in a solid seeding. Quite literally, many teams are walking on the thinnest sheet of ice – each game is crucial, each game could make or break the season.

After a five-game win streak coming to a close last Sunday with a defeat in the hands of the Albany Devils, the Wolf Pack came back bumping Friday night to face off against the Providence Bruins (35-23-7-2). This is the third meeting between the two clubs, with the initial clashes resulting in one win for the Wolf Pack and one for the Bruins. Coming into this game Providence is only leading Hartford in the Eastern Conference standings by two points – a tight crunch for the Wolf Pack.

Friday night we welcomed back fan favorite, Mackenzie Skapski who’d been called up to the NHL earlier this month. Perfect timing for the rookie to come down; Skapski has continuously been praised for his cool, collective attitude in the net and with playoffs being so near, every team could use a level headed player. Standing tall and strong in the net, Skapski definitely looked happy to be back on his home ice. It was a rather productive first period to get the night going. After a minor slip up, Oscar Lindberg with a call for boarding at 0:41 – giving Providence a power play, the Wolf Pack got down and dirty, hungry for the win.

To prove themselves and satisfy their undying hunger, the Wolf Pack stole the rink. Tyler Brown came in hot with the first goal in the net at 6:58, followed by a second goal in by Ryan Haggerty at 16:43 to shut it down. Going into the second period you’d have to think that the Bruins were shaking in their skates. Although technically having the upper hand in terms of standings and statistics, the Bruins have been on a cold streak lately coming into this game with a three consecutive losses. Not the best time to go cold, something that Providence’s own goalie, Jeremy Smith, knows quite well. Smith is no rookie to the intensity that comes with playoff and championship games being a former ECHL Kelly Cup Champion winner and MVP. With the experience under his belt, a scoreless period for the Bruins could just be a tactic, there’s always room for a comeback.

On a roll, the Wolf Pack started off the second period with a bang. Justin Viave put a third goal in the net for Hartford at 0:26 bringing heat to the ice. Shortly after Bruins’ coach Bruce Cassidy made the choice to pull Smith from the net, relieving him was Malcolm Subban. Even with the switch, Providence just didn’t appear ready to play. 5:27 brought a fourth goal for the hungry Wolves, this time shorthanded by Joey Crabb.

The Pack just kept the momentum going as they entered the third. Another goal put on the board at 4:54 – courtesy of Ryan Bourque. A phenomenal game on the Wolf Pack’s part, Skapski really was shutting out the shots. On the other side of the ice, the Bruins were still shaky in their play and were unable to pull themselves together as the period progressed. The Wolf Pack really clamped down and put the game in the bag; final score 5-0, Hartford.

“We were awesome tonight!” Exclaimed young star, Skapski in a post game interview. Definitely happy to be back with his team, the calm goaltender admitted, “I was a little nervous coming back, I’ve been away for so long, you never know what to expect.”

The big win was one definitely unexpected, “We worked them tonight”, Brown stated, “and they’re a good team too.”

Even Coach Ken Gernander was pretty excited, “There’s always one or two things you wish you could change, but I’m pretty happy with tonight’s game.”