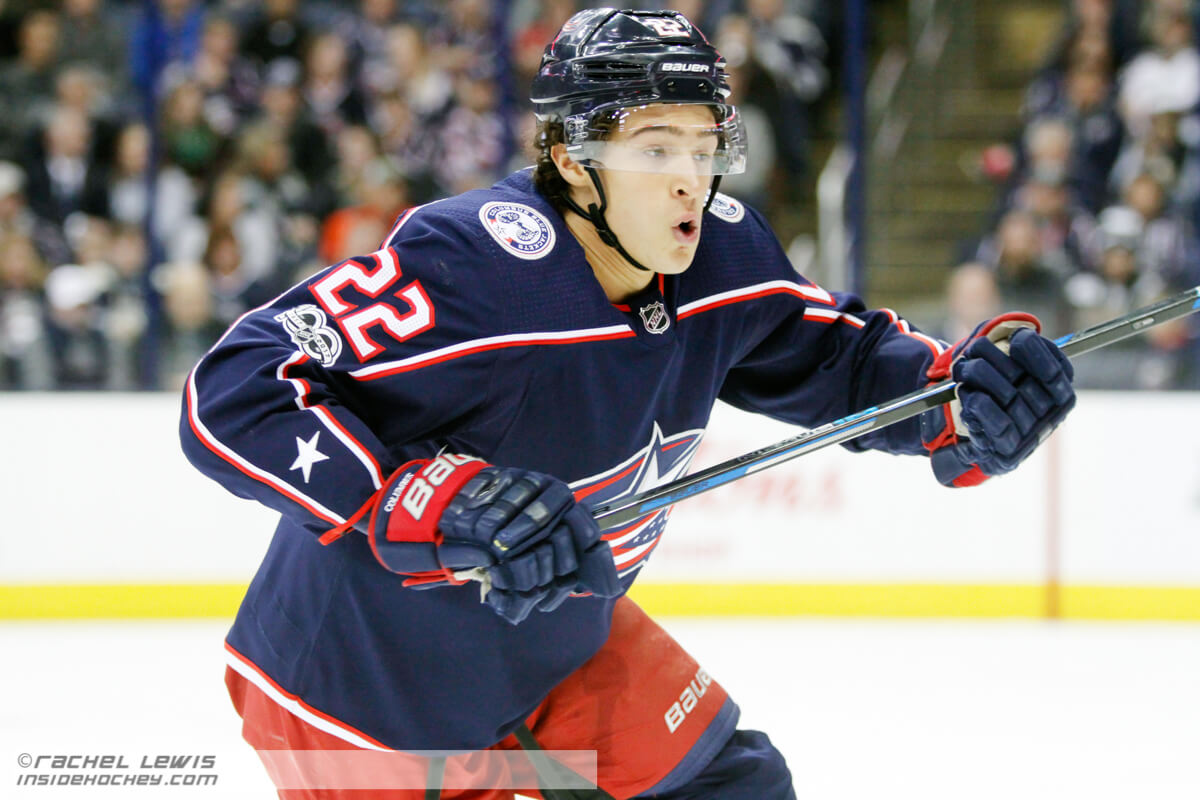 The Ducks had their busiest trade deadline day in club history this week. And the players they got featured the first game out—Tuesday at Honda Center with the Oilers in town. Five new faces adorned the lineup: Sonny Milano (Columbus), Danton Heinen (Boston), Andrew Agozzino (waivers—Pittsburgh), Christian Djoos (Washington), and Matt Irwin (Nashville). Four others did not yet play. We’ll take that up presently.

On the surface, it’s easy to say that nothing here looks all that much an improvement on what was lost. Most of the changes were direct replacements. Christian Djoos and Matt Irwin in for Holzer and Guhle (minors) on defense. Sonny Milano for Troy Terry (minors) at forward; Danton Heinen for Nick Ritchie on second line left wing. Andrew Agozzino at fouth-line center replacing Devin Shore. There was a little more to it when game action began, but overall, these deals are not  to template.

What template says is that a team that can’t score goals and wins, when it does, mostly because it has superior goaltending should be rebuilding, not shifting out parts. They  need prospects and picks.

The GM of the team, Bob Murray, apparently isn’t thinking this way. This could be, perhaps, because he is happy with his AHL guys and does feel that they’re getting near where they  can play  competitively in the  NHL. Some have proved that this year. Some are still working on that.

The total list of additions, by the way, also included David Backes, a prospect called Axel Andersson (both discussed in my story from Sunday—Boston), Kyle Criscuolo (Philly) and Joel Persson (Edmonton). None played.

One great question—why was Backes still not in the lineup on Tuesday? His coach said Sunday night that the team had encouraged him to make a family visit before he came out West, but that was two days ago. Tuesday night, he didn’t play again, but he was there. I know this because I saw him leave in his car late in the evening.

But none of that really matters if you can’t recognize any of these names anyway, and let’s be honest—aside from Backas and Djoos, none of these players are on most fans’ radar. So let’s do some math. First, on the guys in the lineup.

Djoos has two games played this year, with Washington, and 120 in his career.

Milano, who found himself on the first line with Getzlaf at center and Rakell on right wing, played 46 games this year for Columbus. He had a quick impact, scoring the Ducks’ first goal at 5:46 of the first period. It was an all-by-myself play, where he zoomed in to the right corner of the Oilers’ end and picked up a loose puck with one hand on his stick. He pushed around in a counter-clockwise circle and went across the slot. He then pushed the puck up and over goaltender Mike Smith with one hand. Smith was attempting a poke-check at the time.

Danton  Heinen was on the second line, with Henrique at center where he had been on Sunday and Kiefer Sherwood, down from right-wing duties on the first line, on the right. Heinen has played 58  games for Boston this year, with seven goals and 15 assists. He’s been better prior, so the hope is that he’ll reach his potential once more. He had 47 points in 2017-18.

The third line was intact, as it has been for a number of games, with Max Jones on left, Sam Steel at center, and Jakob Silfverberg on right wing.

Andrew Agozzino was at center on the fourth line displacing Devin Shore, who was traded to Columbus for Milano. Alongside them was familiar face Carter Rowney. Agozzino is a long-serving minor leaguer who has 39 games on his NHL resume, with a single goal.

But total that all up and you’ve got essentially worse numbers than by those who left, and with very little extra compensation in the form of draft picks earned. The team got couple of draft picks, the most important one being the first-round pick of Boston in the Kase trade. The other draft choices were crap shoot-type late-round selections.

You know about the first goal. The second was the result of a push for the Ducks. Perhaps their energy came in the form of 25% of the lineup being different from what it was Sunday night. The Ducks actually picked up the first two goals in the first period. Deslauriers got the other, with defenseman Larsson and Del Zotto assisting.

Captain Ryan Getzlaf said after, “Sometimes a lineup gives you a little spark. I thought they [new players] came in and played a strong, simple game, and our guys responded well to the trade deadline and went out on the attack and got some things done tonight.”

One of his linemates on the night, Milano, said, “Playing with two really good, smart players, made it easier for me. It’s definitely a different system, but it might fit my style a little better, and it’s good.”

As the captain suggests, perhaps it was that they were playing a simple style, since it would have been impossible to get this many guys acclimatized to “the system” of their new team  this fast. And, not to be forgotten—it’s hard to imagine that any one had any chemistry with so many changes. But then again, the Ducks have had a shifting lineup all year as they’ve tried various guys up and down from the minors (AHL San Diego).

Adam Henrique gave his opinion: “Strange day, with  the  number of different faces coming  in. A lot of times, it’s one or two guys injected in, but tonight it was a lot of guys, but I thought everybody did a good job just coming in and playing hockey. Everybody walks through the new system and changes, and there’s a lot to go through, but for us, we’re people of habit. You come into the room and you have your routine, and all of a sudden it’s the trade deadline, and .  .  . everything’s different. So it was nice to see a lot of guys get onto the score sheet, and good on the back end, too, with physicality that I thought was great .  . .  .  You hope to build that chemistry now, and I’m sure there will be a number of different line combinations to see who goes where. There’s a lot to play with still, but tonight I thought everybody did a pretty good job.”

On the other side, Edmonton didn’t look terribly inspired on the evening. They scored none in the first period and had just six shots to the Ducks’ ten. Tired from doubling up the Kings, 4-2, on Sunday?

They did look a bit better in the second period, but that could have had something to do with Hampus Lindholm of the Ducks going down to injury after he hit the end boards. In fact, the Oilers started out period two stronger, with a puck going to the net through a screen right off the hop. They scored at 9:09, Tyler Ennis getting his first as an Oiler after he was dealt there from Ottawa. The goal was a brilliant three-way pass assisted by Athanasiou and McDavid.

The second period ended 2-1 for the Ducks. The shots were 10-5 for Edmonton in the period.

The Oilers tied the game with less than five gone in the third. This was classic Draisaitl-Nugent-Hopkins-McDavid, who was on his way to a three-assist night.

Henrique got one back for Anaheim. He continues to lead the team with  24 goals, He has six points in his last two games and 12 in his last eight. This made it 3-2, but the Oilers managed to knot it again at 15:25 of the third. This time, it was Athanasiou  scoring with Ennis and McDavid assisting. So that made for two-point nights for Edmonton’s two main trade deadline acquisitions. Seems the theme of the evening was new guys showing their stuff.

Getting back to the Anaheim side, they concur with that  theory. Here’s Milano again: “Everyone was welcoming, and everyone’s super nice to me. It’s made me feel pretty comfortable. I got some text messages from the veterans, and when I got here, Getzlaf kind of ran me through everything, and it definitely made me feel comfortable.” Milano commented that he wasn’t sure what to expect in terms of playing with Getzlaf, but that he thought it worked out very well. “I kind of watched Getzlaf growing up. I kind of knew how he played. He’s got a good mind and thinkgs the game through. I knew if I got open, he’d find me.”

Getzlaf reciprocated the good words: “We played well as a unit. I thought we simplified the game, which was good, played a strong north-south game there and took their guys away.”

He also commented, “[Milano] worked well away from the puck and got in on the forecheck and surprised me a little bit with his strength along the boards and the plays that he made, which was great.”

Coach Eakins was also generous about how things went: “Milano had a good [game] with two goals. For all those guys coming in it was an exciting day for them, but you’re never sure what will happen when you plug five into the lineup, but obviously with Sonny coming in, this certainly bodes well for his confidence.”

“They all played with pace in their own way,” he added, “We encouraged them to go play hockey tonight. Don’t be worried about learning all the systems. You’re not going to learn them all in one day, and the message was to trust themselves. And if you’re not sure on the ice, you  should have somebody talking. . . . I thought our whole group did that. They trusted themselves well.”

He  summed up: “It was kind of like a giddy energy, like, ‘OK, we’ve got a fresh start here.’” He means that for everyone.

So the game went to OT, and Milano got his second of the night, seventh of the year. Henrique and Getzlaf assisted. The Ducks, finally, are back to winning,

Hampus  Lindholm’s condition was not updated by Eakins after the game, though  he was asked.