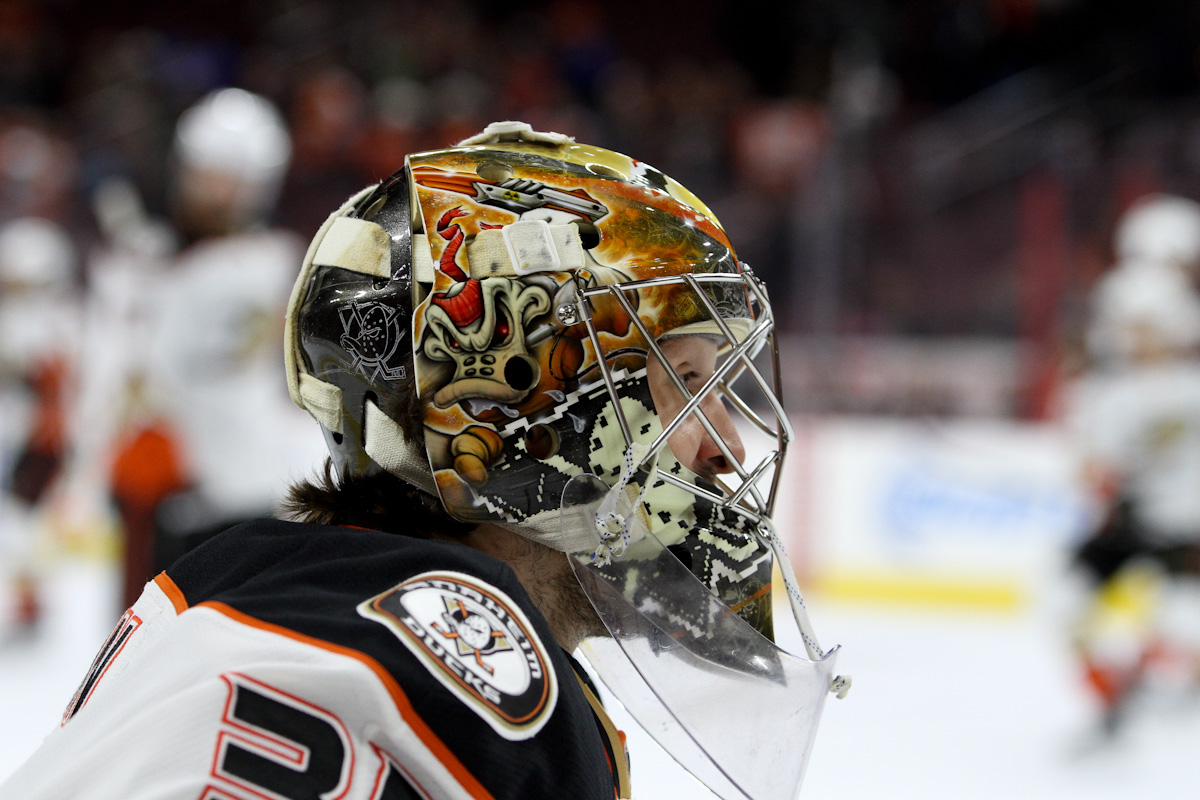 Anaheim’s John Gibson was unavailable for comment after Sunday night’s game versus the Lightning in which the Ducks gave up 37 shots, took 29, and lost 2-1. Had it not been for Gibson, it would have been 5-1. Or worse. Definitely, it would have been much worse.

It would have been, in other words, what it was for two other fine goaltenders the Tampa Bay team destroyed on their run through California last week—a drubbing. Jonathan Quick let in five. Martin Jones let in four and his relief, Aaron Dell, one more.

Why was Gibson unavailable in the locker room? One guess—pure exhaustion. Another—disappointment that after doing everything a single body could do, he lost. Maybe he was in repose, gathering himself to face the world. It wouldn’t surprise me if he saw pucks flying at him as he drove home. That’s how busy he was in the Anaheim net.

Things started off crazy, and they never let up. He faced two breakaways in period one. One was a stretch pass from Hedman to Yanni Gourde on which Gibson made an arm save. The other was Nikita Kucherov flying in on a failed Anaheim clear. The puck went up high and wide with a corner picked.

Heck, at the buzzer to end the period, there was a slapshot that Gibson had to find after it was redirected and slowed down. This not to mention the slapshot mid-period that he made a leg save on before it deflected off the right post behind him.

In period two, he again faced a gauntlet of Tampa Bay chances. Again, he shone, though he let in a goal. But on that, he had done a full, flying splits save and just couldn’t get back into position for the rebound, which defenseman Vatanen failed to clear.

By the end of that frame, he was down 1-0, but a one-goal game it was not. And another defenseman, Brandon Montour, did Gibson no favor when he chased a breakaway back to his own net. Gibson made a save on the shot by Ondrej Palat, but then Montour plowed over him and landed in a heap on top of him inside the net. With friends like that . . . (who needs enemies?).

The Ducks actually tied the game at 1-1 in period three, and appeared to again after TB went up 2-1. The potential tie was on a goal that Vasilevskiy clearly scooped out of the net with his glove hand. Unless you’re the NHL in which case it would take nearly seven minutes to decide that, no, in fact, that puck that clearly couldn’t have been anywhere else was, most definitely, um, we think, ah, not in the net. Yeah, that.

Play went on. Later, a whistle. “And now in net for Anaheim, Reto Berra.” Good thing this isn’t baseball, where the announcement means you’re in, and the other guy is finished for the night. Because almost no sooner had that been said, and Gibson disappeared down the Ducks’ tunnel, than it was, “And now in net for Anaheim, John Gibson.” No time had expired, as the players and crowd were waiting out a long commercial interruption. So off Berra trundled, and out came Gibson.

The official reason? Equipment. The whispers in the press box? Pee pee. Hard to believe, and unconfirmed. Gibson had been over to the bench for a skate check some time before.

Anyway, this guy was, in a sense, in a pissing contest. And he won it. Though Jon Cooper of Anaheim said after the game that both goalies were excellent, he’s just shining one on. Vasilevskiy wasn’t bad. He just didn’t have to be all that good. Anaheim wasn’t really that close to the net all night. But Gibson. Oh, baby.

The third period saw yet another spread-eagle save off Stamkos, who ended the night with four shots. And there was a dive on a wraparound try by Brayden Point. Gibson would probably tell you these all blur together, and maybe with this much frenzy of activity, they do, but for the viewer, it was a visual feast.

I’ve seen a lot of games played by Jonathan Quick, and it’s pretty much guaranteed that you’re going to get one or more golden, amazing, ten-bell saves out of that guy on a given night. I don’t remember many games, played by any NHL netminder, where there were so many saves that were so explosive, and so timely, as what Gibson made.

It’s a shame the Ducks didn’t win. It will be more of a shame if their fans don’t keep this game in mind for a long, long time. It’s going to be a while before they see another one like it.

John Gibson made the Ducks look good. In fact, he made them look way better than they are right now, still suffering the loss of most of their marquee players, including Getzlaf, Kesler, Eaves, and Fowler, and some role players, including Jared Boll and backup netminder Ryan Miller.

What a drag that for all his efforts, he didn’t get a result. Or, rather, he did—a loss on his lifetime record, a tiny blemish, to be sure, but one that will stay there. What bad luck, because this might have been the most amazing goaltending performance many Anaheim fans will ever see. It certainly ranks up near the top for me, and I’ve seen more than 550 NHL games live.

Patrick Eaves, diagnosed with Guillian-Barre syndrome, is back to working out after spending a week in the hospital. Reports vary about the severity or type of his condition, which is rare world-wide, let alone amongst professional athletes.