Getting Attached to Players: A Risky Game

Getting Attached to Players: A Risky Game

NEWARK, N.J.–In his seventh season with the organization, Adam Henrique’s popularity only figured to go up. Six years after the biggest goal of his career, the overtime series-clinching goal in game 6 of the Eastern Conference Final over the rival Rangers, he was still a fan favorite. His 257 points in 455 regular season games were only part of it. Away from the rink he was just as admired. From his interactions with fans and in the community to his social media presence, he was one of the faces of a new aged Devils.

As a rookie, he was part of a surprise run to the Stanley Cup Final with the club. It’s been his only appearance in the postseason to date, but that looked like something destined to change behind a newlook, rookie-infused roster. But hockey isn’t always fair, that evidenced by Henrique’s trade to Anaheim last month, a deal announced just two days after his “Rico Soiree,” a Movember and men’s health awareness benefit.

In his return to Newark and the Prudential Center on Monday, Henrique was welcomed back to a sellout crowd, many wearing his No. 14 jersey. A minute and a half video tribute played during the first stoppage of play and was followed by a half lap and stick raise to the fans. When the ex-Devil tallied on a nifty alley-oop pass to himself in the second period, fans in red and white cheered the familiar party of the opposition. It was, by all accounts, a night of mixed emotions. 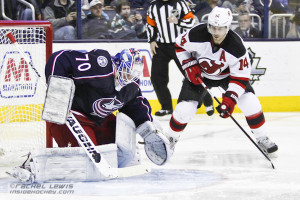 “Nervous, anxious, excited, a little bit of everything kind of came into it tonight,” Henrique said following Monday’s return versus the Devils. “It’s not really awkward–it’s fun. You know all those guys, obviously you play a lot in this rink with those guys and practice. I just needed to get through those first five minutes and settle in.”

It’s inevitable, but getting attached to players isn’t without risk for the average fan. The NHL, with its emphasis on youth, developing through the draft and managing the salary cap, has made it hard to keep everyone around. Even those held in the stature of Henrique are fair game. And for as hard as it was for Devils’ GM Ray Shero to deal one of the club’s most recognized players, it would have been just as challenging to say no to the deal, which sent over a 26-year-old defenseman that can play any situation and is a coveted right-handed shot.

It was Vatanen’s shot that was tipped in front by Miles Wood on a second period power play that got the Devils back in it after trailing 2-0. They’d erase another deficit in the third before scoring twice in the final five minutes to win 5-3. The point was the blueliner’s first since his trade, but points only tell part of the story for a welcomed addition to a defense that needed help.

Since joining the squad, Vatanen has been among the leaders in ice time. On Monday, he averaged a team-leading 23:25 while registering three shots. He’s another shot from the point on the team’s power play and has allowed veteran, Andy Greene to lessen his workload by roughly three minutes per game. That figures to bode well in John Hynes’ up-tempo system. He was a popular item in Anaheim, part of one of the best D-corps in the NHL alongside Cam Fowler, Hampus Lindholm and Josh Manson. A rash of early season injuries to the Ducks forced them to make a move and break up the top-four that has long been one of the organization’s greatest strengths. Even if the cliche of “it worked out for both sides” applies, it’s a tough sell when dealing with successful players.

Trades and other transactions aren’t a walk in the park for the players either. Last season, Anaheim tried to send Stefan Noesen to their AHL affiliate in San Diego, but New Jersey opted to take a chance on the former first rounder and claimed him off waivers. He’s adjusted well in his second season as a Devil and had one of his finest outings on Monday scoring two goals in the third including the game-winner and an empty netter. Even though he admitted he still has friends on the Ducks, it felt good to hand them the loss.

“Yeah that’s (the game winner) the icing on the cake and the empty-netter is the cherry on top,” Noesen said after his first game versus Anaheim since being with the organization last year. “You always want to beat your old team no matter who it is.”

Noesen, who has become an important bottom-six player to the lineup and has added a scoring touch with 10 points in 26 games, knows that regardless of the opponent you have to battle hard.

“You still have friends on that team. When we’re out there on the ice, we want to hit them but we don’t want to hurt them. You want a good healthy battle. That’s just the game.”

For most fans, getting attached is unavoidable. Just another cautionary tale in being a sports fan and while sports lends itself to a certain level of emotion, it’s easier on you than them.

Coyotes Need a Recipe for Success

The Arizona Coyotes need both a permanent home to call their own and a string of successful draft picks to help develop this franchise into a contender in the Central Division. Edmonton native and 2021 first round draft pick Dylan Guenther is one of those key pieces of the puzzle who may help this franchise in the long run.