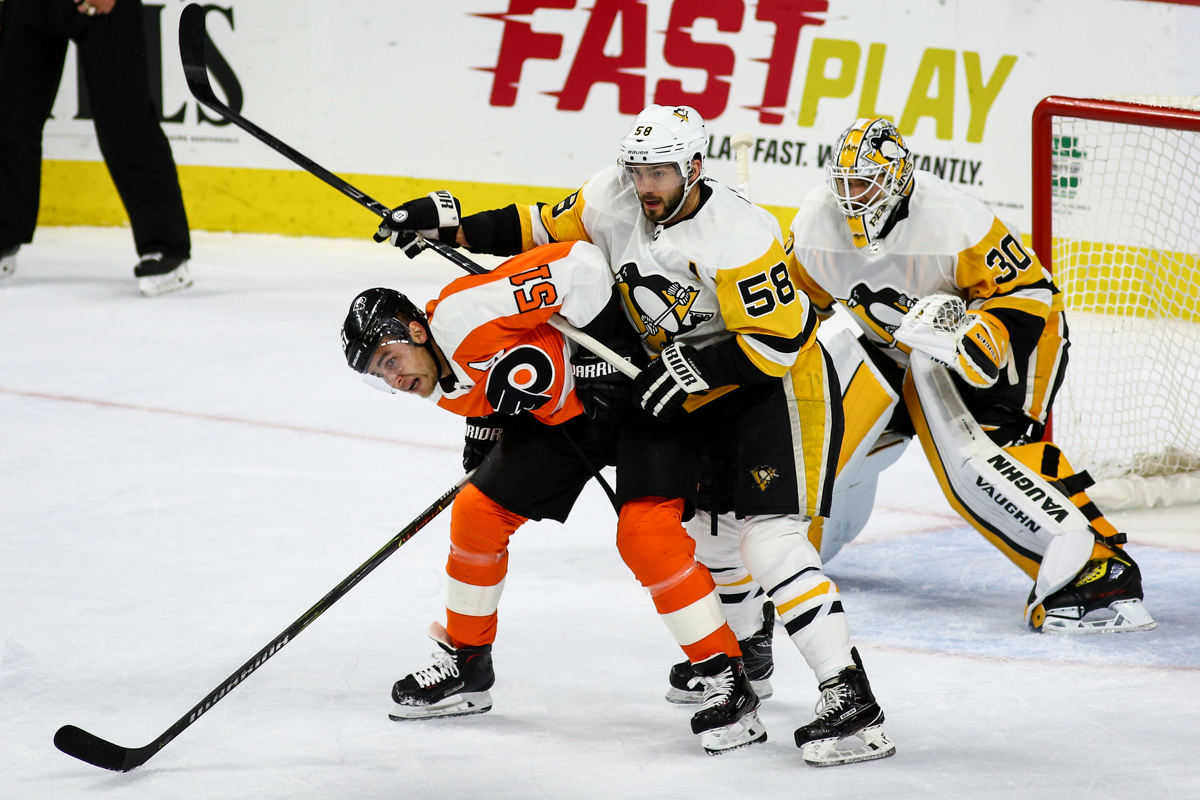 Maybe the Penguins needed more time to decide who really serves up the best Whiz with, or wanted another run up the Rocky Steps.

Because, although they said all the right things about wanting to finish off the Flyers on home ice in Game 5, the Penguins played a sometimes sloppy, unopportunistic game that looked destined from the early going to send the series back to the City of Brotherly Love.

The Flyers started with the kind of desperation that’s tough to manufacture for a team not facing elimination, while the Penguins came out flat.

“I think [the urgency] came in the second and third; I don’t think it was there in the first,” said Penguins captain Sidney Crosby. “I think we took a while to get into it.”

“We could’ve gotten out to a better start there,” said defenseman Brian Dumoulin. “We knew they were going to come out hard at us. I think we were passing up shots a little too much, and they did a good job countering.”

Pittsburgh’s league-best power play, meanwhile, was a key story in the game for all the wrong reasons. It couldn’t score on any of its five opportunities on the night, had just a single shot on at least two of those chances, and turned the puck over for a shorthanded goal.

“Our power play had an opportunity to be the difference,” said Penguins head coach Mike Sullivan. “It wasn’t, but most nights it is. I just didn’t think it had a lot of movement. I thought it was stagnant, and we’ve got to make sure the puck moves and people move. When they do that, they’re a dangerous power play.”

After being outshot in the first period, 9-5, and letting up the first goal to Flyers captain Claude Giroux late in the opening frame, the Penguins battled back in the second. They got goals 4:45 apart from Bryan Rust and Jake Guentzel, two young talents who often step up in big games.

A few seconds after Guentzel’s goal, the Penguins went back to the power play with a 2-1 lead, three minutes remaining in the second period and a chance to put the Flyers on the ropes.

Instead, Phil Kessel turned the puck over in the Penguins zone. Philly veteran center Valtteri Filppula took a long shot on Pittsburgh netminder Matt Murray, who failed to control it. Filppula then skated in to get his own rebound, putting it past both Murray and defenseman Kris Letang.

The Flyers went to the locker room feeling upbeat. The Penguins had outshot them 14-8 in the period, but were looking at a 2-2 tie on the scoreboard.

“That was a huge boost to our hockey team,” said Flyers head coach Dave Hakstol. “Not just getting the kills, but to come back and score a shorthanded goal. The timing of it was huge; they’d just gone up 2-1, all the momentum going their way.”

Pittsburgh outshot the Flyers again, 13-8, in the third period, but the only goal that made it into the net came from center Sean Couturier, who returned to the lineup after missing Game 4 due to a collision with teammate Radko Gudas in practice.

Couturier played on the third line instead of his usual first-line role as Hakstol eased him back into the lineup. But he was a force on Philly’s 5-for-5 penalty kill, playing nearly seven of his 16:55 minutes shorthanded, then collected a bouncing puck at the point to beat Murray over his glove hand with just 1:15 remaining.

Couturier breaks the tie late in the third period. pic.twitter.com/LtODLNDv5x

“A close game like that, anything can happen,” Crosby said. “They get a bounce there late and that’s the story of the game.”

“Him being in the lineup gives a boost to everybody, just because of what he means to our hockey team,” Hakstol said. “But it comes down to going out and doing the job, and he did that. He played a few less minutes tonight than he normally does, but I thought he did a heck of a job. On the PK he was a huge factor for us, and not just [on] the winning goal but down the stretch in the third period.”

Although Crosby came close with a chance in the final minute, Couturier’s goal held up as the game-winner. Forward Matt Read added one more into an empty net to arrive at the 4-2 final.

For the Penguins, there were reasons to be positive going into Game 6, which takes place Sunday at 3 p.m. Eastern. Although they didn’t like their start or special teams play, they cited their resilience in the second and third periods and never felt they were dominated in the game. They also seemingly dodged a bullet when star center Evgeni Malkin returned after a scary collision that looked to have caused a leg injury.

“We’re disappointed we didn’t get it done,” Sullivan said. “Having said that, I thought there was a lot to like. We didn’t give up a whole lot of chances, especially in the third period, [but] one of them ends up in our net.”