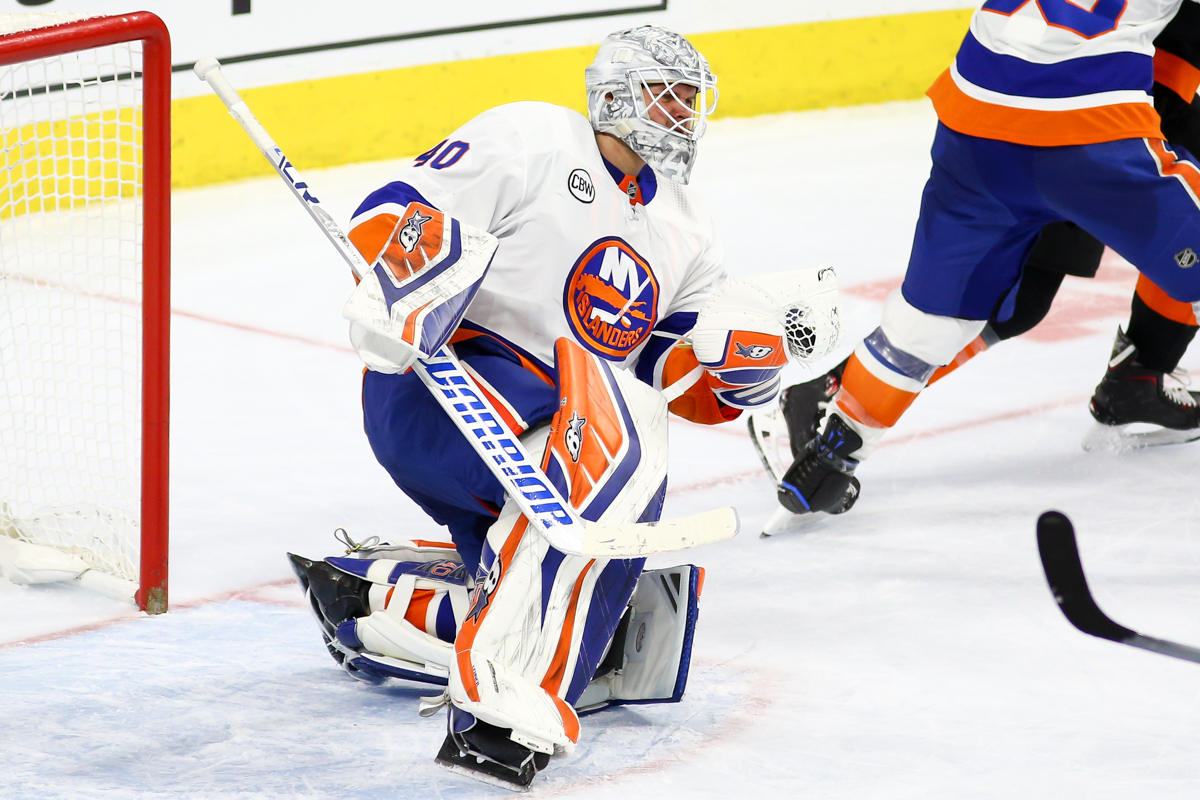 Down 0-2 in their first-round playoff series, Penguins head coach Mike Sullivan was asked how he hoped his team would approach Game 3.

“A lot of people use the word ‘desperation’ to describe certain situations. I’m not sure I like that word because it implies a certain level of hopelessness. I try avoid that word; I just don’t think that’s the mindset we need. We’re in complete control of the circumstance. We just have to make sure we go out and win a game.”

Unfortunately for the Penguins, as it turned out, the Islanders had other ideas.

The Penguins got the start they wanted, with fourth-liner Garrett Wilson opening the scoring at 12:54 of the opening period. With the Islanders effectively shutting down the Penguins’ top-line stars, Wilson’s net-front redirect of defenseman Marcus Pettersson’s shot exemplified how they need to simplify their game in this tight series.

“They defend hard and get in lanes,” Wilson said. “We’ve got to find a way to get tips and screens and rebounds. [Islanders goalie Robin Lehner] kicks them out and they’re there. We just have to do a better job of getting to them.”

It took just 1:30, though, for the Islanders’ Jordan Eberle and Brock Nelson to turn the Penguins’ 1-0 lead into a 2-1 deficit.

“Our bench was really good,” said Islanders head coach Barry Trotz who, between the Washington Capitals and Islanders, was facing  the Penguins for the 21st time in the past four postseasons. “This is a fantastic building to play in; the fans are great. They get the first goal and it really hasn’t fazed us all year; we’ve been pretty even-keeled about that. But getting a quick response like we did was key. The people are happy and, before they announce the goal, we get it tied up. That was good.”

“They’ve gotten some opportunistic goals,” said Penguins head coach Mike Sullivan. “We get a big goal at the end of our power play and they were able to come back and answer it in a fairly short timeframe. And it seems like in each game at this point, that’s occurred. We’ve got to do a better job of hanging onto momentum when we get it.”

Under Trotz’s system, the Isles’ attack was fast and relentless. They pressured Pittsburgh into quick decisions and mistakes that New York was quick to exploit, like this one from Nelson that gave the Islanders the 2-1 lead.

Brock Nelson capitalizes off a bad Penguins pinch to snipe the go-ahead goal in Game 3. pic.twitter.com/93YaqWoaWM

“We give them a 2-on-1; we’ve got to make better decisions in that area of the rink so we don’t give them that type of high-quality chance,” Sullivan said. “There’s not a lot of risk associated with the Islanders’ game. They’ve got numbers back; they’ve got a defense-first mentality. That’s been their identity; that’s what brought them success.

“We know what we’re up against. We’ve talked about it since before the series started. Our identity is a little bit different. We have to have more of a discipline associated with our game in the critical areas of the rink so that we become a team that’s more difficult to play against.”

But the Islanders kept up the pressure in the second, dominating the Penguins 16-9 in shots and 56.52% to 43.48% in even-strength possession, and holding Pittsburgh’s power play off the board in two opportunities. The third went much the same way, with New York continuing to drive possession and patiently waiting for their opportunities.

They got one at 10:27, with Leo Komarov sniping his first one of the postseason off a cross-ice pass from Anthony Beauvillier, and the Penguins’ Matt Cullen and defensemen Justin Schultz and Jack Johnson helpless to do much about it.

Komarov gives the @NYIslanders a 3-1 lead midway through the third. #StanleyCup pic.twitter.com/5KD5E9eTtc

Against this Islanders club, the 3-1 deficit loomed like a much larger one, and an empty-net goal by Anders Lee at 18:32 sealed Pittsburgh’s fate. Down 0 games to 3, the Penguins will face elimination – a sweep, no less – on their home ice Tuesday night.

Pittsburgh simply appears to have no answer for the Islanders’ systematic approach to shutting down its ability to generate offense.

“They defend hard,” Cullen said. “Their goaltender’s playing well. They’re getting some solid D from all of their lines; they’re committed to five guys in the box there in front of the net, and they make it hard to get pucks through and get second chances. It’s nothing we weren’t prepared for; we just haven’t found a way to get a few past them. Until we do that, we’re not going to win.”

“You’ve got to find ways to score goals this time of year,” said captain Sidney Crosby who, while still scoreless, had his best offensive day of the series with three shots and six attempts. “It’s not easy but you’ve got to find a way to do it. It’s a game of execution and we haven’t done as good a job as they have.”

“I don’t think we created a ton tonight,” said Phil Kessel, who was one of the Penguins’ best players in the first two games but held to one shot and two attempts in Game 3. “There were some chances here and there, but nothing really going.

“They’re playing well. I haven’t done enough, and I guess we just haven’t adjusted. They want it, and we’re going to try to have to get the next one here.”

If they don’t, an organization that was dreaming of a Stanley Cup three-peat just a year ago will be heading into the offseason after just four playoff games.

“We’ve just got to focus on winning Game 4, and we haven’t left ourselves a lot of room for error,” Crosby said. “But all we can control is coming here with the right mindset for Game 4 and find a way to get a win.

“We can’t even it up in one game, but we can get ourselves back in it.”

The Islanders, too, aren’t thinking too far ahead.

“We don’t worry too much about matchups and fret about things; we just understand we’ve got a certain structure and a certain way we do things. That’s why we have success.”