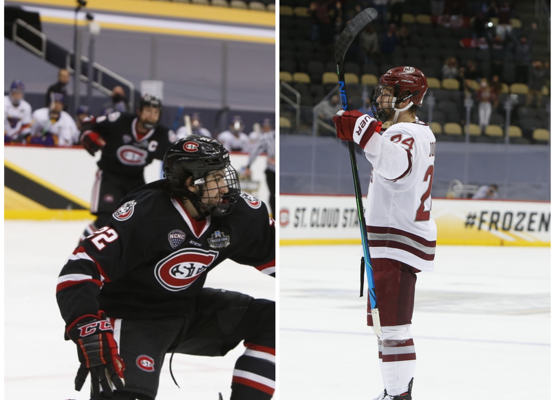 Pittsburgh, PA – The stage is set, the combatants are ready, and the 2021 NCAA Men’s Ice Hockey Championship will take place on Saturday evening at PPG Paints Arena in downtown Pittsburgh at 7 pm. The winner is guaranteed to be a first-time National Champion. Will it be the St. Cloud St. Huskies who are playing in their first-ever title game? Or will it be the University of Massachusetts Minutemen who are playing in their second straight title game?

The NCHC is once again able to be the national champion’s home for what would be the fifth straight year. Hockey East would like to snap that streak and start one of its own. The last team to win from outside the NCHC was Hockey East’s Providence College in 2015.

St. Cloud comes into the game riding a three-game winning streak. They are playing their brand of hockey, “Huskies Hockey.” It is a similar brand that UMass plays.

“I think it’s going to be two teams with very similar game plans,” said Huskies coach Brett Larson. “You saw where they scored most of their goals last night. That was right within two feet of the net.”

“Obviously, for us defending that area is going to be critical and doing the same thing in their end as we did last night. We were able to get a few right in the grease pan.”

“I think it’s going to be a game of two similar teams,” added Larson. “Two teams that play hard play fast. They (Massachusetts) have a high work ethic. I can see that. They have high skill, and they’re not afraid to get to the tough areas. It’s certainly going to be a battle.”

The Huskies will rely on David Hrenak to play a better game than he did on Thursday night. You can’t let UMass score four goals on you and expect to win.

St. Cloud will look to keep riding the play of sophomore Kyler Kupka, who has elevated his game with a promotion to the top line in Easton Brodzinsky’s absence. Notching a goal and an assist against Minnesota St. Since playoff hockey began in March, Kupka has five points in six games.

Massachusetts hasn’t lost a game since January 18. A 4-3 overtime loss against Boston University. In that stretch, the Minutemen are 10-0-3.

The Minutemen pulled off the win over Minnesota Duluth without Filip Lindberg and Carson Gicewicz, their 1A goalie and top scorer, due to COVID protocol. As of this writing, the two are now in Pittsburgh, quarantined until midnight, and still have to test negative tomorrow to be cleared to play.

Regardless of this, head coach Greg Carvel hadn’t decided on their being in the lineup yet.

“Every team in the NCHC, teams that made the tournament are all really strong hockey teams,” said Carvel. “St. Cloud has earned its way into the Championship game, so we know they are going to be a tough team to beat.”

“It should be a really good hockey game. Two really good teams playing well. I’m looking forward to it.”

The Minutemen are playing with determination. It starts with Bobby Trivigno. He was a force on Thursday, especially in overtime, and his efforts led to Garrett Wait‘s game-winning goal. He’s the little engine that could and he powers UMass. He missed the championship game two years ago. That has to be a motivating factor for his success.

Jason Scales – Well, I did go two-for-two on Thursday. I like my chances with this pick as well. Massachusetts captures its first National Championship. After watching the two team’s press conferences, I think that the Minutemen are still all business. SCSU is still in that “happy-to-be-here” phase. I think the Minutemen have learned from their experience from two years ago when they were in the Huskies position. Not knowing the situation with Lindberg or Murray being the starter doesn’t phase me. I guessed the score right on the UMD game, I think I got it again. UMass 4-2.

This is a toss-up. These teams play quite similarly. The offense is driven by active and quality skating defensemen, while the forwards have a healthy mix of skill and grit. These teams almost look like color swaps of each other. For the first time in program history, experience is certainly a benefit for UMass. The Minutemen have been to the Frozen Four before, and have recently won both a conference regular-season and a postseason championship. St. Cloud is new to the National Championship game. Both teams have proven their abilities in this tournament. I could see either team winning. But because UMass beat the two-time reigning National Champion Duluth Bulldogs without Filip Lindberg and Carson Gicewicz and will be getting both back for the National Title Game, I’m taking the now full-strength Minutemen in a close game.

Eric Burton – College hockey fans we’ve made it. Tonight, we’re down to two teams. This will be the last college hockey game till October, and the Huskies are going to carry the banner for the NCHC and win their first NCAA title. The NCHC is by far the best conference in college hockey, the St. Cloud State Huskies are battle-tested and ready to face whatever challenges that lie ahead. The UMass Minutemen are the only thing that standing in the way of the NCHC winning a fifth NCAA Championship in a row. Conference pride is on the line.

During the semi-final game, UMass played without four players that missed due to Covid-19 contact tracing protocols. On Friday, UMass received some good news. On Friday, three of those players, Henry Graham, Carson Gicewicz, and Filip Lindberg jumped in a car and traveled to Pittsburgh to join their teammates. It’s not going to be enough, the Huskies are finally going to break through and beat UMass 5-3.