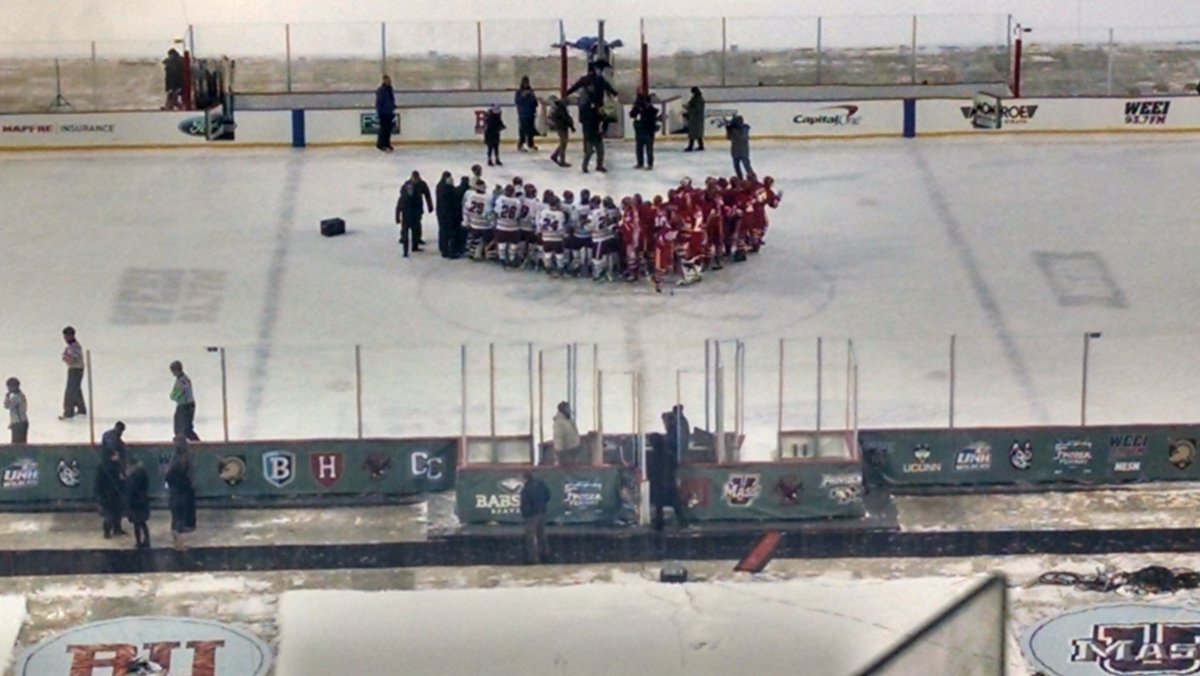 In their third ever outdoor game, the Boston University Terriers topped the UMass Minutemen 5-2 at Frozen Fenway. Led by three combined goals from Boston Bruins prospects, it was a two goal effort in the third and final frame that led to the victory.

Led by a two goal effort from sophomore assistant captain Jakob Forsbacka-Karlsson and 26 saves from Jake Oettinger, the Terriers improved to 12-5-2 with a 5-2-2 record in conference play. The teams avoided a potential sun delay and played through a combination of shadows and glare in the opening frame.

The scoring was started with seconds left in the first period when an individual effort from Forsbacka-Karlsson along the wall and towards the crease rewarded the Terriers with a 1-0 lead.

Forsbacka-Karlsson netted his fifth goal in two games in the second period to double the Terrier lead. Fellow Bruins prospect Charlie McAvoy lit the lamp himself on a rebound at the top of the far circle for a power play goal.

UMass scored for the first time with less than four minutes to go in the second frame when freshman Griff Jeszka scored his team leading sixth goal. The Minutemen kept momentum a little less than halfway through the third period when Ray Pigozzi tallied a shorthanded goal.

The Terriers wouldn’t lose control, however, as freshman defender Chad Krys sent an aimless backhand shot on crease that got past freshman goalie Ryan Wischow. That opened the floodgates for another goal as freshman Gabriel Chabot tallied for the second time this season. This time, it was off a big rebound from Wischow off a Nick Roberto shot from the point.

With the goalie pulled, Steven Iacobellis got UMass on the board to give them a three goal total, but it wouldn’t be enough as the Terriers pulled out the 5-3 victory. It is BU’s second win back from the winter break following an OT victory against Union on Thursday night, a game where Forsbacka-Karlsson netted a hat trick.

It was BU’s first game since the World Junior Championships, where six Terriers, including two-goal scorer Kieffer Bellows, won the gold medal with the USA. That game was also Thursday night, and there’s no doubt the Fenway event’s postponement to Sunday probably gave BU fresher legs.

The Terriers are back in action again on Friday night for the start of a home and home series with Boston College.