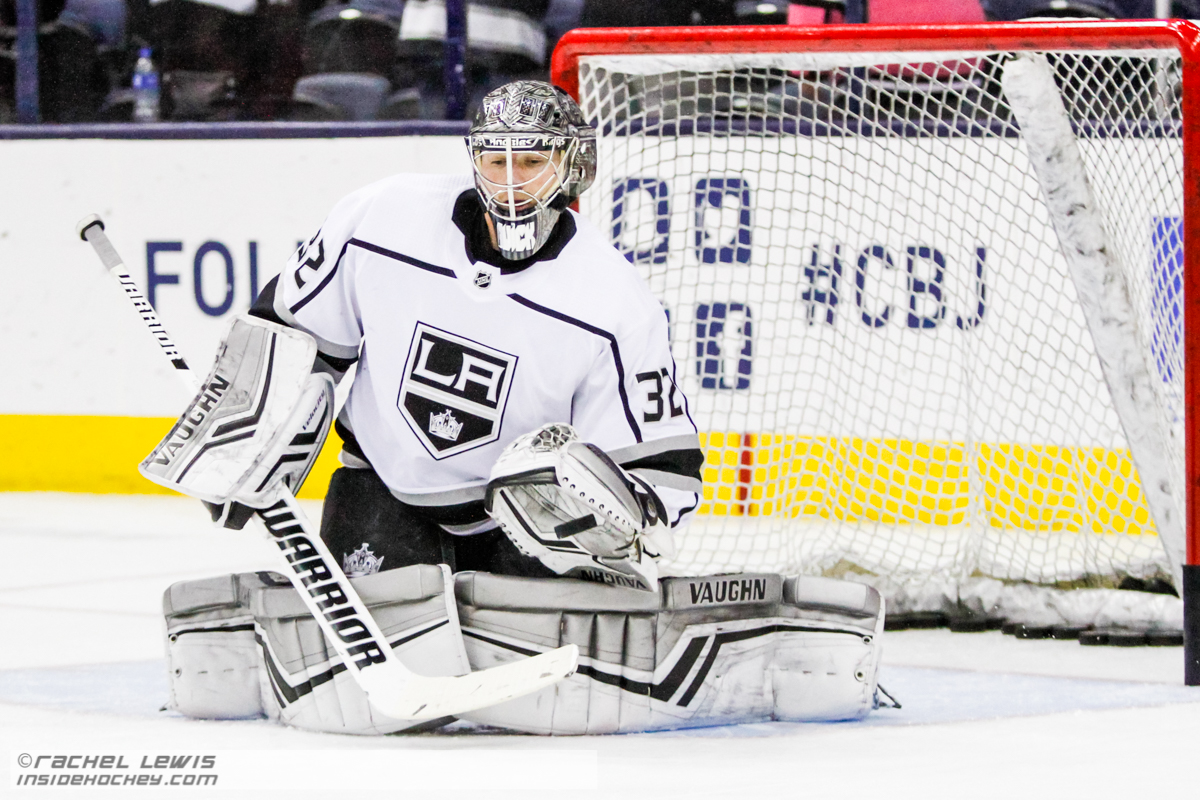 Jonathan Quick (LA - 32) makes a save during warmups.

Big save Dave. Forget that guy. He’s way up  there in Toronto.  What about Big Save Jonathan? Quick, I’m talking about, a one-man show in Anaheim with his Kings playing there Friday night. The shots were terribly lopsided, and the chances too (11-2 in period two alone), but Quick held in. Too bad that the team made him wait so long to get some goal support. More on that as I go on.

The game was 1-0 for Anaheim after a period, on a play where Trevor Zegras, newly converted to a center, won a draw back and then chased the puck so he was in the lane when Haydn Fleury launched one from the defence. It got by Quick, who had a defenseman of his own  standing in his way. Zegras was 5 for 8 in faceoff wins through two periods, and six of ten through three. He also laced a couple of shots towards the net, but recorded four missed shots and three on net when the  night  was done.

Period two had no scoring, but that’s when Quick exploded with great saves. At one point, the Ducks had a PP which featured five shots. Overall, Quick stopped 19 pucks, to John Gibson’s 6, in the period.  The ending total of shots, not to say saves, was 34-25 in the Ducks’ favor.

Here are some P2 chances: Zegras put a puck over to Troy Terry, and Quick dove over to stop it. Comtois had a chance on a scramble, and Quick ended up lying on his belly in front of the net. He later took a wrister through traffic. Stopped. Rakell took a shot that was redirected by a Kings’ player’s stick and Quick got an arm on it. Jones took a shot for a glove save. Rakell saw a shot stopped and on the rebound put it low. Quick got a toe over there.

Exciting stuff, especially in a game where, to the point where the Kings weren’t going to win, meant nothing, because neither team is going to the playoffs. For the Kings, that’s only a mathematical uncertainty right now, albeit one kept alive by  excellent goaltending and a couple of sticks that finally  woke up.

Period three was not quite as crazy in terms of shots and chances, and the Kings took the momentum anyway. Around midway, they scored to tie the game 1-1. Moore passed to Vilardi, who did a backhand, between the legs pass across the slot to Lias Andersson, who buried the puck in an open net.

Shortly after that, Kempe and Vilardi rushed in tandem. It was to no avail, but the Kings were suddenly interested. And then Kopitar came from nowhere.

He got the puck all alone in the slot, deked to the right on his forehand, and put the puck in on the backhand with reach. 2-1, LA ahead, and there were 55.1 seconds to go.

How disappointing for the Ducks, and Dallas Eakins said so after the game. “On a night like tonight, we should have had run support. We should have had that for not only our goaltender, who played very, very well but our defense, who worked very, very hard, like it’s right through that lineup. You’re rolling in that third period, and it would be way better to be up by two or three than to be hanging on by  one.”

But hang on they did, just not long enough, and that’s thanks to one guy: number 32, Jonathan Quick. In fact, in the  last 30  seconds, with the Anaheim net empty, Quick did it once more, getting an arm out to deflect a one-time r by Zegras. Big save once more to finish it.

The win keeps the Kings’  hopes alive, barely. They and St. Louis. holding fourth now, each have eight games to go. The Kings are eight points behind. So if LA wins all their remaining games, the Blues have to win gain  eight points in eight games to make it to tie-breaker status.

The teams get together again tomorrow evening in Anaheim, and that will end the Freeway Faceoff for the year.

Goaltender Ryan Miller announced Thursday that he will be retiring after the season. More on him in a story  over the weekend.

Blake Lizotte of the Kings was not dressed due to a lower-body injury. Ryan Getzlaf of the Ducks was off on a rest day.