It was evident that the Calgary Flames and the Columbus Blue Jackets are both fighting for their playoff lives Wednesday night in Calgary. Both teams were strong defensively, and though the Flames started slow, falling behind 2-0 in the opening 10 minutes, it was the Jackets who finished slow, allowing two goals in the final 10 minutes and the eventual game winner in overtime.

Both the Flames and the Jackets are sitting precariously within their respective playoff pictures. The Blue Jackets occupy the first wild card spot in the Eastern conference and the Flames sit third in their division but are only 4 points away from the outside looking in. Of the 16 teams currently holding a playoff position, only the Blue Jackets and the Flames have negative goal differentials. 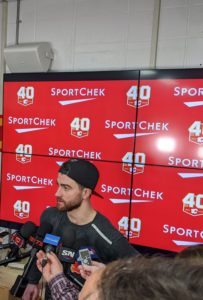 For the 10th time this season, the Flames managed a third period come-from-behind win. It was an important win in a few regards. It marked the beginning of a five-game homestand for the Flames and opening with a resilient win is a positive step in the right direction to move forward against two big divisional rivals in the Arizona Coyotes and Vegas Golden Knights this coming weekend.

More than opening the homestand with a win, however, was the fashion in which this comeback came. In games past, the Flames have squandered games away with sloppy play only to stage late-game heroics to salvage embarrassing losses. Wednesday night was different in that the Flames played a strong first two periods and were simply met by a good checking team in the Columbus Blue Jackets.

Captain Mark Giordano has nothing but praise for the Jackets effort, especially in the defensive zone where they blocked 22 shots.

“They are a really solid defensive team who plays structurally and plays really well. It’s a huge two points for us to get this homestand rolling on a positive note.”

The game bore little resemblance to a playoff atmosphere, as the teams play in different conferences and have no heated history, and that was probably a big part of the Flames ability to stick with it and not get frustrated. Consistency and patience are two big motifs of the Flames new coach Geoff Ward. Something to watch for in the coming weeks will be the Flames ability to handle the emotional rollercoaster that comes with rivalry games for important points.

Coach Geoff Ward likened the game to a good test moving forward for the rest of the season.

“This is what it’s going to be like in the playoffs and down the stretch into the playoffs. That’s what’s needed at this time of year. You need to have a present focus and find solutions for each other and stay with the process.”

On the other side, Blue Jackets coach John Tortorella commented after the game “I thought we played a pretty good defensive game but got stuck in our zone a couple of times. Not working them down. I don’t think we played bad in the third, but the bottom line is we need to develop a better forecheck.”

In other Pacific division action, the Arizona Coyotes beat the Vancouver Canucks to claim a crucial two points. The loss now puts the Canucks 3 points behind the Flames for third in the division with the Canucks holding two games at hand.

The Flames will get a heavy dose of playoff-type atmosphere in the coming weeks, playing 7 of their remaining 14 games against teams within 5 points of them in the standings. If they can play strong defensive hockey, the run before the playoffs will be a great warm-up for the spring.