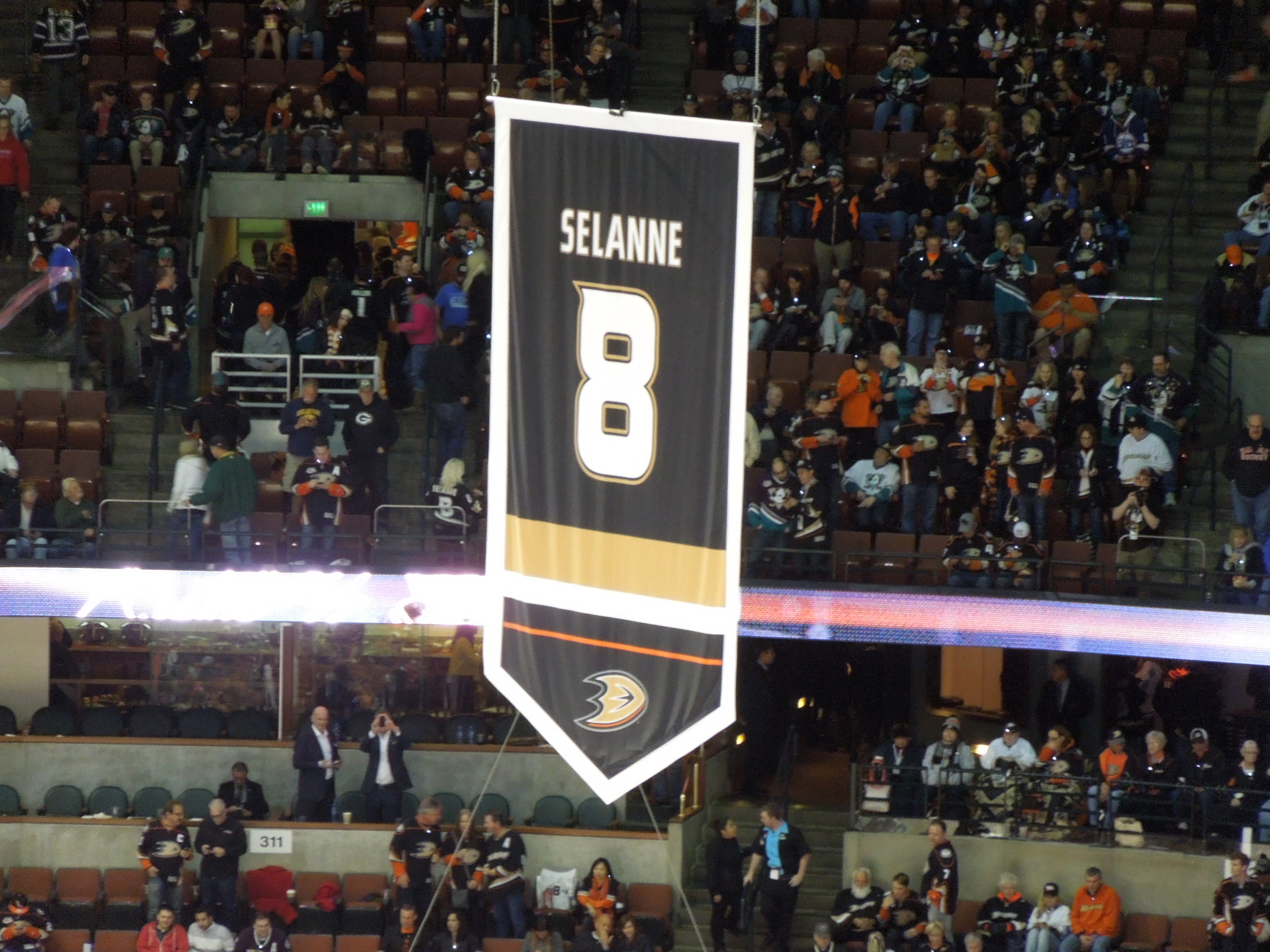 The Ducks retired Selanne’s number, as I earlier reported at IH, but here are some more details about the evening.

The event was attended by a number of dignitaries, including the Ducks’ owners, the Samuelis, and Gary Bettman, who was roundly booed whenever his name was announced. His rebuttal? “I’d get booed anytime to be part of this with Teemu.” What I would have said if I were he: “Sorry, can’t hear you. These eight million dollars the league is paying me are blocking up my ears.” Take your pick.

Other people on the center-ice stage included Chris Pronger, JS Giguere, Scott Niedermayer, and Steve Rucchin. All were roundly cheered.

On the family side, Teemu’s parents and immediate family were there, along with an empty chair for his former agent, who has passed away but who was highly influential in the player’s career, as he said in comments in the time between periods one and two. During the ceremony, he said the man was “my North American father.”

The banner-raising ceremony was much longer than the hour scheduled. In fact, it pushed past an hour and a half, putting the game start time behind considerably. Perhaps that’s why the Ducks came out flat, getting behind 3-1 by the end of the first period. But that’s not the point here. (They ended up winning in a shootout, 5-4, in case you haven’t heard.)

The ceremony proceeded with video highlights of Selanne’s career, followed by his entrance. There was a long live video feed of him coming into the arena, down a hallway festooned with fans who slapped his hand. Then he came into the rink. His various trophies were introduced by announcer Brian Hayward, and people made speeches, concluding with Selanne himself. Here are some highlights:

Jari Kurri said, “I hope you’ll be back involved with hockey somehow, some way, soon.”

Giguere commented that Selanne had a muffin for a shot, goalie-speak for a soft shot. Thus, he said, “I’d like to know, Teemu, how did you fool so many goalies for so many years?”

Then there was a video presentation where various players, including Randy Carlyle (player and coach), Luc Robitaille, Scott Niedermayer, Selanne himself, and Paul Kariya talked. Also Getzlaf and Perry.

Selanne named his goal in game five of the Detroit series the year the Ducks won the Cup, an OT winner, as his favorite moment as a player, other, of course, than winning the Cup itself.

One key line in the video: “Nothing lasts forever, but for Anaheim, the story of Teemu Selanne will.” And Selanne added to that, “I’m so lucky and thankful for being able to experience all of that.” He also complimented the fans, thanking them last and looking over the capacity crowd to intone, “Winning the Cup was so special for me, but especially because we did it right here.”

The ceremony concluded, of course, with the banner being raised. Selanne, then his family, made their way down a thin carpet to a larger carpeted area emblazoned with his signature. They stood and watched while music played—quiet, dignified music—and the banner went up, rather too slowly, but with drama at least.

And then it was over, and the stage was disassembled so the players could take to the ice for warm-ups. They did so wearing every one of the Ducks’ prior sweaters, with either 8 or in one case 13, as the number. The Jets all wore #13. That was Selanne’s number there, because #8 was taken.

By whom? The coach who would eventually share the Cup with the Finnish Flash, Randy Carlyle was a defenseman in Winnipeg at the time Selanne was a rookie.

Between periods one and two, a somewhat tired-looking Teemu Selanne came to address the media once more. He started with a joke, but kind of went more for clichés as the questions wore on, which is not his usual way. One thing reporters could normally count on during his playing days was that while everyone else said the same old, same old, he would come up with interesting formulations to express his ideas about the game.

Perhaps the clue as to his tiredness was that he said that over the next couple of days, he would just like to rest a little bit. The weekend, which stretched to four days of events, had been a lot. And the emotion of the night was great, too. He said that as he went up the stairs (to the platform), he felt the overwhelming nature of the emotion of the evening. Perhaps, to read a little further into that, it was the weight of realization that his career was really well and truly over.

Someone referenced the “one more year” chant that had always been the Anaheim crowd’s mantra over the past four or five years. The question that was asked of Selanne was whether he had really, completely, retired. Specifically, had he signed the retirement papers? He deferred, saying “Let’s not get to that,” but he didn’t actually answer the question.

He did, however, talk about what he might do next. He has a couple of business interests, including a high-end steakhouse and a clothing line, which he said he works at mostly for fun (ie. I’ve got lots of money, thank you), but that he knew one thing for sure—he wouldn’t just be sitting around. “I’m not the kind of person to just sit and watch TV. I need to be out, everyday, doing something,” he said.

But he also let it come out that he plans to be involved in hockey some way in the future. He said neither “Ducks” nor “Hockey Finland,” leaving us (that includes you) to guess what the nature of that involvement might be. But imagine that if there’s another NHL Olympics, or perhaps even if there’s not, he might be part of the Finnish executive group.

What you’ve got to balance in any guesstimation as to what his activities might be is that he has four kids ranging down to the daughter he called “my princess” during his retirement ceremony, who is about six, and they, while Finnish-speaking and acculturated, are also people who have lives in Orange County, California. They’re not likely to follow dad anywhere for work in the near future. So whatever job the Finnish Flash takes will, of nature, be something he can pursue without them, but also without disrupting their lives by his absence.