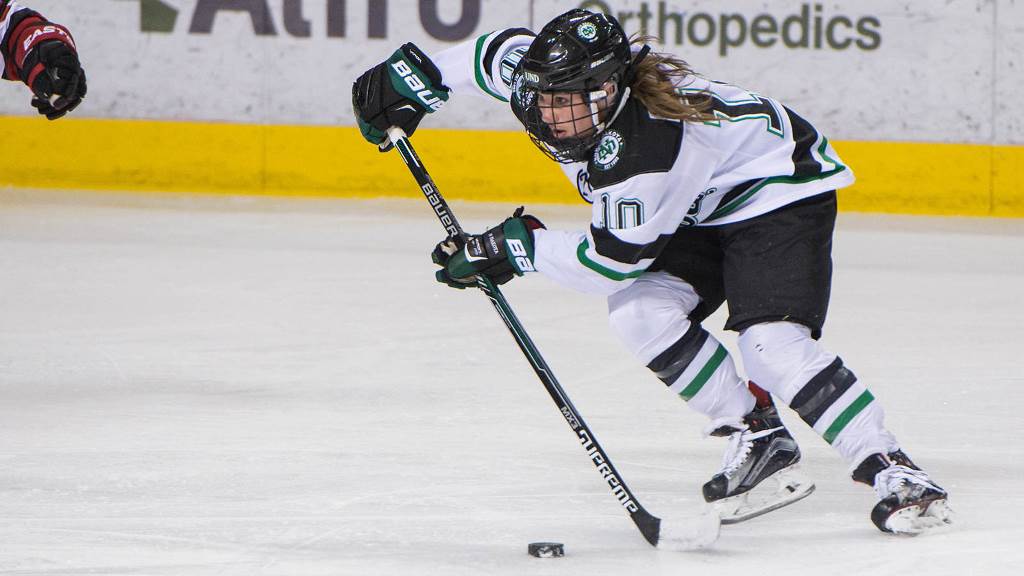 Friday night, the University of North Dakota women’s team played their first home game of the 2016-17 season. When it was all said and done, the hometown team gave their fans a lot to cheer about. It was a fabulous home opener for the Fighting Hawks.

From the drop of the first puck, the new look Hawks came out flying and took the game to Minnesota State. The Mavericks had no answer to the Fighting Hawks speed or their forecheck. The outcome of the game was never in doubt as the Fighting Hawks rolled four lines and controlled the pace of the game for 60 minutes. In the end, UND played an almost flawless game racking up six goals to shutout the Mavericks 6-0.

Through the first four games of the season, the Fighting Hawks had struggled to score goals, but that wasn’t the case tonight. Three Hawks players (Abbey Stanley, Emma Nuutinen, and Rebekah Kolstad) scored their first goal of their career.

Two players (Nuutinen and Charly Dahlquist) had two-goal games. All around, it was a good night for the young  Fighting Hawks players as they kept their Director of Hockey Operations Kevin Vaughen busying saving their game pucks for their first career goals. Honestly, I don’t think that will bother UND head coach Brian Idalski all that much.

“Budget-wise, are going to have to get some more game pucks,” coach Idalski said. “That was terrific, a couple of kids needed it. They’d been close at the beginning at the season. We just felt if they got one they’d relax and things would start going a littler easier for them.”

One of the stories of the game was the play of center Charly Dahlquist. The sophomore from Eden Prairie, MN, was relentless on the forecheck and she was rewarded for her efforts on the score sheet. Her efforts didn’t go unnoticed by her head coach, either.

“Those are some of the things that we saw and that she’s capable of,” coach Idalski said. “She keeps getting more and more confidence. I think that line has good chemistry and plays well together. (I am) super excited for her.”

After the game, Dahlquist was pleased with her team’s play.

“I thought it was really fun,” Dahlquist said. “The six goals we scored was definitely a fun time. We need to bring it back…how we played tonight. Tomorrow, I would like to see just as many goals and for Lexie (Shaw) to get another shutout.”

UND GOAL! All we can say is vau on this goal by Emma Nuutinen to make it 6-0 Fighting Hawks. pic.twitter.com/oNELmFwm6a

Held scoreless in her first two games, freshman forward Emma Nuutinen showed us a glimpse of the things to come. The Finnish Olympian scored the first two goals of her career and showed some nifty moves on her second marker.

“We haven’t seen that in a while,” Idalski said. “There’s a reason why she was in the Olympics, she can play. She looks fantastic and ready to go and she’s just going to get better as she gains more confidence gets comfortable with the language and everything else.”

In the goaltending department, senior goalie Lexie Shaw stopped all 17 shots that she faced to record the shutout. That’s her second shutout of the season and third shutout of her career.