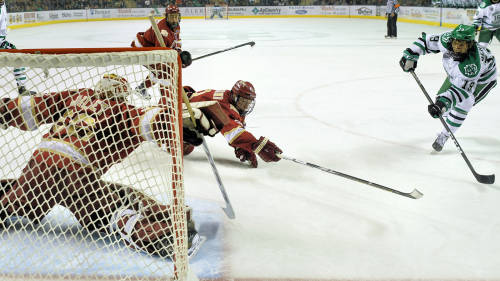 The University of North Dakota Fighting Hawks hockey team is in a bit of a funk. While the Fighting Hawks haven’t played all that bad they’ve haven’t done enough to push themselves over the top. Over the past three weeks, they’ve gone winless in six games 0-4-2 (.166). During those six games, the Hawks have been outscored 10-19. Obviously, it’s very hard to win hockey games with goal differentials like that. It’s a matter of finishing your offensive opportunities and executing the game plan and UND is having trouble cashing in on their opportunities.

“We hit a couple of pipes there at the end,” head coach Brad Berry said. “There are no excuses on our part. We have to be better. We have to be sharper.

“Again, we talk about finishing plays. Those plays start in our end of the rink executing passes and making plays where you get into the other team’s end of the ice. We have to focus on the execution part before we even get into their end.”

It all boils down to the Fighting Hawks not getting any puck luck, but after losing Saturday’s game 3-2 to the Denver Pioneers. No one is making excuses.

“We mired in a time right now where we’re not getting a lot of success in the win category,” Berry said. “Again, we’re going come back to work this week, we’re going to have to get prepared and be ready to go again. It doesn’t get any easier.”

In the game of hockey, the difference between winning and losing can be a matter of inches. That was apparent late in the third period of Saturday’s game when Gersich had the game-winning goal on his tape and rang the puck of the crossbar.

“That was a good play by Wooly (Christian Wolanin), obviously he kind of sucked everyone over to him and then he slid it over to me and it (the puck) went off of the crossbar, or whatever. No excuses, it should’ve gone in.”

Truth be told, the Fighting Hawks are very close to breaking out of their funk and they’re not playing that bad. They’re getting chances, but they’re not capitalizing on their opportunities.

During Saturday’s game, the Hawks opened the scoring at the 00:33 mark of the first period when Shane Gersich scored the first of his two goals. The lead would be short-lived, four and a half minutes later Denver forward Liam Finlay would tie the game with a power-play goal. The Pioneers would score again four minutes later to give the Pioneers their first lead of the game.

In the second period, the Fighting Hawks would tie the game with another goal from Gersich. Only to cough up the lead again when Denver’s Henrik Borgstrom scored his sixth goal of the season from the top of the faceoff circle. With his two goals on Saturday, Gersich is now UND’s leading scorer with six goals and 14 points.

During the past three games, the problem hasn’t goaltending, Cam Johnson is 0-2-1, 1.99 GAA and .912 save percentage. If a hockey team isn’t scoring goals, the goaltender has to play almost flawless hockey to give your team a chance to win. In most cases, scoring two goals or less isn’t going to win many games. It doesn’t give a hockey team much room for error.