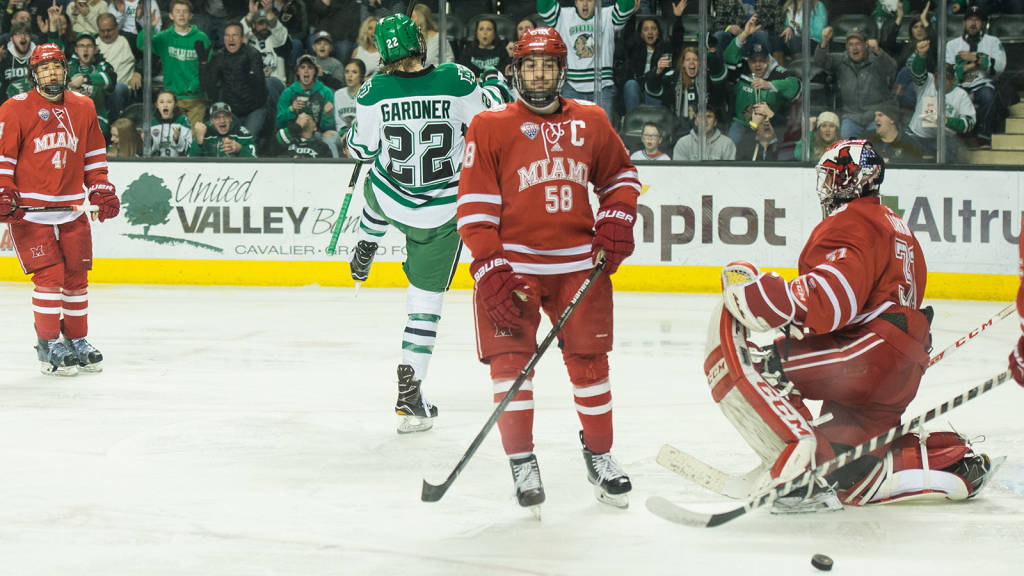 Grand Forks, ND – Historically, the Ralph Engelstad Arena is usually a tough place to play for the visiting teams. Lately, it’s been a house of horrors for the University of North Dakota hockey team. In the past seven games, UND is 1-4-2 (.285). That record doesn’t sit well with the UND hockey team or with the hometown fans.

“Coming into the second half, you can’t lay off a period,” freshman forward Dixon Bowen said. “Teams are going to capitalize if we take the foot off the pedal.”

Deja Vu. The start to Saturday’s game was eerily similar to Fridays’ game, the Fighting Hawks raced to a 3-1 lead, but this time they didn’t relinquish the lead.  In the first period, Dixon Bowen and Austin Poganski gave the Fighting Hawks a 2-1 lead going into the first intermission. In the second period, Rhett Gardner scored a shorthanded goal to give UND a 3-1 lead. With that goal, Gardner broke a 10-game goalless streak.

In the end, 3-1 was all the closer the RedHawks would get, UND wasn’t going to let this game slip away and they nailed down a much need win to remain in third place of the NCHC standings.

“I think we were stronger mentally and physically,” head coach Brad Berry said. We talked about it after the second period, about doing the right things and playing our game. We put the puck down below the goal line and we had sustained pressure for a lot of the third period, line after line. It’s a lot better than turning pucks over and playing in your end.

“We played simple, simple hockey. We didn’t try to make the perfect pass when there wasn’t a pass there. We chipped it out and skated on to it and we advanced pucks. Last night, we turned a few over. That’s a good team that has good sticks. They can knock pucks down and go the other way and when they do they get open looks like you saw on the first goal. We tried to advance pucks a little more tonight.”

Even while shorthanded, the Gardner is here to terminate some weeds. pic.twitter.com/8rXOFLHx8m

In hockey, the players have to have a short memory. On Saturday night, the final result was different. Instead of taking the foot off the gas, UND put the pedal to the metal and gutted out a 3-1 win. The hometown team spent most of the third period in the RedHawks end.

Next weekend, UND entertains the Minnesota-Duluth Bulldogs in an important two-game conference series. With the win, UND improves to (13-7-3, 6-5-1 NCHC).