Grand Forks, ND – Entering their National Collegiate Hockey Conference series against the University of Denver, the University of North Dakota hockey team was down three of their top players due to injury (Gabe Bast, Rhett Gardner, Nick Jones). On Saturday night, the Fighting Hawks added a fourth player due to a league-imposed suspension (Cole Smith).

This weekend, UND wasn’t playing some run of the mill team minus key players. They were playing the highly talented, league-leading Denver Pioneers.

Back in November, during their first series in Denver, the Fighting Hawks gave up (4g-7a—11pts) to the Pioneers top-three players (Troy Terry, Dylan Gambrell, and Henrik Borgstrom). This weekend, it was a different story, the injury-depleted Hawks held Denver’s big three to (2g-2a—4pts). That’s a big accomplishment for any team on any given weekend.

After giving up six power play goals to the Minnesota-Duluth Bulldogs the weekend before, special teams were a focus all week long in practice for the Fighting Hawks. Against the Pioneers, UND gave up one power-play goal on eight opportunities.

“We had some matchups going into this weekend having last change,” head coach Brad Berry said. “I think it was key to having guys identifying their roles and identifying their top players on the ice. Not giving them a lot of time and space. Anytime you limit that team to 20 shots you’re doing something right.”

UND spent a lot of time working on their special teams and the players took it to heart.

“Last week it was tough, because you got a guy in coach (Dane) Jackson that puts his heart and soul into everything he does, for him to come and realize his PK didn’t do the job I know that’s tough on him and we held a lot of meetings for our power play and penalty this week,” defenseman Christian Wolanin said. “I think we were on the ice for 45 minutes on Tuesday sitting still and going through our systems all over again.

“And coach Jackson, like I said, works so hard making sure that we’re prepared as best as possible. In Duluth, I think it had nothing to do with coach Jackson preparing us. It was a lack of discipline, a lack of energy. This weekend we had a mentality that we weren’t going to get scored on (during) the power play. I think we did a good job battling and showing heart.” 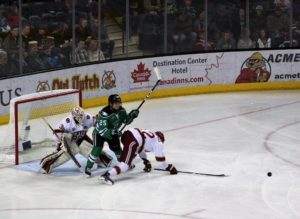 Entering the weekend, if you would have told me that the UND and DU would play a couple of ties, I would have told you that you’re crazy. Instead of crumbling in the face of diversity, the banged-up Hawks dug down and slugged out a couple of gutty efforts.

A grind it was. The two teams traded goals during the first two periods and then shut it down the rest of the way. The story of the day was the senior goaltenders. Senior goaltender Cam Johnson stopped 22-of-23 shots to earn the tie. Pioneers goaltender Tanner Jaillet was equal to the test stopping 21-of-22 shots.

“You always want to win, but I like the way we played this weekend,” Johnson said. “Denver, they’re a really good team. We had some guys that were banged up, so two ties for us, we’re not upset about the weekend, but we’re definitely not extremely happy about the weekend. Overall, it was a solid weekend for us.”