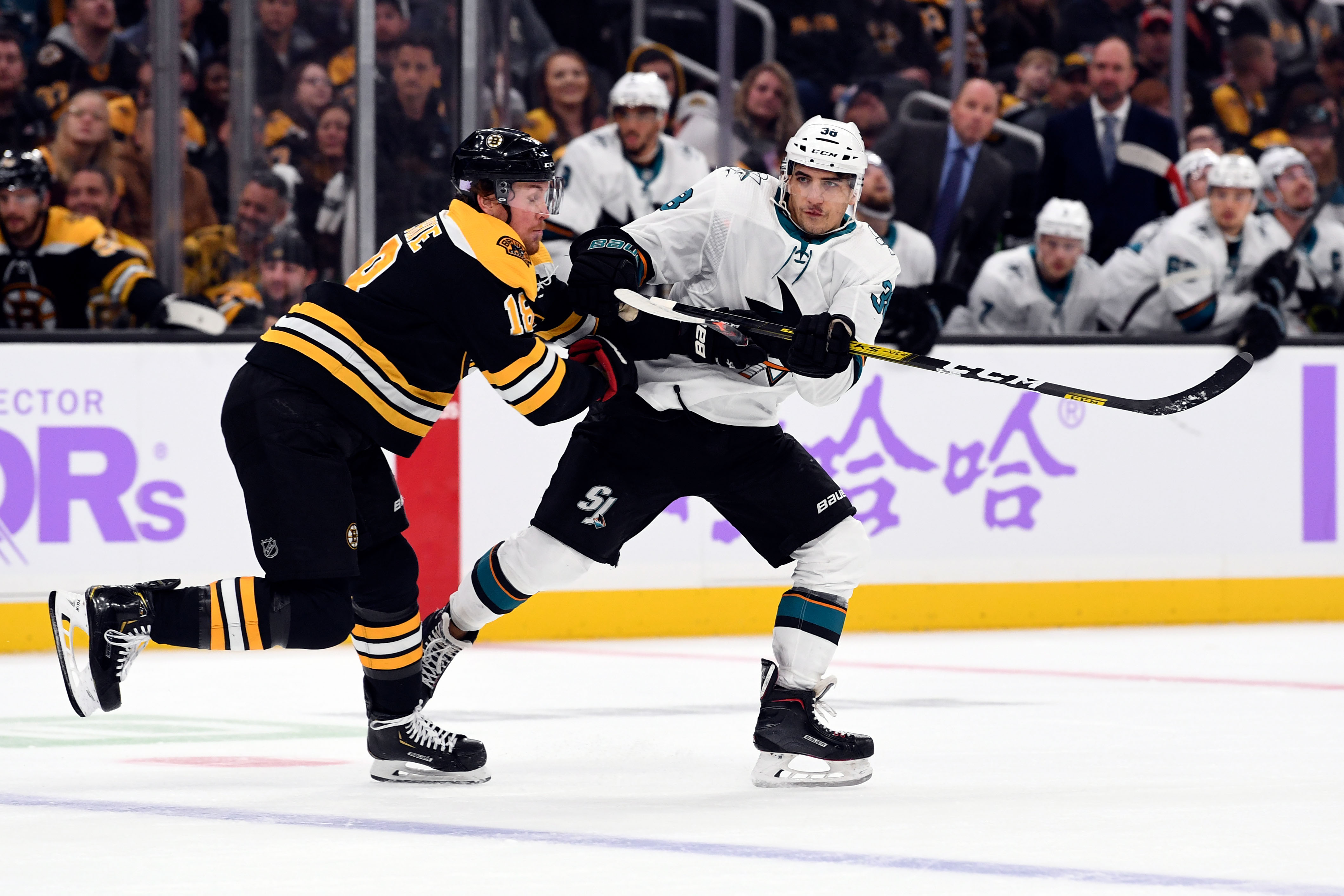 Boston, MA — The last half-year or so has been quite a whirlwind for Mario Ferraro. In April, the 21-year-old Toronto native was a sophomore on the University of Massachusetts Minutemen, a key contributor to his team’s run to the NCAA Finals against Minnesota Duluth. The Minutemen lost the title game 3-0. Come October, Ferraro was patrolling the blue line for the NHL’s San Jose Sharks franchise, alongside superstars Brent Burns and Erik Karlsson, each Norris Trophy winners for the NHL’s best defenseman.

The highs and lows of hockey life are quite amazing, to say the least.

Through the first 13 games of his fledgling professional career Ferraro has logged 194:00 minutes, averaging 15:32 a game. He has played in most facets of the game from five on five, four on four, and the penalty kill.

In his return to Massachusetts to take on the Boston Bruins, Ferraro played a solid game but ultimately the Sharks struggled to put up much of a fight against the league’s hottest team. The Bruins convincingly beat San Jose 5-1. For the San Jose it was their fifth and final game of their East Coast road trip.

The Sharks struggled on their trip going 1-3-1 and carry a 4-8-1 record overall. Not much has been going right for the Northern California team early, but Ferraro has been a bright spot in an otherwise dim first month.

“It’s good, I’ve really enjoyed it,” said Ferraro when asked about transitioning from the NCAA to NHL. “I’m super fortunate for the opportunity that I have here, given the opportunity to play alongside great players in this room. That’s something I am honored to say, that I’ve been able to play with legends. And learn from them. The experience has been surreal.”

It’s not just Karlsson and Burns, the Sharks roster is littered with legitimate NHL legends. 1997 number one and two overall picks Joe Thornton and Patrick Marleau still play the game at high levels, as well as talented players like Logan Couture and Tomas Hertl.

“I try to stay focused, and composed, and focus on improving. At the end of the day, I want to stay here, I want to be here (in the NHL) for as long as I can. In order to do that I have to take advantage of the time to get better.”

That was evident as Ferraro was the second player onto the ice for Tuesday’s morning skate at TD Garden. He kept to himself, working on his stick-handling in between drills, and fitting right in with the professional pace. 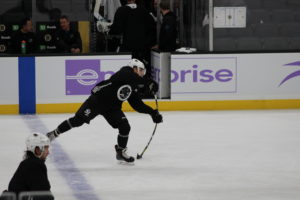 Sharks coach Pete DeBoer notices the work that Ferraro puts into his game. “Mario’s been great,” he said. “He’s been one of the bright spots for us. The kid came in, stepping right out of college, into this line-up. Honestly, on the list of guys that we have to work with after a game, based on mistakes and things he’s way down on the list for a young guy. Which is impressive. He goes out and gives you what he’s got, if he makes a mistake it’s being aggressive. He’s been excellent.”

In the game against Boston, Ferraro logged 17:42 minutes on 25 shifts. 3:49 of that was in the short-hand situation. Ferraro blocked one shot and successfully defended a three on one situation against Brad Marchand, David Pastrnak, and Jake DeBrusk. Pastrnak and Marchand are two of the NHL’s hottest players. 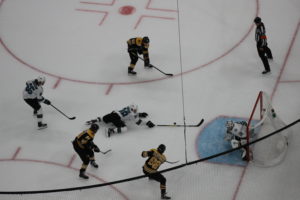 At Massachusetts, teammate Cale Makar received most of the press and accolades while Ferraro quietly anchored the Minutemen defense. It’s no surprise to see that the second-round pick, 49th overall, has been a “steady Eddie” in the pro game.

When Ferraro arrived in Amherst, Greg Carvel had jettisoned most of the roster that he inherited. There were two seniors on the roster Ferraro’s freshman year, as a sophomore there were three. On the Sharks, Thornton and Marleau have been in the league since before Ferraro was born.

“You’d think it would be a huge transition,” said Ferraro of the difference in locker rooms. “You’re going from a locker room where the oldest guy is 24 and then you’re coming into a locker room and there’s a lot more grizzled players and guys that have experience. At the end of the day it’s still a hockey locker room, they may be older than I am but they still feel like they’re around the same age.”

“Because they are such great teammates, great people we get along pretty well both on and off the ice. That’s the kind of bond we share in this room. That’s the leadership they have to hopefully take us a long way here.”

“I’ve talked to Burnsie quite a bit,” said Ferraro when asked if anyone has taken him under their wing. “He’s given me a lot of advice, and pointers out there which I’m very grateful for. He’s not a coach, he’s not obligated to do those things, but he chooses to because he’s a leader and he’s a great player, and a great person. So I’ve learned stuff from him about getting pucks to the net, making plays quicker. At the NHL level, it’s a lot faster here so you have to be sharp on your stick, have quick feet, so he’s taught me a lot about that.”

Not a lot of rookies have the chance to pick the brains of one Norris winner. Ferraro is fortunate to have two to choose from. Karlsson spoke highly of Ferraro. “He’s been good,” said Karlsson. “”He’s young guy, he’s learning. It’s not an easy situation for him, he’s going to figure it out. He’ll be fine.”

Despite the Sharks lack of success so far, Ferraro has been enjoying his first extended road trip while getting used to the NHL travel. “It’s a grind, it’s teaching me what the NHL is all about. Playing a game, getting out, and getting ready for the next one. It’s been a grind but it’s been a lot of fun. You’re thankful for these road trips to be able to bond with the guys. Its been an adjustment, it’s different from what I had last year. I’ve already played half the season of college, but’s it’s fun.”

The Sharks take on the Winnipeg Jets on Friday night in San Jose. Puck drop is 10:30 pm EST.