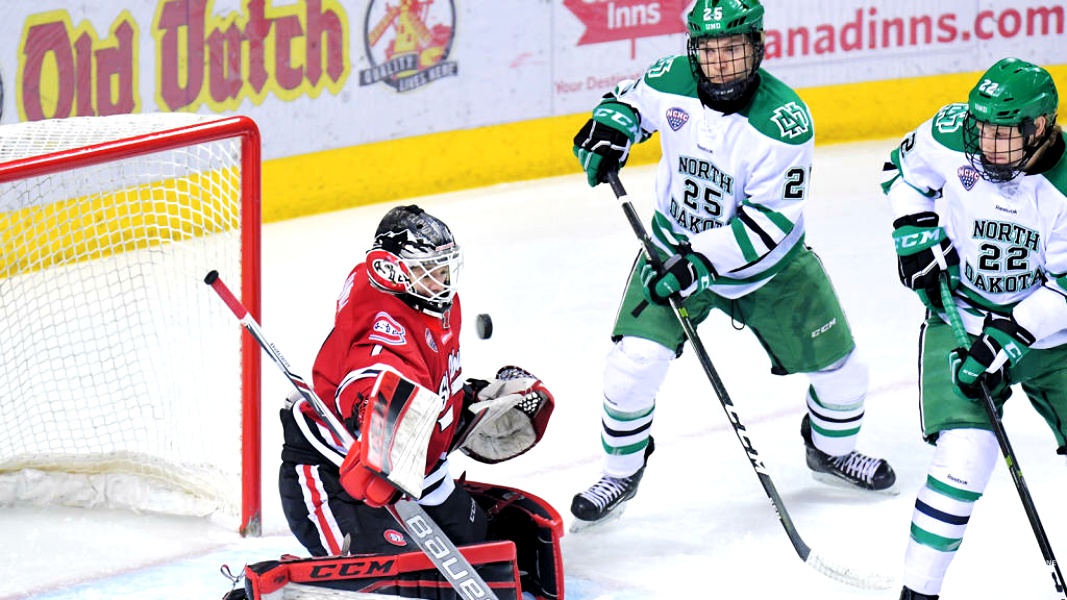 The far north country of North Dakota has seen its fair share of excellent hockey. This weekend, four teams will travel to Scheels Arena in Fargo to compete for a spot in the Frozen Four. Let’s take a look at the teams and how they matchup against each other for a trip to Chicago.

While not the biggest names in collegiate hockey, these teams matchup well and will give a great performance in the Regional opener. Both teams have potent offenses and good goaltending that got them here, but this promises to be a shootout, similarly to the Union vs Penn State game in Cincinnati.

Ohio State is the highest scoring team in NCAA Hockey, topping the 400 mark in points and leading the country in both goals and assists as a team. They can light up any defense for a big game. Their big wins include beating Denver in the Mile High City, topping Minnesota 8-3 in Minneapolis, and beating Wisconsin in overtime in Madison Square Garden. It took a phenomenal performance by Wisconsin to knock out the Buckeyes in the Big 10 Championship game. The Buckeyes boast three forty point scorers and one 50 point scorer in Mason Jobst.

They can turn to Nick Schilkey, David Gust, and Dakota Johnson if they need more offense than their top man. Ohio state flipped between their goalies this season before settling on Matt Tomkins for the job. Tomkins ended with the best GAA in the Big 10 and the fourth best Save percentage in the conference. They look to their offense to win games and hope their defense can hold up.

Duluth is not as potent, but they can keep up in scoring. Alex Iafallo leads the Bulldogs in scoring with 41 points, and he has three teammates with 30 or more points this season. Adam Johnson and Joey Anderson are the following scorers and can give some physical play that Ohio State might struggle with.

The Bulldogs also play much better defense than the Buckeyes, with the 11th best scoring defense in the country. Brenden Kotyk, Neal Pionk, and Willie Raskob anchor the defense for Duluth and can beat up any offense. Duluth also has a better goaltender than Ohio State, with freshman Hunter Miska finishing the season with the second-best GAA and third-best save percentage in the NCHC, both of which are better than Tomkins this season.

Ohio State can score and make life difficult for the Bulldogs. However, they do not have the defense needed to win a championship and Duluth does. Duluth can score on the Buckeyes, especially since Ohio State has by far the worst penalty kill of any NCAA Tournament team. Duluth will win this match up.

Of all the matchups in the tournament, few are as steeped in history, painted by recent meetings, confusing to pick because of inconsistent play despite good talent, and as affected by location. Fargo is an hour and a half ride up I-29 from Grand Forks while Boston is a day’s plane ride away from the Roughrider State. That means North Dakota has the best home ice advantage of any team playing close to their home in this tournament. They will need their fans for the game and they’ll need to play their best game to beat the talented Terriers.

BU tied for the Hockey East Conference championship in the regular season but still underachieved. Painful losses to Merrimack, Lowell, and Notre Dame all late in the season hurt them and BU had plenty of focus lapses that showed up at the worst times, namely in the Beanpot Final against Harvard and the Hockey East Semi-Final against Boston College.

The Terriers have the talent to win the national championship. Jake Oettinger ended the season as the best goaltender in the Hockey East, with the lowest GAA at 2.09, the second highest save percentage, and the biggest reason BU’s defense held off opponents. Doyle Somerby is a heavy hitter, Dante Fabbro, and Charlie McAvoy have the speed, but Oettinger was the biggest reason BU stayed competitive defensively. They finished tenth in the country in goals allowed per game and the fourth-best penalty kill in the country. It also helps that they have a potent offense. Kieffer Bellows came on late in the season, Jordan Greenway provides the physicality the team needs, and Clayton Keller led the way in scoring for BU while tying the school record for longest point streak. Despite that talent, they fell short in both their tournaments this season and barely tied for the Regular Season Hockey East Crown. They’ve got the talent but haven’t played consistently this season.

North Dakota has sung the same song for much of the season too. They boast four 30 point scorers with Shane Gersich, Tyson Jost, Brock Boeser and Tucker Poolman hitting that mark. NDU can also look to Austin Poganski and Rhett Gardner to lift the offense if the top unit slumps. They’ve got the defense that can hold up too, with Colton Poolman and Gage Ausmus dishing out hard hits. Their goaltending is not sterling, but it is very good. Junior Cam Johnson finished with the third best GAA in the NCHC, and led his team to the conference championship game.

The Fighting Hawks disappointed their fans with hard losses in January to Western Michigan, St. Cloud State, and Omaha. They righted their ship and went on a run in the NCHC tournament, beating top seed Denver in a narrow game before taking Minnesota Duluth to the limit in the Conference Championship game, falling just short in the end. They are playing good hockey to end the season and have some momentum going into the tournament.

BU and North Dakota have had similarly frustrating seasons, but are in different places right now. North Dakota is close to home with a chance to defend their National Championship after a strong end to the season. BU is sputtering near the finish line and has to travel to a hostile environment to try and make it back to the Frozen Four.

Ultimately, I’d give the nod to BU. After their controversial loss to BC, everyone around the Terriers was mad about the loss and intended to play the NCAA Tournament with a chip on their shoulder. A mad BU team is North Dakota’s worst nightmare. I also think Oettinger is a better goalie than Cam Johnson. Plus, Tucker Poolman will not be 100% for the Hawks if he plays at all.

In the hypothetical matchup between Duluth and BU, I think BU has more offensive depth and better goaltending. Duluth could absolutely keep pace and make life hard for BU, but I think BU would win the matchup riding Oettinger into the Frozen Four.