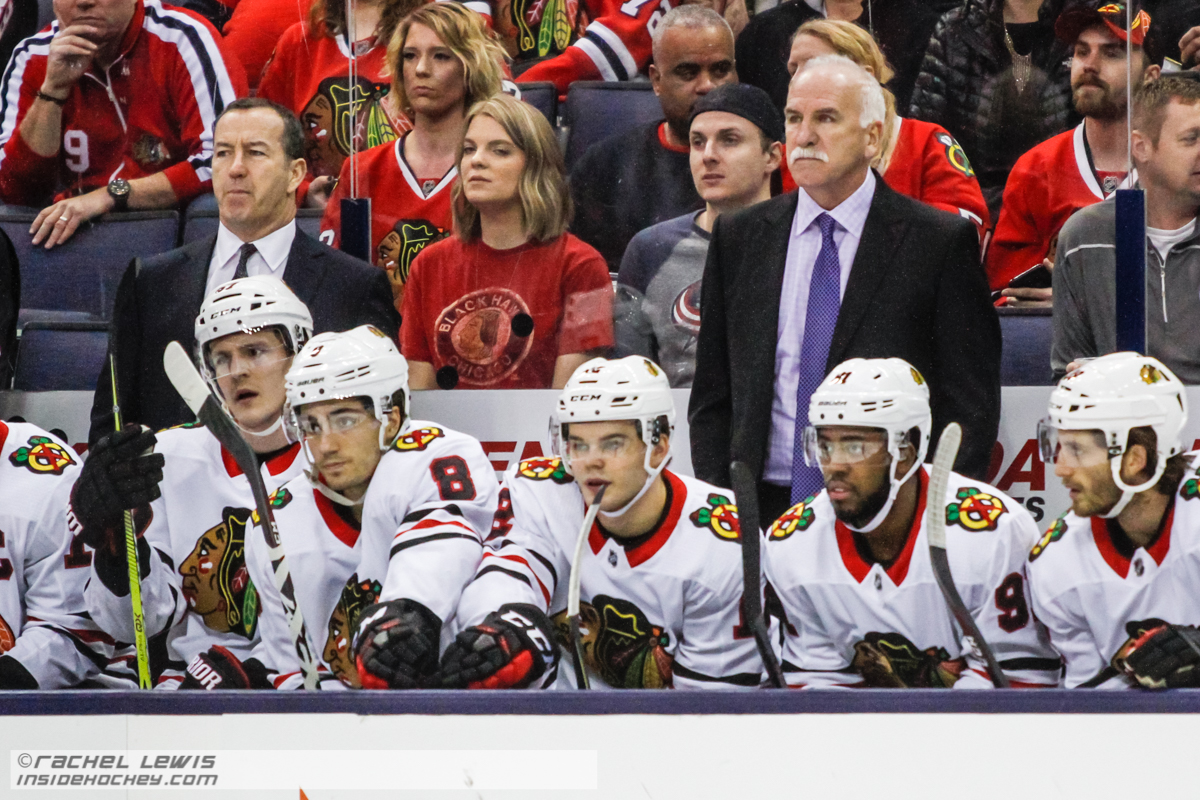 The firing of Joel Quenneville by the Chicago Blackhawks ends an era for the Windy City franchise. Until now Coach Q was the greatest active NHL coach and was the fourth greatest NHL coach all-time in the eyes of my rating system featured in my book Bench Bosses: the NHL’s Coaching Elite. He was also the greatest NHL coach of the 2010s thanks to his three Stanley Cup wins in 2009-10, 2012-13, and 2014-15 but immediately after the third Cup win cracks began to form in the once mighty Blackhawks edifice. Two first round losses in 2015-16 and 2016-17 (the latter a humiliating sweep at the hands of Nashville) marked the start of the decline and fall of the Chicago dynasty. Those losses compounded by Hawks GM Stan Bowman’s selling off of the Black Hawks’ valuable support players as a means of clearing cap space has declawed the Hawks and grounded them in flight. Last year’s last-place finish (the first ever in Quenneville’s glorious coaching career) coupled with a .500% start to this season marked the final blow.

After eleven seasons what worked in the past suddenly stops working. Where once players’ ears perked up when the Coach Q’s whistle blew now remain sealed in wax. The fault was not Quenneville’s alone. Quenneville paid the price that all coaches have to pay when they lead a franchise in massive rebuilding mode. But in some ways leaving Chicago may not be a bad thing after all. Had he stayed his coaching value would have declined even further like it did in 2017-18 (where Quenneville’s coaching value fell from a +138 to a +131 according to my rating system). He turned 60 years old last September and his niche in the Hockey Hall of Fame as a builder is ready and waiting for him (should he choose retirement) but is he ready for retirement? Should he be put out to pasture?

There are still teams that need the type of championship coaching skills he needs to offer: St. Louis, Florida, Edmonton, Los Angeles, Buffalo, and Anaheim all fit the bill but of them all it is St. Louis that appeals to the mind right. Although they are in last place the Blues are still at the .500% level and are only six points behind the third-place Dallas Stars. St. Louis has the talent to do better but presently lacks the coach to bring that talent forth. Mike Yeo continues to underachieve like he did in Minnesota and if Blues GM Doug Armstrong wants to recover the season then hiring Joel Quenneville is a step in the right direction.

Coaching the Blues would offer Coach Q a lovely sense of serendipity to his long, illustrious coaching career. After all St. Louis was his first NHL head coaching gig. Quenneville coached more seasons, won more games and earned more playoff berths than any other Blues coach in their 50 season history.

And most important of all: St. Louis has the second longest Stanley Cup drought of all time and the Blues have not reached the Finals since 1969-70. Joel Quenneville achieved greatness when he snapped the Chicago Blackhawks’ 49 year Stanley Cup drought in 2009-10. If there is anyone who could lead the Blues back into the fray and possibly go for glory then it has to be Joel Quenneville. And for Joel Quenneville:  to leave NHL hockey on such a subdued note is not a fitting end for a coaching immortal like himself. He deserves a fighting chance to reaffirm his coaching genius and to end his career on more glorious terms.