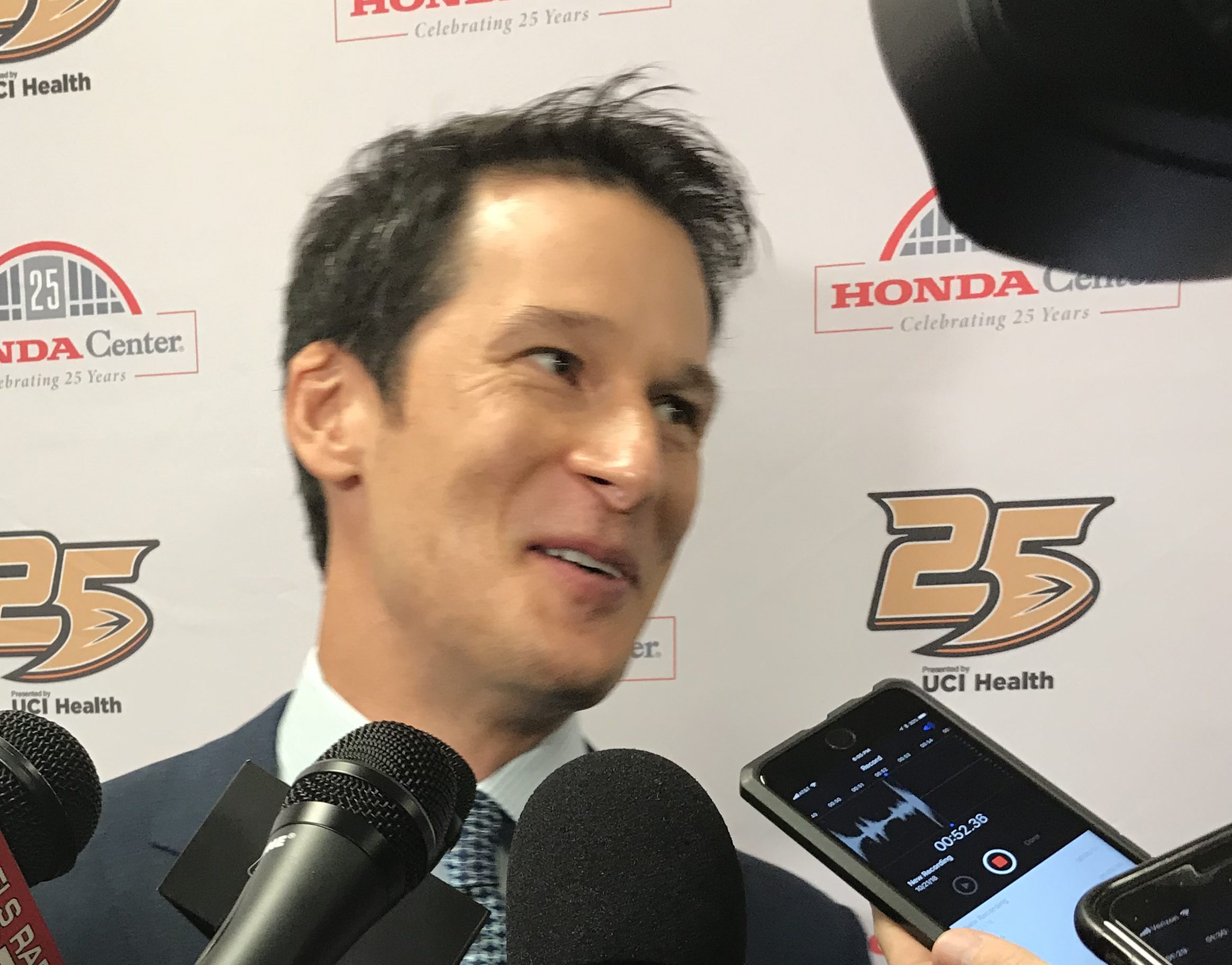 Enjoy Your Own Way

Two sweaters now hang in the rafters at Honda Center in Anaheim. One belongs to a beloved son who scored 457 goals with the team and leads them in most meaningful statistical categories. The other one belongs to a prodigal who has recently returned and who never quite achieved superstar status but did lead the team to many of its firsts.

He was the club’s first draftee, fourth overall in the 1993 draft. He was the first captain to take the Mighty Ducks to the Stanley Cup final, ten years later. And he had the club’s first 50-goal season and its first 100-point season.

Along the way, he averaged more points per game than any other Ducks player, 1.10. He also won the Lady Byng Memorial Trophy twice and was on the All-Star team a handful of times.

But Paul Kariya never won anything that sounds like “champion” with the club at the NHL level, except some playoff series, including those in 1993 that led to the Finals loss in seven games. He did, however,  capture the 1993 NCAA Championship, a couple of Olympic medals including gold for Canada in 2002, and the World Championship gold in 1994.

And he scored the most memorable goal in Ducks history, albeit for something of the wrong reasons. It was the night a certain New Jersey defenseman levelled him with a hit that would now be suspension-worthy, rendering him unconscious. Kariya got off the ice and finished the game with a spectacular goal. The Ducks won, then lost in a 3-0 sag of an effort in game seven. JS Giguere won the Conn Smythe Trophy that year.

Nowadays, the Kariya “get off the mat” moment is not celebrated like before. Concussion. And Kariya had a handful of those in his career, leading to the end of his playing days, prematurely.

His Ducks career also ended prematurely, with him leaving the team in the summer of 2003 to reunite with Selanne, who had been gone for three years with the Sharks. It wasn’t so much that Kariya left as the way he did it, promising to take less money if the team did not tender him a qualifying offer, and then stealing off to the Avalanche with Selanne in tow, hoping to win a Stanley Cup. (The Avs were a powerhouse team back then, having won in 1996 and 2001.) That never yielded anything, and Kariya ended his career having played also with Nashville and St. Louis. He never returned to the Ducks.

And he didn’t come out when Selanne had his number retired in 2015, a point that Selanne made something of during his speech on Sunday afternoon, (ironically) thanking Paul for showing up for the ceremony that would elevate his number to the roof.

Selanne has buried the hatchet, if there was one to be buried. (He’s not to blame for Kariya’s unceremonious departure, after all, and he has the everlong devotion of Anaheim fans for helping them win the Stanley Cup in 2007 after Kariya was long forgotten.) Some fans have not.

The two players went into the Hall of Fame last year, together. Selanne was the one who publically celebrated that, though Kariya was with him in Anaheim for a ceremony after it happened. It was what started Kariya back into Ducks’ fans’ good graces. But some still hold a grudge. It extends to one person saying Sunday that the Cup of 2007 allowed him to forget Kariya, and that he didn’t care much to see him come out of his hiatus.

Kariya has long been known to be something of a recluse, chasing the waves in the summer off of his Dana Point home and chasing the snow in the winter up in BC, where he is from. Other than that, he has largely disappeared, as is the prerogative of a rich, young, athletic man. But still, he seems something of a lost soul at times, though these recent events, and his appearances to celebrate them, have somewhat mitigated that impression.

And in truth, it wouldn’t be incredibly surprising to see Kariya now fade back into the mist, his number a reminder of him, but to some, a reminder also of the bad times.

Maybe it’s time fans got over this. Most probably have. And it would be great to see things healed up and forgotten. What might be good would be to have him more a part of the local hockey scene. The new multi-pad arena needs a presence like that. The team could use his smiling face on TV once in a while. He was on the between-periods broadcast Sunday and looked pretty comfortable doing it.

Or maybe it’s just an accident that he lives here—this is where the waves are, after all—and he should just be left alone. No matter what the case, when he drives by the Honda Center, or shows up here for a concert, if he ever does, he can know that his name and the Ducks purple, green, and black hang in the rafters, “forever,” as several people noted Sunday afternoon, beside that of his spiritual brother Selanne’s. Hard to believe that their era is over, and long enough over to have yielded these tributes.

Good that they’re both young and healthy enough to enjoy it for many more years, whether publically as Selanne does or privately, as Kariya apparently will.