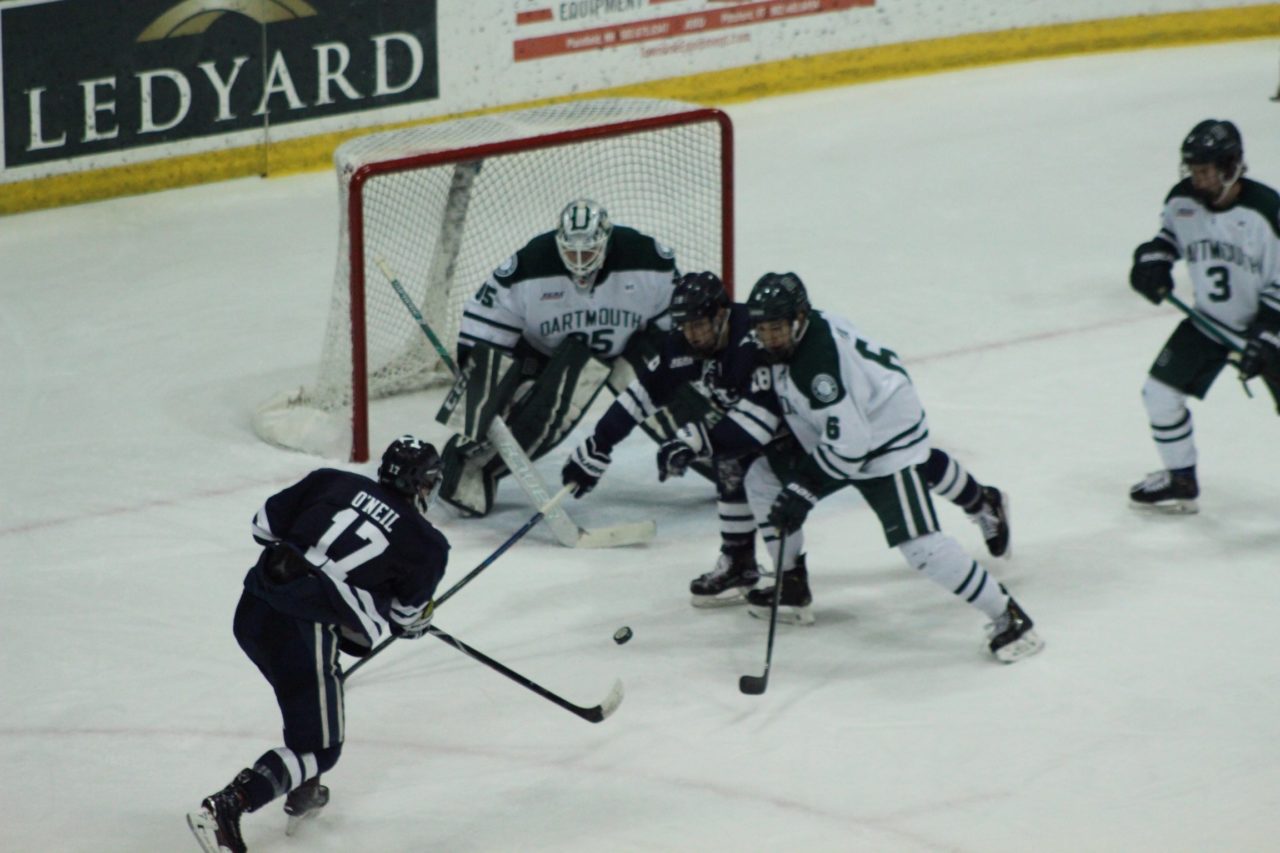 With trips to Lake Placid on the line these elite eight, which represent that top eight in the ECAC, are fighting for not just the Whitelaw Cup but for spots in the NCAA tournament as well. Quinnipiac, Cornell, Harvard, and Clarkson should make the big dance but nothing is guaranteed, except for the winner of the tournament (and QU).

The two traded 4-1 wins on the other’s sheet. Brown won on February 9, while Quinnipiac returned the favor on March 1. While the Bobcats were resting up, Brown swept Princeton 3-0 and 6-5 (3 OT) to earn their trip to Hamden, CT. Brown got solid contributions from up and down their roster. Alex Brink had four points in the two games including the unassisted game-winner in triple overtime to seal the deal for the Bears. Brady Schoo had three points, while numerous others had two. Gavin Nieto got the wins both nights in the Brown net.

Quinnipiac will be without Hobey Baker hopeful Chase Priskie for the first two games of this series. The senior defenseman was suspended for kicking a Yale player during the last regular season game. QU has a solid roster, will the absence of Priskie do that much damage to the Bobcats? Probably not. The Bobcats one-two punch of Keith Petruzzelli and Andrew Shortridge in goal should be enough to stifle Brown. The loss of Brandon Fortunato will be more significant and hurtful, though. QU is a lock to make the NCAA tournament at #5 in the pairwise.=

Chris Lynch- QU in 3. Brown has given Quinnipiac problems and feels confident after their weekend. They can give the Bobcats a fight. But the Bobcats do have more talent than the Bears.

The Big Red swept the season series against the Dutchmen, winning 4-0 away in Schenectady and 3-1 at home in Ithaca. The Dutchmen finished off Colgate in two to make their way to Cornell for this second round battle. Union’s top forwards came through to provide the offense. Cole Maier, Ryan Walker, Liam Morgan, and Brett Supinski have been the horses. They’ll need to get more from all of their line-up to get past Cornell. Darion Hanson played both games against Colgate, as well as both regular season contests against the Big Red. He’ll be the key for Union. Coach Rick Bennett’s team is 17th in the pairwise, just outside the bubble, depending on which way conference tournament’s break they need to win here to extend their NCAA hopes.

Cornell had another solid year, capturing regular season co-champion honors. The Big Red were powered by sophomores Morgan Barron and Cam Donaldson as well as senior captain Mitch Vanderlaan. In goal, Coach Mike Schafer rode sophomore Matthew Galajda for the majority of the season. The Big Red have enough talent to beat anyone in the nation, Cornell is 12th in the pairwise and should be just inside the bubble.

These two split the season series as well. Yale won 2-1 in Potsdam, NY on December 1, while Clarkson won 4-2 in New Haven, CT. On January 18. Yale just beat up on RPI to earn a dance with the Golden Knights. The Bulldogs got big games from their usual suspects led by Joe Snively, Tyler Welsh, Justin Pearson, and Jack St. Ivany. They will need to be more potent to keep up with Clarkson. They’ll also need big games from goalies Sam Tucker and Corbin Kaczperski who split both the RPI series and the regular season series vs Clarkson. Tucker got the win back in December.

Clarkson has the firepower to beat anyone. Nico Sturm powers the Knights attack, with Harold Egle, Devin Brousseau, and Jack Jacome up front. With offensive help from the blue line from Aaron Thow and Greg Moro. Jake Keilly is one of the best goalies in the country. Keilly’s numbers speak for themselves. A 1.923 GAA, a .928 Save Percentage, and nation-leading 22 wins. It’s a big ask of a subpar Yale team. Clarkson should make the NCAA postseason being at # 11 in the pairwise.

Like all three previous match-ups, these two split their regular season meetings. Dartmouth won 7-6 in OT at home to open the season in October. Harvard won 4-1 at home at the start of February. A lot has changed since then. To start with, the Big Green had tremendous play from multiple players in their three-game series against St. Lawrence. Freshman Drew O’Connor has been the cream of the crop the last few weeks scoring six goals in five games. His pairing with Quin Foreman has resulted in a slew of points for both. Will Graber has been on just as hot a streak as O’Connor. In net, Adrian Clark has had a quiet yet dominant season recording a school record six shutouts.

The Crimson boasts one of the nations most potent offenses. The scary part is that it starts from back to front. Hobey Baker hopeful Adam Fox has 40 points on the year, second most for a defenseman, Reilly Walsh has 29, and Jack Rathbone has 19. At forward, senior Lewis Zerter-Gossage is one of the top talents in the country, though without the press. Jack Drury, Jack Badini, Casey Dornbach, and Frederic Gregoire are all capable of big games. The question for the Crimson is the same as it has been all year. Goaltending. While Michael Lackey answered the question of whether or not he can live up to the expectations (he can), he is out injured with no time table for a return. That leaves it up to back up Cam Gornet. Gornet has played better than most believed he would, going 3-1 since replacing Lackey. The Crimson are at 14 on the pairwise so they are a bubble team. A strong tourney goes a long way towards ensuring their spot.

J.S.- Dartmouth in 3 It comes down to goaltending.