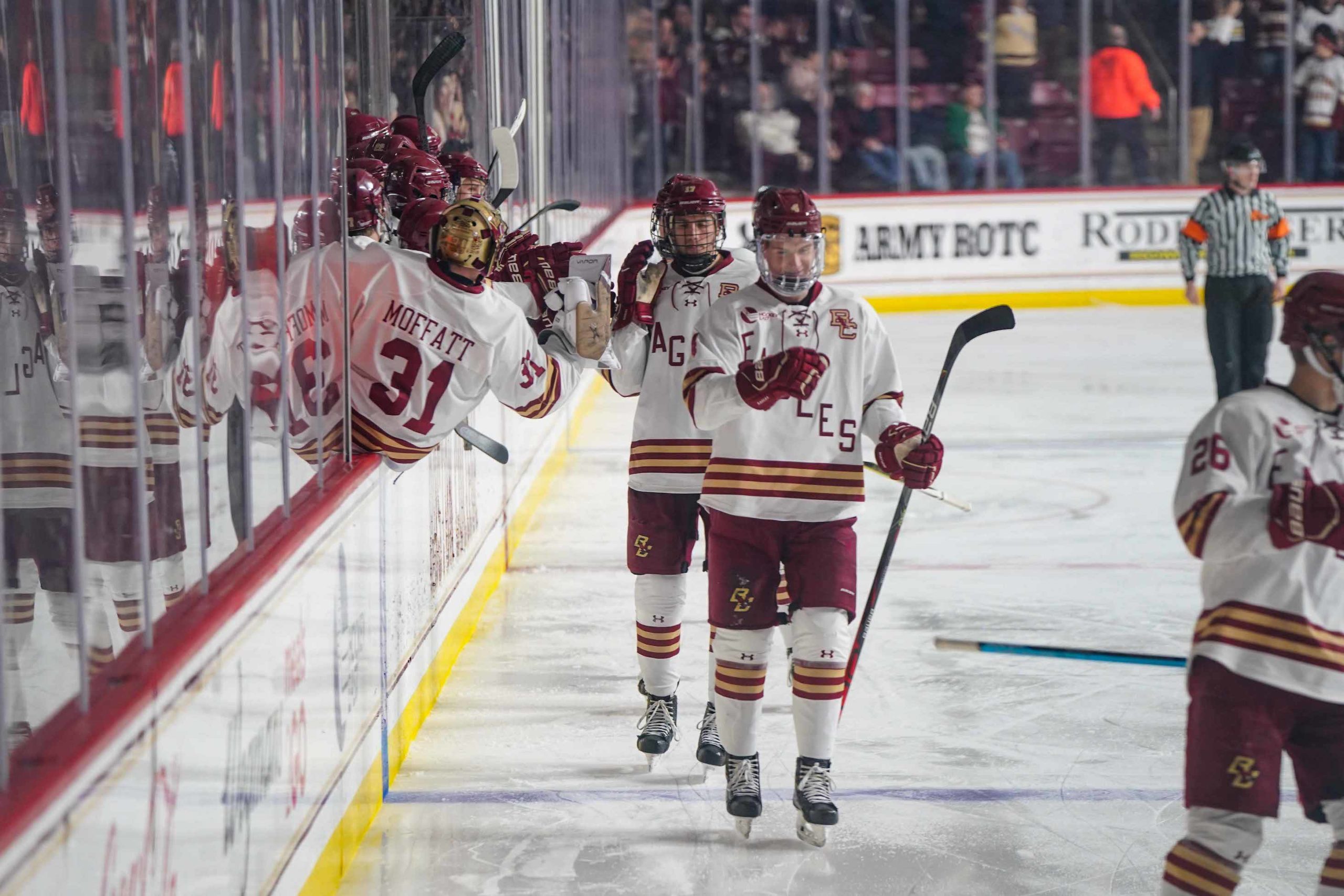 Boston- Amidst the madness of the Hockey East standings, Boston College has been a consistently excellent team. The Eagles rode an eight game winning streak entering Saturday night, including a 6-1 win over Merrimack on Thursday and an eye-popping 10-1 destruction of Northeastern a week ago. BC rolled into Agganis Arena looking to secure some hardware against their ancient rival, Boston University. Mission accomplished.

Before puck drop, the Terriers honored their four members of the 1980 US Olympic Gold Medal Team with a touching ceremony and the unfurling of a new banner in the Agganis Rafters.

“Me personally, I was just in awe of those guys,” commented BU Captain Patrick Curry. “Everything they’ve done for the university as well as the country is unbelievable. Those are the types of guys who played here before me and made me want to play here. Being an American born player, those are my heroes.”

BU took the electric atmosphere in the building and used it to outshoot the Eagles in the opening period 8-5. Spencer Knight held his own and kept the game scoreless long enough for his offense and BU misfortune to tip the scales. Right at the seven minute mark, David Farrance slipped trying to corral the puck. Alex Newhook jumped on the loose puck and created an odd-man situation with Matt Boldy. The pair of freshmen passed between each other and Newhook potted his 19th goal of the season.

The second period was similar. BU out-possessed and out-shot BC but hit a brick wall called Spencer Knight. This time, 14-8. But BC was the only scoring team. Connor Moore uncorked a shot from the point that snuck through BU goalie Sam Tucker to make it 2-0 Eagles at 7:48 of the frame.

BC had the jump in the third and appeared ready to put BU in a sleeper hold early in the final stanza. The top Eagle line played a transition possession beautifully and David Cotton made the game 3-0 only 4:40 in. BU did push back. Connor Moore took a tripping minor near the mid-point. Five seconds into the ensuing power play, David Farrance blasted a one-timer on net. Patrick Curry tipped the puck to score his 18th goal this season.

BU pushed the offensive pace for the rest of the period and nearly had a couple goals, but could not beat Knight. The freshman from Darien, CT, recorded 30 saves on 31 shots faced. Graham McPhee ended the night with an empty netter to secure a 4-1 BC victory.

The Terriers drop to 12-12-8 (9-8-5 HEA). The loss drops BU down to a point tie with Providence for 6th in Hockey East. The Friars have the advantage in the win column, so BU sits in 7th, three points from missing the playoffs completely but three points from hosting a playoff series.

Head Coach Albie O’Connell was surprisingly upbeat after the game. “I thought it was a pretty good college hockey game. You’ve gotta tip your cap. They played well through the neutral zone. I like our team. I thought we got better this weekend even though we didn’t get the result we wanted.”

BU concludes their regular season next weekend with a home-and-home series against in-city rival Northeastern. “We owe them some payback after the Beanpot,” commented BU Captain Patrick Curry. Puck drop at Matthews Arena is at 7 pm on Friday night, and on Saturday afternoon at Agganis Arena at 4 pm ET.

Boston College improves to 23-8-1 (16-6-0 HEA). The win secures the Eagles’ 17th Hockey East Regular Season Championship. The 23 wins are the most in a season since the 2016 edition of the team secured 28 and a Frozen Four bid.

“We’ve had a lot of really good battles over the years,” said Head Coach Jerry York of the game. “Both teams played their hearts out. We had great goaltending both sides. Teams stayed away from unnecessary penalties.”

York added praise for his captain, David Cotton. “He stayed because he wanted to win some trophies. We didn’t get that Beanpot trophy, now we’ve got the Regular Season. I thought Dave was really outstanding and I’m so happy we could reward him.”

BC concludes their regular season with a home-and-home against the New Hampshire Wildcats, who sit one point outside the Hockey East Tournament. Puck drops at Conte Forum on Friday night and at the Whittemore Center on Saturday night at 7 pm ET.