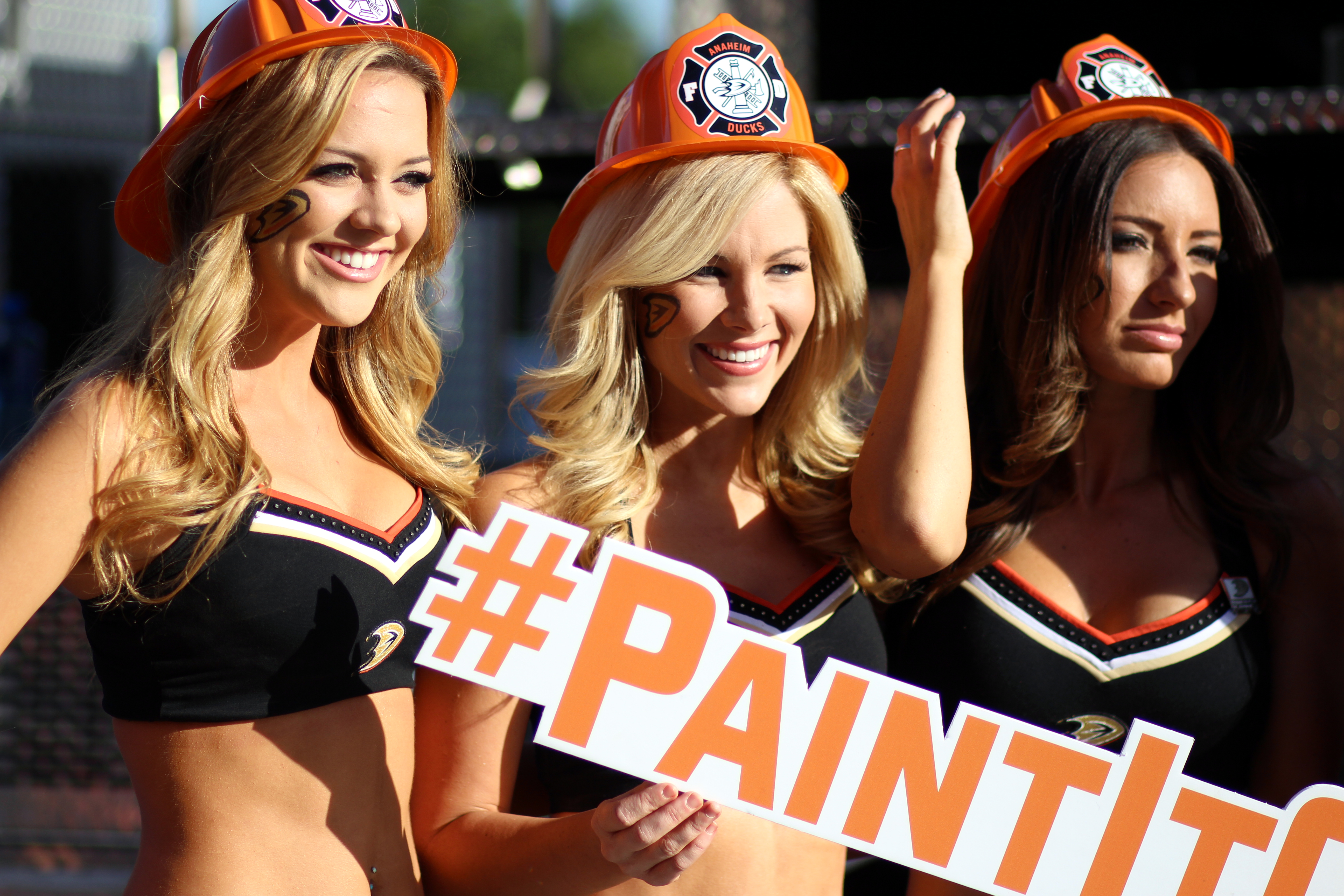 The Ducks finally, belatedly, started their home season on Sunday, a week and a half after they opened. Coming into the night, they had played five games already, so it’s not odd that their fans have waited, some impatiently, for the games (here) to begin. Too bad they brought a 1-3-1 record into this sixth contest, against Vancouver.

The team is tough to figure this year. They’re missing Hampus Lindholm due to a contract dispute, and Rickard Rakell also. The latter held out but was also dealing with problems related to an appendectomy and is just now signed and seeking a work visa to get him over from Sweden.

As if that’s not enough, the team has already done a bit of a roster shift between their NHL lineup and the one in AHL San Diego. Mason Raymond, Nick Sorensen, and Jacob Larsson were sent down this week, and Shea Theodore, Joseph Cramarossa, and Michael Sgarbossa (no, this is not an episode of The Sopranos) were recalled.

The latter two, according to Coach Carlyle after Sunday’s game, had been very close in training camp and had been told that they were. He said that they’d been told, “Don’t worry. It’s only 65 miles here. Things change in the game of hockey, and we felt that we could tap on those players at any time, and they could give us a lift on our speed standpoint.”

Sunday against Vancouver, all three played, Theodore on D and the other two as forwards. It was Cramarossa’s debut in the NHL, while Sgarbossa has ten games under his belt after making his Anaheim debut last April. He came over from Colorado when Mat Clark left for Denver. Nine of his previous NHL games were with the Avs.

Cramarossa notched 8:20 of playing time and said afterwards that he didn’t know he was playing. “I did morning skate as if I was or wasn’t playing. It’s going to be the same ritual for me being here for the first time. I wasn’t one-hundred percent, but I did my rituals as if I was, and when I got here, the lineup was on the board.” He did not have any family at the game. “Too short notice,” he said.

He further said, “That opening ceremony was pretty crazy, seeing all those lights. And I just thought to myself how long I’ve waited for this. I’ve been waiting so long. I was lucky to make the team out of camp. Numbers game, got sent down, and did what I had to do to get back. It’s a day I’ll never forget.” He is nearly 24, was picked by the Ducks in 2011 (3rd round), and comes from Toronto.

Sgarbossa got about seven minutes on the ice, and won three of five faceoffs he took. He was on the fourth line alongside the other “ossa” and Jared Boll.

The Ducks scored four goals in total, one on the power play. They also gave up one shorthanded, so as Cam Fowler said after the game, “That kind of evened out.”

The first goal was from what used to be the team’s third line but is now its second—Cogliano, Kesler, and Silfverberg. They were reunited after starting the year apart. Earlier in the year, Silfverberg had been playing with Vermette (who was on line three with Garbutt and Wagner on Sunday) and Raymond.

In fact, scanning the Anaheim lineup, it looks like the Ducks have just one top-six line, another one that’s really line three but is now labeled as number two, and two fourth lines. So that’s the Getzlaf line first, the Kesler line second.

The third line could potentially shift still, though, as one Ducks’ insider I talked to commented. That would mean perhaps Garbutt going down to line four, one of the “ossa” rookies being sent back to San Diego, and Rakell coming on to play with Vermette and Wagner as line three. Or call that line two, with the reunited Kesler line as three, where they should be. No disrespect—that’s a key spot in a Carlyle team, going all the way back to 2006-07, when the Ducks won the Cup.

Goal number two on Sunday came on the power play, and three and four were both the products of the team’s first line. Perry and Getzlaf you know were there, but the third member? Nick Ritchie. And he got the game winner. It was off a shot that bounced high and froze people. Ritchie spun around and got the shaft of his stick on the puck, knocking it in. It wasn’t all that pretty, but as Getzlaf said, it came because he was in front of the net, where he needs to be.

The captain said further of Ritchie’s play that, “This does a lot for his psyche. As linemates, I thought this was his best game. He protected the puck, and any time our line can do that, we’re not skating up and down the rink all night. We held onto it, made plays, and got rewarded for it.”

Ritchie himself was reserved in his comments. “It kind of went off his [Getzlaf’s] stick. I was in alone on the side of the net there. I just kind of took a whack at it and directed it towards the net. I got enough of it to get it across the line.”

He also talked about the line and his play there. “I think obviously it’s always nice to score a goal. I haven’t been disappointed with my play or anything, but it’s nice to get one, and as a line tonight, I give those guys a lot of credit. They were really good tonight, and when they play like that, we’re a tough team to beat.”

He said, “I think I’m getting used to it. They’re obviously premier players. Tonight we looked good, and hopefully we can build off that and keep it going, for sure.” He finished by saying that it helped his confidence to keep playing with this tandem. “It’s good that I’m staying there, and obviously tonight helped with that.”

Carlyle said, “They’ve been playing together right from the, all five games, this the sixth. They’ve been producing lots of chances for our group. If the chances continue to come, they’re going to provide a lot of offense for our group.” About Ritchie in particular, he said, “For a young kid, I think he was pressing. Again, he goes to those dirty areas, and he complements that group. If you play with Getzlaf and Perry, you should be able to provide some offense, so we’re not going to get too high on him yet.”

Theodore was in after having been beaten out of a job in training camp. He was bested by Jacob Larsson, who played in the team’s first four games before sitting against Philly. He was sent down, Carlyle said during the week, because the speed of the game, particularly the puck movement on the small ice, was something he needed to get used to. The team wants him on the ice a lot in San Diego until the tempo becomes familiar.

The addition of Theodore also had the benefit of giving the team power play strength, the Coach said. This came at the expense of dressing Holzer. “Those are the decisions that are tough ones. Players can’t get discouraged. Their contributions have been well noted,” Carlyle explained.

Notable absences? Well, Raymond, having been signed in July, 31 years old and with nine NHL seasons. As was said, he’s with the Gulls. Emerson Etem, Long Beach native, Ducks’ draftee, and now wire-waiver journeyman. He played in games four and five, about six minutes each, and recorded no points. He was in the press box, the “LB” tattoo behind his right ear a sign that he’s close to home. Holzer, sitting. And Despres, who is dealing with concussion-type troubles again.

And that’s the Ducks this year. They’re now 2-3-1, so hanging in there and hoping for a start better than the mess they created for themselves last year, but also missing the speed and offense that would allow their top line to be given some relief once in a while. But that’s what happens when you make McGinn, Pirri, and Perron disappear, as has happened with this team since last season.

Vancouver leaves with a two-night, single-point effort in SoCal, having dumped a shootout game to the Kings on Saturday.

After starting on the road, the Ducks now play yet another game there, against San Jose on Tuesday. They then are at home for five of six, with the only interruption to that one game up in LA.